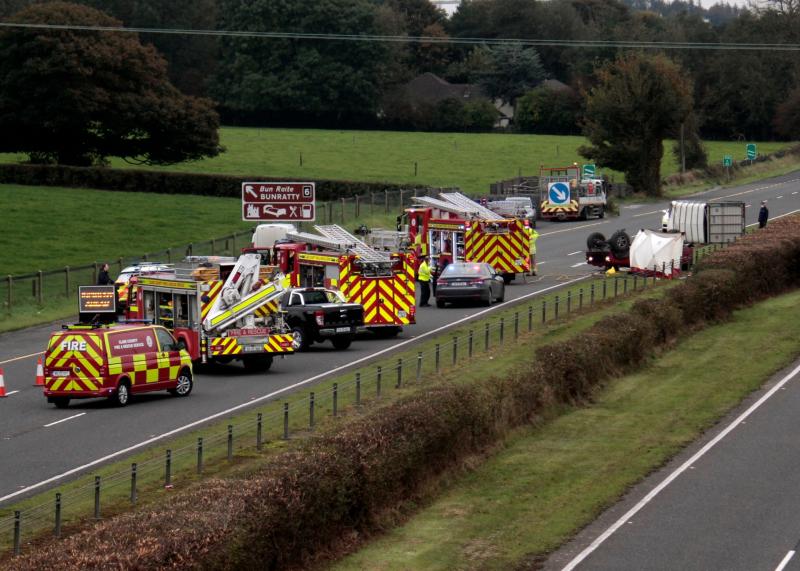 INVESTIGATIONS are underway after a man died following a road crash on the N18 on the outskirts of Limerick city.

The single-vehicle incident happened shortly before 2.15 this Friday afternoon near the exit for Bunratty on the Limerick-bound side of the dual carriageway.

The deceased, who was aged in his 40s and from County Limerick, was the sole occupant of a 4x4 type vehicle which was towing a cattle trailer at the time of the crash.

Emergency services including gardai, paramedics from the National Ambulance Service and six units of Clare Fire and Rescue from Shannon and Ennis all attended the scene.

"A man in his 40s was pronounced dead at the scene. His body has been removed to University Hospital Limerick where a post-mortem will take place at a later date," said a garda spokesperson.

The dual carriage way has been closed since, between Junction 7 (Sixmilebridge) and Junction 6 (Bunratty), to facilitate forensic and technical examinations of the scene.

This has resulted in lengthy traffic delays during the traditional Friday evening commuter rush.

Gardaí at Shannon are investigating the circumstances of the accident.

They are particularly appealing to any road users who were travelling on the road at the time with camera footage to make it available to them.