Former Limerick senator and councillor Mary Jackman has passed away 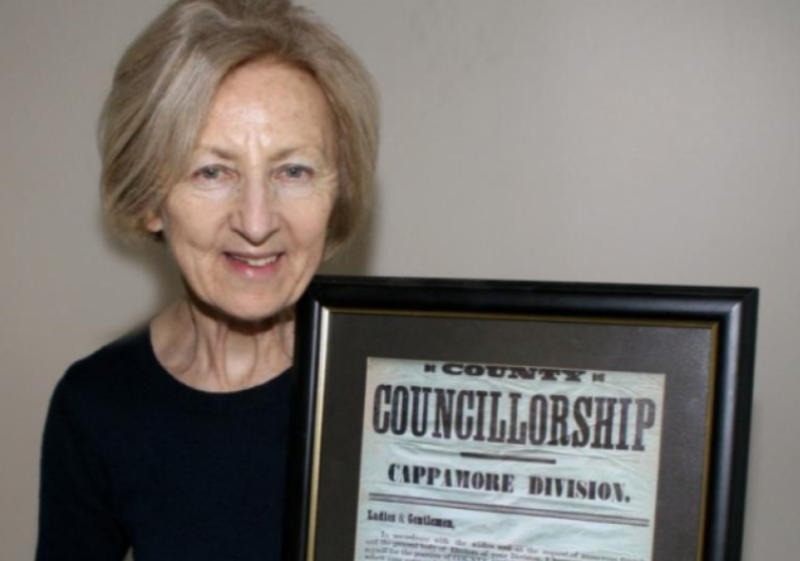 FORMER senator and councillor Mary Jackman has passed away.

The former councillor for Limerick City and County Council passed away peacefully at Milford Care Centre today at the age of 79.

Ms Jackman was one of the longest serving councillors for the local authority when she retired in 2014 after almost 30 years of service.

Cllr Jackman was first elected to County Council in 1985, and topped the poll at the 2004 and 2009 local elections.

In 1999, Ms Jackman was elected as Cathaoirleach and she was the county’s first citizen as Limerick saw in the new millennium, and at the time, was also the first female chairman of the county.

It happened on the 100th anniversary of her grandfather, Patrick Duggan being elected to the first ever County Council, something which made her doubly proud.

A teacher by profession, she spent her entire career at Presentation College

Since stepping away front front-line politics, Cllr Jackman remained a presence in the community of Newtown, Castletroy, where she lived since it was first built.

Mayor of Limerick City and County, Daniel Butler paid tribute to Ms Jackman saying she was "always full of  energy and life".

"I've known Mary since I was very young. When I was running for the Dail for Fine Gael, and being out canvassing with her, and getting to know her.

"Anyone who would have come across her no more than myself would straight away recognise she was a very warm engaging person. Full of life, full of energy. Very caring and considerate as well as a person.

"Later in her years, she was very supportive and anxious to offer her support and guidance.

"One of my final memories of her was her running in the Great Limerick Run a few years ago. She was a very active women. It's sad, she is the sort of person you thought would live forever, such was her liveliness."

Always full of energy, positivity and warmth. Spent many a time canvassing for her and with her. When I was young she was always so encouraging and again later in life when I entered politics.

She will be sorely missed. My sympathies with Nick and Nicola. https://t.co/0Mcc5PDc4Z

Senator Maria Byrne was a close friend of Ms Jackman and said she touched the lives of many people from her teaching days to her political career.

"She was a great personal friend of mine as well as my father, I send my condolences to her husband, daughter and sister.

"Mary was a trojan worker both as a councillor and a senator. When I got elected to the senate she was so delighted that somebody else from Limerick was following in her footsteps."

A post on Rip.ie read: "Reposing in Griffin’s Funeral Home, John’s Gate on Thursday 2nd June from 4:30-6:30pm. Mary’s Cortege will pass the family home to arrive at Mary Magdalene Church, Monaleen, on Friday 3rd June for Requiem Mass at 11am, this will be streamed live.

"Family flowers only please; donations if desire to Milford Care Centre or The Alzheimer Society of Ireland".