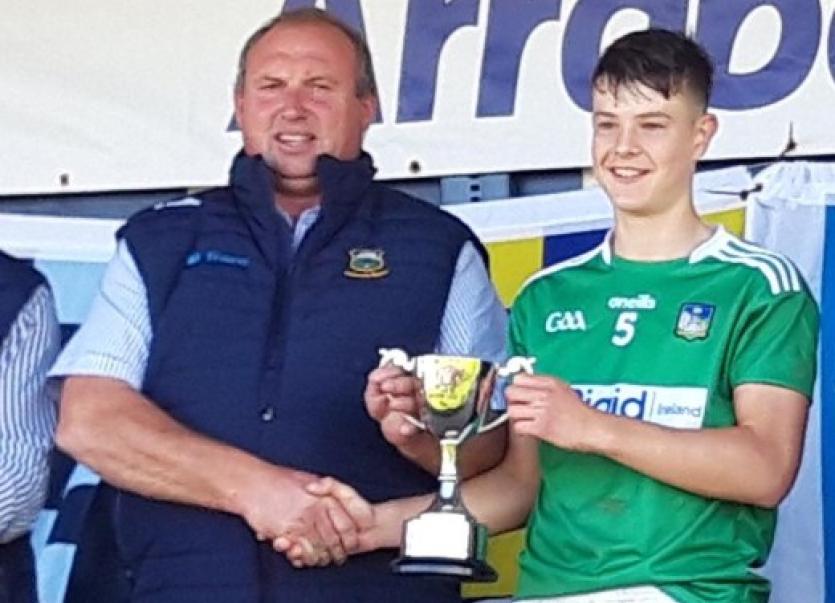 Joseph Fitzgerald accepts the Arrabawn Shield for the Limerick U15 hurlers

The Limerick U15 A hurlers fared.

Limerick Green played Offaly in the opening game of the Arrabawn Shield in autumnal conditions in Upperchurch-Drombane.

Adjusting to conditions from the throw in, Limerick Green started brightly and kept the scoreboard ticking over with fine scores while our defending was resolute at all times, limiting our opponents scoring opportunities.

Offaly did manage to score two late goals but it wasn't enough to prevent Limerick Green progressing to the final of the Arrabawn Shield.

Our final opponents, Wexford, had beaten the tournament hosts, Tipperary, in the other semi final and were in a confident mood of bringing the Shield back to Slaneyside.

However, manager Donal O'Grady assisted by coaches Liam Raele and Ger Downes have worked very hard and diligently over the past 10 months, each player was well prepared for this tournament. The large attendance in Boherlahan were treated to a cracking hurling match.

Limerick Green got off to a great start, dominating the early exchanges and this reflected on the half time scoreboard ,we were in a commanding lead of 3-7 to 0-8. The strong cross pitch wind slightly favoured our opponents in the second half and when we conceded an early goal , there was a fear that our momentum was lost however the boys responded brilliantly and the sideline management ensured that the boys kept their heads and raised their game to withstand the Wexford pressure in a titanic battle.

The game finished on a scoreline of Limerick Green 4-12  Wexford 2-13.

Joe Fitzgerald of Monaleen accepted the Arrabawn Shield on behalf of the squad,  each and every player to be complimented for their sportsmanship and standard of hurling in this final match.

Limerick White had an early start and were in Littleton for a 10.30am throw in against the hosts, Tipperary for the opening game of the John Doyle Shield. We played into a stiff breeze and while we scored the opening score of the game, the physically bigger Tipperary team  dominated for most part of the opening half, leading by 9 points at one stage, however, this group of boys managed by Liam Hammersley  assisted by coaches Ger Hickey, Mark Keane and Thomas Franklin responded,  not only bravely but they performed brilliantly to reduce the lead to 5 points at the midway interval and incredibly we led by 1 point in the final minute of normal time however a number of controversial moments favouring the host county brought the game to a dramatic draw at full time.

The Tipperary defeat resulted us in playing Clare in the 3rd /4th playoff in Upperchurch-Drombane.

The opening match defeat had a knock-on affect and we were slow to get into the match against close neighbours Clare, however the boys responded brilliantly in the second half and turned around a 4 point deficit  at half time to win on a scoreline of Limerick White 2-17 Clare 1-12.

Following impressive victories over Offaly and Galway, the U16 panel qualified for the “A” semi-final versus Cork in Mallow.

The Limerick players put in a great effort from the very start and took a grip of the game around the middle third
of the field through excellent hurling from Michael Bashkiv, Ronan Lyons and Billy Molyneux.

A David Boyce goal helped Limerick to a 3 point lead at half time.

Despite tremendous performances from Lochlann McHale, Adam English and, particularly, Paddy O Donovan, a Cork comeback brought the rebels level with 10-minutes remaining and, at the final whistle, Limerick were behind by two points on a scoreline of 2-12 to 1-13.

A “Shield” final v Clare awaited Limerick shortly after and, unfortunately, the Treaty players were defeated on a scoreline of 3-17 to 2-9. An excellent second half performance that, with more luck, could have yielded more green flags for
Limerick brought our tournament to a conclusion.

Ethan Dorney, Darragh Butler and Adam Fitzgerald played great games against the Banner lads and, indeed, our entire 24 player squad all made significant and notable contributions throughout the day and can be very proud of their efforts.

A panel of twenty two U14 hurler's made the journey to the fabulous venue at Waterford IT Arena.

The draw saw Limerick with a 10am start against host Waterford, and the early start was very telling during the first exchanges of the game half as Waterford's attack led the charge and only for stout defending by the full back line of Fintan Fitzgerald, Sean Og Blackmore and, playing a captains part, Jack Daly they were kept at bay, ably assisted by some terrific goalkeeping from Lorcan Costelloe. Despite the early onslaught which saw Waterford raise a green flag Limerick came into the game and took control of the match coming up to half time, Bradley Moran struck a couple of long range pointed frees with forwards Ciaran McMahon and John Wright were getting on a lot of ball only to be fouled as they drove goal wards.

Vice captain Pierce Connery showed leadership in the full forward line winning his battle against the opposition full back and striking over two frees as well as one from play. Just before half time Connery suffered an ankle injury which was to curtail his influence in the game and rule him out of the upcoming second match. Limerick finished the half leading 1-6 to 1-4.

The second half was a titanic  battle, Limerick having lost two players with injury and playing against a stiff breeze were repelled back by the physically stronger Waterford team, Waterford started to find their range and getting the better of Limerick in a number of areas, Limerick rallied mid-way through the half and a Connery goal from a placed ball brought the game back to one score with ten minutes left.

Despite some excellent paly from Limerick's centre half back Shane Fitzgibbon and tireless effort from mid fielders Michael O'Riordan and Paul O'Neill Limerick could not get back on terms losing out to a final score line of 3-11 to 2-7.

Limerick's second game saw them taking to the field 45 minutes following the defeat to Waterford, now without forwards Connery and Josh Sheehan due to injury, and Ciaran McMahon carrying a thigh injury which saw his withdrawal early in the game it was going to be a stiff test against a fresh Offaly, while Limerick continued to play the style they have been developing all year a stronger fresher Offaly team put Limerick to the sword as they picked off points from around the field.

Trailing 2-5 to two Shane Gleeson frees at half time Limerick again played into a stiff breeze and despite the strong running of Ben Murnane and Mark Field as they attempted to work the ball into the Offaly '21 they were stifled a number of times by a resolute defence.

Offaly played excellent running hurling and their speed, first touch and fantastic fielding was to be admired,  the now heavily depleted Limerick team were no match for the eventual tournament runners up, Limerick going down on a score of 2-11 to 0-2.

While the year did not finish as the Limerick U14 Development Squad may have hoped 187 young men got an opportunity to trial for Limerick with every player getting a minimum of two trial matches,  48 boys made the eventual panel and over the ten months huge progress has been made by all players as they learn and develop under the auspices of Limerick Underage Academy.

We traveled to the grounds of De La Salle in Waterford early on Saturday morning for the end of season tournament.

Our opening game was against a hugely physical Dublin team. Dublin started strongest and led 0-4 to 0-1 after 10 minutes of play and when they added a goal shortly afterwards it looked ominous for Limerick, but to the lads' credit they showed great courage and determination to fight tooth and nail right to the end.

The final score was 1-6 to 0-3 and but for some wayward shooting and a couple of missed frees we could have made it a one score game heading into the last few minutes and who knows what might have happened.

We then had a short turnaround to face Waterford, who were playing their first game. We played against the breeze in the first half and generally played pretty well but Waterford's greater scoring power left them 0-10 to 1-2 ahead at half time.

Conor McMahon had Limerick's goal with a super high catch and finish and Ben Murrihy was denied a second goal right on the stroke of half time when after a searing run through the Waterford defence his shot was brilliantly saved by the goalkeeper up onto the crossbar and agonisingly away to safety. With the aid of the breeze in the second half we needed to start well but some wayward shooting including 3 efforts that dropped short dented our challenge.

A missed penalty in the final minute was a further indication of how the day went, super work rate and effort but ultimately just not clinical enough with the chances we created. It finished Waterford 0-14 Limerick 1-4.

All 24 players that played on the day can be proud of their efforts, their behavouir and discipline on and off the field was exemplary.

* All text supplied by Limerick GAA