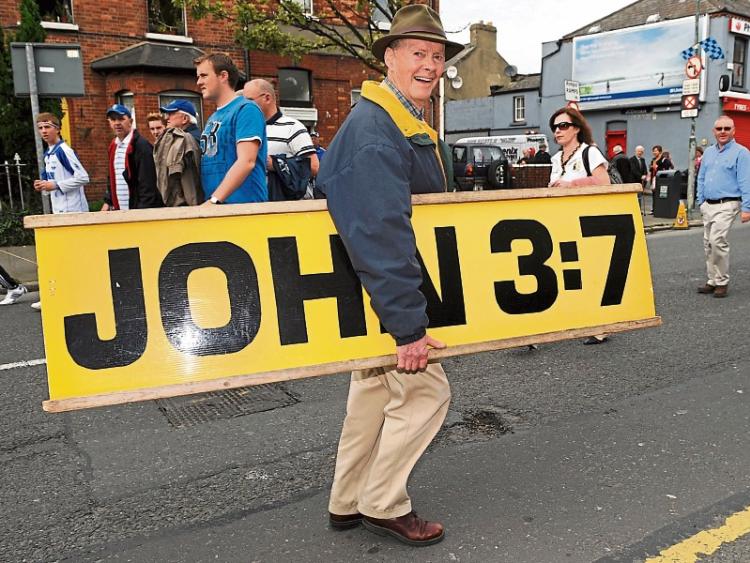 MUCH has been made of the 3-16 scoreline in the All-Ireland final between Limerick and Galway matching Frank Hogan’s original John 3:16 sign.

But he died on Saturday, March 7 which using the American date system is 3/7 and Frank’s most famous placard is John 3:7. This would have made the Christian Evangelist smile.

Few supporters have resonated with so many as the late Frank. It was a remarkable achievement by somebody as softly spoken and and unassuming as Frank was. Yet for decades there was hardly a Sunday that went by that Frank wasn’t in the throng of a terrace.

And proudly out in front of him was his bright yellow John 3:7 sign meaning, “Do not marvel that I said to you, you must be born again”.

In an interview with the Limerick Leader back in 2009, Frank said: “I’m surprised that the Lord has made John 3:7 so acceptable to everybody. It’s quite extraordinary. Usually when Christians go out to evangelise, they say to them did you get many conversations and that makes me laugh. Some days when I come home from a match my voice is gone!”

He was laid to rest in Mount St Lawrence after removal from Thompson’s funeral home this Tuesday afternoon.

Everybody was fond of Frank. But that was not always the case.

In a moving graveside oration, his long-time friend Gerry Nugent said: “Though oft abused in those early days at matches Frank Hogan did go with a big yellow sign with a text from God’s word, the bible.”

He continued: “Was he a fool carrying a sign – but only in the eyes of those who were / are still dead in sin. ‘Tis no fool that will nail his colours to the mast and stand up for God and his word in a land of idolatry and wickedness. Year after year Frank trod the roads for God – Munster finals, All-Irelands, club games, often in the wet and cold.”

Mr Nugent described Frank as a husband, a father, a brother, and for many years “a loyal servant of his Lord and saviour Jesus Christ who has gone home to heaven and is in God’s wonderful presence right now”.

The 81-year-old is survived by his wife Myrna, son Jason, and daughter Natasha.

In his oration Mr Nugent addressed the most common question – why did he carry that sign?

“Because Frank Hogan was born again, saved by God’s free grace, having received the gift of God. He wanted everybody in the world to know about this wonderful salvation found in Christ alone,” said Mr Nugent.

After the Leader broke the sad news on Monday, tributes flowed in for Frank. He was a little part of every sporting fan.

Originally from Borrisokane he made his home in Castletroy and over the last three decades he followed Limerick through the good times and the bad.

Sadly as his health failed in recent years, Frank was not able to attend the All-Ireland final between Limerick and Galway in 2018.

Prior to his John 3:7 sign, Frank had a John 3:16 sign. John Cregan, chairman of Limerick GAA, said wasn’t it ironic that Limerick scored 3-16 in that match.

John 3:16 states: “For God so loved the world that he gave his one and only Son, that whoever believes in him shall not perish but have eternal life.”

That All-Ireland final win did give eternal life to so many.

Mr Cregan said as long as he is going to matches he can “vividly remember seeing Frank and noticing him on the train because he had the big long placard with him”.

“You would always see him. He persisted. Some of these things come and go but he was a constant. He persisted in spreading his message in a very novel kind of way,” said Mr Cregan, who on behalf of Limerick GAA expressed his sympathies to the Hogan family.

“He was somebody who was always there. He always managed to get that shot on camera. Even if you weren’t at a game you would see him because he was always picked out from the crowd. He obviously believed very much in spreading his message.

“It was an ideal way of doing it, travelling the length and breadth of the country. From our point he view he was quite an iconic figure, standing with his placard all of the time. It is sad that Frank has passed to his eternal reward but he will be fondly remembered by everybody in Limerick GAA and, indeed, the wider sporting community throughout the country,” said Mr Cregan.