‘Late broadcaster will be sorely missed in kitchens of Ireland’ 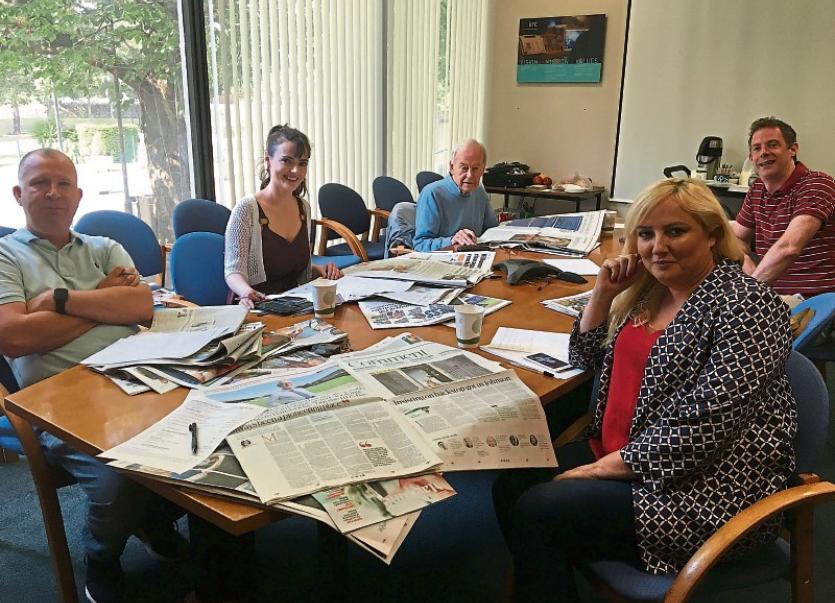 LAST July 25 a call came through on my mobile from a researcher from the Marian Finucane Show.

That morning it was announced that Adare Manor would host the Ryder Cup in 2026.

“Would you be available on Sunday morning to join us on the panel for the show,” asked the researcher. “We are keen to get more of a mix of voices from around the region.”

Hands up, I got nervous.

My thoughts immediately turned to the 300,000 or so listeners around the country who tune into the show of a Sunday morning.

While being on national radio isn’t completely new to me - I’ve been on most of the main radio chat shows, Drivetime, Sean O’Rourke, Tubridy, Matt Cooper - there was something about the Marian show that got the heartbeat racing and adrenaline rushing.

Marian was a very familiar voice in my kitchen and car of a Saturday and Sunday morning. Be it pottering about doing the housework, or driving to Limerick or Charleville for the weekly shop, Marian was always on the dial.

On a purely artificial level, I loved the smoky tone of her voice, and the manner in which her intonation would rise and fall depending on her curiosity or disapproval. Anyone on Twitter will know how her bouts of coughing used to drive some people to distraction, but in this age of perfection, I felt it added a nice sense of informality.

Of course, on an intellectual level, she was tremendously smart. And that’s what really had my nerves jangling. Any radio show I had done until now, I had known my subject, I had written a story about it and was confident enough to handle even a curveball were it to come my way. But with the panel set-up on the Marian show it would be a complete game of curveball.

In fairness to the producer she offered a few topics which could be up for discussion while warning that the contents of the Sunday papers would be key to the panel discussion.

The Ryder Cup was a given and then there was Brexit and Boris, the FAI scandal and...wait for it... parklands in Zimbabwe!

“The Government in Zimbabwe is selling off the country's public parks, and there's concern about what will happen to the animals and the land,” said the researcher, “that might be discussed.”

Life is about challenges so I bit the bullet and said ‘count me in’.

Even before the phone call, I was Dublin-bound that weekend with the Limerick hurlers playing Kilkenny in the All-Ireland semi-final on the Saturday.

They lost. After the sickening defeat in Croke Park I headed to The Talbot Hotel in Stillorgan to begin my night’s study ahead of Sunday's show. With the Saturday papers scattered out across the bed, it was the year 2000 all over again, and the night before my Leaving Cert.

Next morning, the alarm went off at six bells and it was time for a Full Irish with the Sunday papers.

A taxi - also organised by RTÉ - arrived at the front door of the hotel at 8.45am to take me the short distance to the RTE radio studio for the 9am briefing.

Already inside the conference room, filling up a cup of coffee, was Conor Brophy,  director of Strategic Communications at Teneo. It was Conor’s third time on show. We all remember that one person from our first day at school or work who took us under their wing, and for this newbie on the Marian show, it was Conor.

“Does Marian come in for the briefings?” I asked, mad keen to meet the woman herself. “No, when Brendan O’Connor fills in for her, he comes in and meets the panelists but Marian doesn’t,” Conor replied.

“Interesting,” I thought to myself, not sure if I liked this approach. The other guests arrived over the next 20 minutes or so - Noel Dorr, former ambassador to the UK and secretary general of the Department of Foreign Affairs; Gary Murphy, professor of Politics, DCU; and Allison Morris, security correspondent with The Irish News.

They had all appeared on the show before and would have needed to be on ice to be any cooler.

A number of copies of the Sunday papers  - tabloids and broadsheets - were spread out across a row of chairs. A researcher asked us all to jot down a few lines on stories we had an interest in, which she then took into Marian for her perusal. The same researcher checked in on us around two more times before her final calling at 10.55 to accompany us to the radio suite.

With the 11am news coming to a close in walks Marian toting a fine sized handbag and some paperwork. After a quick hello to her guests, she comments that it feels a little cold, and the air con is swiftly turned up. We’re prompted to put our headphones on, the programme’s jingle begins and we’re off!

“Hello there and a very good morning to you”.

My heart is thumping so hard in my chest I’m convinced they can hear it over the airwaves at home in Kilmallock.

Marian introduces her guests and immediately turns to yours truly. “Now, before we get into the blood and guts of this, my deepest sympathies on one point yesterday... I presume there is despair going on,” she comments of the Limerick hurlers loss in Croker.

I’d love to say those few words put me at ease, but I was as nervous as ever.

The next 15 minutes are devoted to Brexit and Boris, an extension or no extension, followed by opinions on swing-gate, the FAI crisis and the Ryder Cup coming to Adare.

A researcher has brought in a glass of water and placed it beside Marian. She hasn't coughed once.

The second hour sees the arrival of veteran journalist Sam Smith in the studio to talk about his memories of British PM, Boris Johnson. On the line is artist Annabel Eyres who knows Boris since his college days.

The bones of the next half an hour is given over to Boris. And then we take a break.

The only thing that’s left to be discussed is the parklands in Zimbabwe or, in my world, the English poem you had banked on not coming up in the Leaving Cert.

As the ads continue to play, the only voice I can hear (in my head) is that of my editor, Eugene Phelan, a previous guest on the show on more than one occasion.

On the Thursday when I got the call to be on the panel, his words of advice were, “Aine, if you think she is going to bring up a subject that you’re not familiar with, be honest and say ‘Marian, don’t come near me on that one…”.

We must be down to the last ad at this stage, so the question remains,  do I put my hands up and tell Marian the cat ate my homework and risk embarrassing myself in front of one of the country’s most eminent broadcasters or do I stay schtum and risk embarrassment in front of the entire nation? I go with the former and confess my sins.

I get the arch of not one, but two of Marian’s eyebrows followed by the hint of a smile as she nonchalantly heads straight into the discussion on Zimbabwe.

Ten minutes later and it’s time to wrap up.

“From all of us here, a very good day to you,” she sings, removing her headphones and turning off her mic.