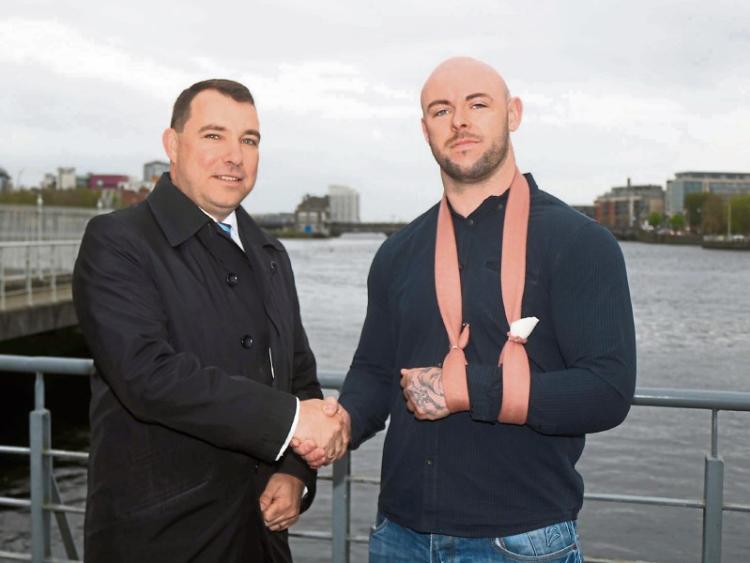 Cllr James Collins receives a thank you from Christy Reddan, who was knocked off his bike while en route to work Picture: Michael Cowhey

THE cyclist who was knocked off his bike has met up with the councillor who administered first aid in the wake of the incident.

Christy Reddan, of Upper Carey’s Road, was rushed to University Hospital Limerick with a broken shoulder and collarbone after the incident last week.

Between the fall and the ambulance coming, Cllr James Collins, Fianna Fail, who was dropping his children at the Model School, along with a few other parents, moved the man to his side, and kept talking to him.

After spending two days in hospital, Christy, a keen bodybuilder, contacted Cllr Collins through the social networking site Facebook as he wanted to thank him in person.

“I was anxious to know who helped me, because I was completely out of it,” he told The Leader.

“I was very grateful he looked after me , he kept me away from the traffic,” added Christy.

“That was my big fear when I was knocked out, that I would be hit with a second vehicle. I’m just very very grateful”

The pair met in City Hall this week, where Christy, who ironically works as a porter in UHL, thanked Cllr Collins personally.

He is likely to be off work for a minimum of six weeks with his injuries, and could be facing an operation.

Cllr Collins said: “I didn’t know Christy, I was just hoping he was okay. When he went off in the back of the ambulance, it was obvious he’d injured his shoulder and collar-bone. It was obvious he was concussed.

“He took a couple of wobbles when we tried to lift him up. But I was delighted when he sent me a message to say thanks.”

He appealed to cyclists across Limerick to make sure to wear cycling helmets, saying Christy was not wearing one and was fortunate that his injuries were not worse.

Asked if he will be taking to the saddle in future, Christy laughed: “Not a chance – no way!”