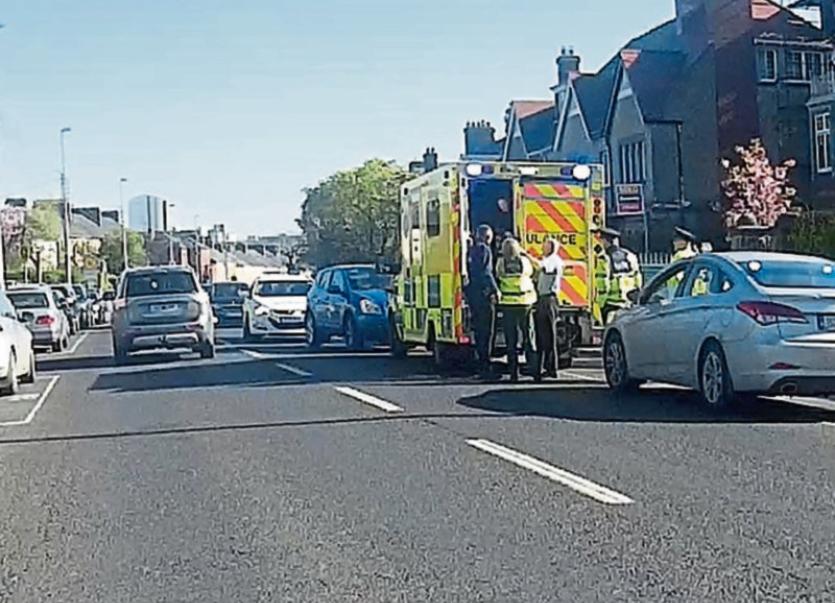 The man was taken to University Hospital Limerick after the road accident. PICTURE: TIM HOURIGAN

LIMERICK Fianna Fail councillor James Collins has been praised after administering first aid to a man who was knocked off his bike this Monday.

The City West member was dropping his children at the Model School in O’Connell Avenue at breakfast-time when he came across the cyclist, who was travelling inbound to the city.

“He seemed to have banged his head, and had a suspected broken shoulder and pains in his collar-bone. He was not well at all,” Cllr Collins explained.

Alongside a group of other parents, he turned the man into the recovery position, keeping him talking until the ambulance arrived.

“We were quite concerned about him. We felt he might be really hurt. He was certainly very nauseous,” he said. “He was in a lot of shock, as was the driver of the car.”

“The ambulance was there very promptly despite it being rush hour. They came and examined him and we gave him over to their care,” the councillor, who has had first aid training as part of voluntary groups he is involved in, said.

A cyclist was knocked off his bike by a car on O’Connell Ave this morning. Banged his head off the kerb & suspected broken shoulder. My neighbours & I administered basic first aid. Seemed badly injured & pretty shook up. Ambulance staff were excellent. Scary stuff. Hope he is ok

Cyclist Tim Hourigan, who witnessed the aftermath of the incident, praised Cllr Collins for his actions, saying: “If someone falls down and breaks their shoulder, and someone comes to help, it’s very noble.”

However, Cllr Collins refused to take personal praise for his action, insisting it was a group of people who helped the cyclist.

He said: “Regardless of who it is, you have to help out. But it was heartening to see members of the public make sure he was safe and comfortable until medics arrived.”

But the general election candidate says the incident has highlighted a need for better conditions to be put in place for cyclists in Limerick.

“We need to raise awareness a little bit about safety cycling around the city. Painting a line on the ground and calling it a cycle lane and letting your kids compete with traffic while going to school is not really a cycle strategy. If we’re serious about implementing national policy and encouraging people to walk and cycle, we need to rethink the infrastructure we have put in place,” he said.

The man was taken to University Hospital Limerick, where his condition is unknown but not thought to be serious.