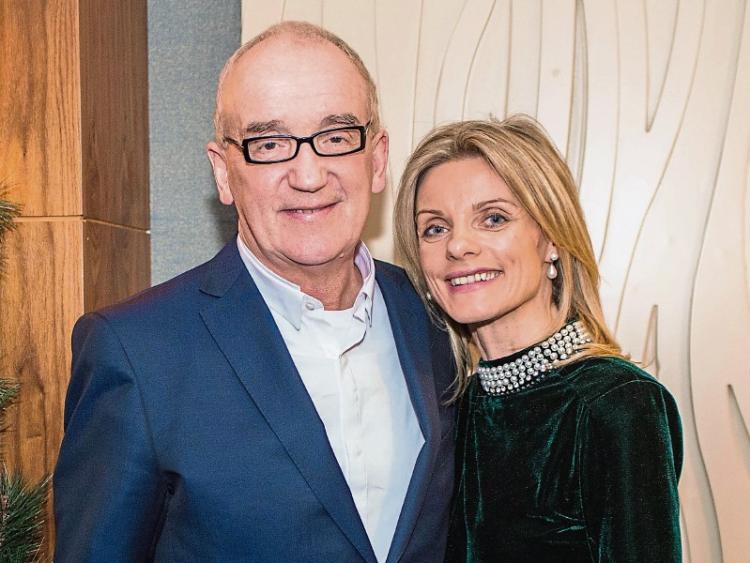 Paul O'Byrne with his wife Anna Picture: I Love Limerick

ONE OF Limerick’s top surgeons and hospital bosses, Paul O’Byrne has been laid to rest.

The consultant surgeon and founder of Barringtons private hospital was responsible for the revival of its success after acquiring the facility in 1991, following its closure in 1988.

The hospital, which has more than 50 beds, now employs more than 130 staff members and close to 80 consultants in more than 20 specialities.

Mr O’Byrne was only elected president of Garryowen FC in recent weeks but had been battling illness. A fellow of the Royal College of Surgeons Ireland, he previously lived in Galway but his home in Limerick was on the North Circular Road in the city.

Following the funeral Mass at Our Lady of the Rosary Church, Ennis Road, on Friday, the respected surgeon was buried at Aghadoe Cemetery, Killarney.

Paying tribute to Mr O’Byrne, Barringtons consultant Dr Mary Ryan said that the “patients trusted and loved him so much.

“We were devastated when we heard about Paul’s diagnosis, but because he was such a formidable person we hoped and prayed that he would overcome the wretched diagnosis. He fought very bravely and was working up to only a few weeks ago, and we were shocked and traumatised that he has gone 30 years ahead of time.

“To see such a genius with such personality and ability gone is a huge blow to all of us. Although very successful and bright, he was very humble. Probably because of the big family he came from in Galway. He described himself as ‘the plumber’.

“I have no doubt that Paul is in heaven as he was such a caring, gentle person. And I also have no doubt that he spoke to St Peter on the way in, and said ‘You have a lesion on your nose, and I know just the man who can take it off for you, and he is in the Bons at Barrington’s Hospital.”

Barringtons Hospital, after 16 years of management under Mr O'Byrne, was sold to Bon Secours for a reported €21m, following a two-year due diligence process and lengthy investigation by the Competition and Consumer Protection Commission.

Dr Ryan said that Paul was “so proud” of his daughter Lisa, who recently graduated from medicine at Trinity College, with a gold medal in surgery. She said that he was also proud of his son Barra’s successful rugby career “and they bonded as a result of that”.

“In fact, he took a lot of his medical colleagues to the tribute match for Anthony Foley in Thomond Park, one of the many memories we will all cherish.”

She concluded: “We salute you, Paul, your loss is immense and we will never ever forget you and your wonderful legacy, that is now Bons at Barringtons. We also salute the wonderful service you have given to all your patients and your medical colleagues over the years.”

“His innovative thinking was ahead of its time and he will no doubt be seen in the future as one of the pioneers in this area. He brought the dynamism and verve which he had shown in his sporting days to his work as a surgeon and medical director.”

Former CEO of the hospital, Denis Cahalane said that the surgeon “delivered a fantastic project in Limerick. It started from nothing, finished up and brought in 150 people, and never looked for any greater favour from anybody, really, for achieving that.”