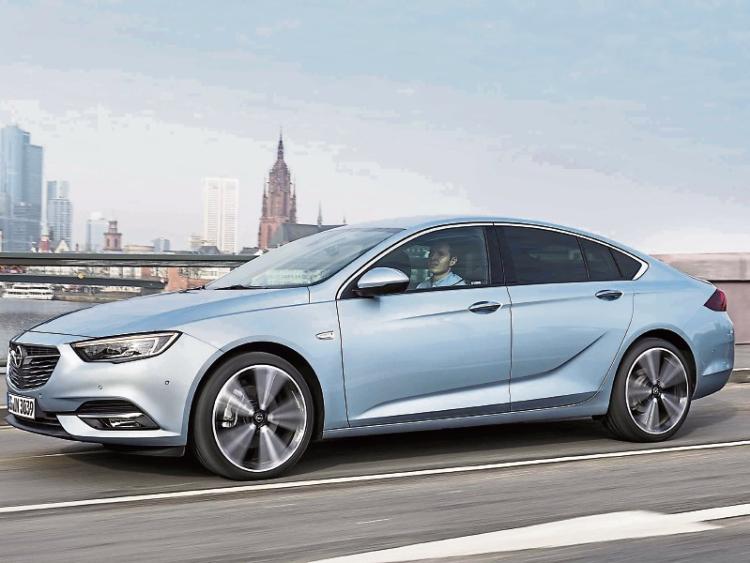 The new Opel Insignia rolls into show rooms this summer and is priced at €27,350

THE new Opel Insignia is now on sale in Opel dealerships priced from €27,350.

New Insignia is offered with a wide range of efficient latest-generation turbocharged engines and transmissions.

For petrol, the new 1.5 Turbo 140hp unit (Tax Band B1) which replaces the outgoing 1.4 Turbo unit, while the diesel choice includes the 1.6 litre in both 110 and 136hp outputs (Tax Bands A3 and A4) respectively), as well as the higher output 2.0 170hp diesel (Tax and B2). Both the 1.6 136hp and 2.0 170hp units are available in both manual and automatic transmission. The 2.0 Turbo petrol 260hp unit comes with the new eight-speed automatic transmission and AWD system with torque vectoring.

This new generation car weighs up to 175kgs less than its predecessor, has a longer wheelbase, reduced overhangs and the car’s tracks have been widened by 11mms.

It also comes with a lower driving position with wrap around cockpit, OnStar personal assistance, IntelliLink and voice command via Apple CarPlay and Android Auto together with OnStar’s 4G Wi-Fi hotspot for up to seven devices.

Driver assistance systems include a head-up display, 360 deg camera, Adaptive Cruise Control with automatic emergency braking, Lane Keep Assist with automated steering correction which kicks in if the car is unintentionally drifting out of its lane, and Rear Cross Traffic Alert which uses radar sensors in the rear bumper to detect objects coming from up to 20 metres at 90 degrees for the left or right side behind the car when reversing out of a parking spot.

- For more details contact Hinchy's Garage at either their Knocklong or Ennis Road locations.