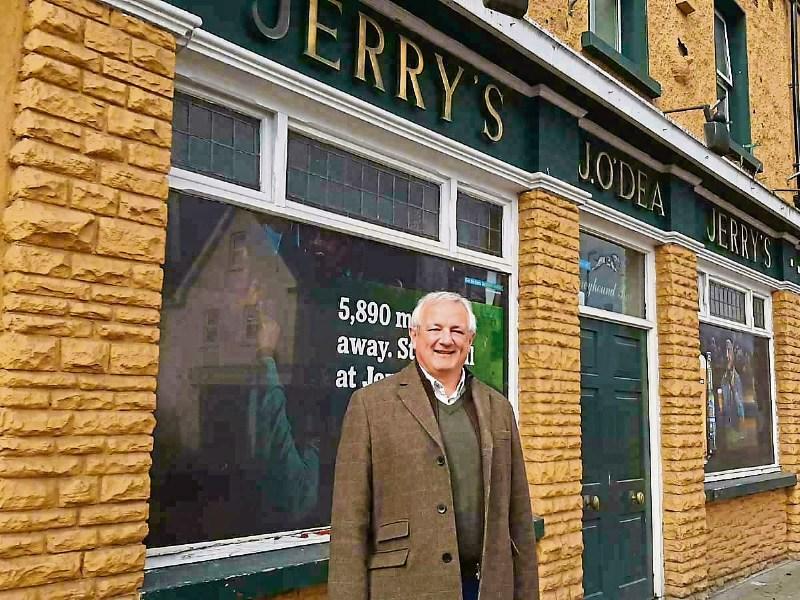 The late Jerry O'Dea pictured outside his popular bar on Mulgrave Street. He has been remembered as 'a proud Limerick city man'

IN THE words of An Taoiseach Micheál Martin “he cared deeply about his city and its people”, and, this Thursday, they will bid him a final farewell.

The people of Limerick woke up to the sad and shocking news last Saturday morning that the Fianna Fail councillor Jerry O’Dea had died suddenly overnight. He was 55.

The popular publican was due to be elected mayor of Limerick this Thursday. Instead, his funeral Mass will take place in St John's Cathedral, not far from his Mulgrave Street-based bar, Jerry’s, which has been in his family for three generations.

The funeral cortege will travel past the bar en route to his final resting place, Crecora Cemetery.

“Jerry was a proud Limerick city man and an active supporter of a wide array of city sports clubs, community groups and charities. Jerry worked tirelessly for those he represented and was always active on the ground in an understated and highly effective way,” said the Taoiseach Micheál Martin.

It is understood that Mr O'Dea, formerly of Ballyclough, suffered a medical episode after finishing work early on Saturday morning.

He was a councillor for Limerick City East in the Metropolitan District of Limerick and as part of the Fianna Fail-Fine Gael power sharing pact, Mr O’Dea was due to take the mayoral chain of office and become the mayor of the City and County of Limerick at the local authority’s annual meeting this Thursday. That meeting has now been postponed until Thursday, July 7.

“He was looking forward to it. There was a big celebration planned. Lots of his friends and supporters were looking forward to him being elected mayor,” said Mr O’Dea’s brother-in-law Cllr James Collins who is a former mayor of Limerick.

“He always had a smile on his face,” Cllr Collins continued. “He supported an awful lot of sports clubs. He had a very strong connection with Pike Rovers and with Geraldines through the pub and loads more sporting organisations. He was a big supporter of Treaty - he used to sponsor buses for them.”

Mr O’Dea, whose bar is located close to Markets Field stadium in Limerick, also served as the local representative of the Vintners Federation of Ireland (VFI) and was chairman of the local VFI.

“Jerry was known as the man who opened the pubs on Good Friday,” said Cllr Collins.

Mr O'Dea was elected mayor of Limerick City in 2015 and served as chairman of The Milk Market. He was a graduate of Shannon College of Hotel Management and worked in the hotel industry across Europe and in the US.

A book of condolence has been opened for the late councillor. Mayor Daniel Butler was the first person to sign the book in Merchant’s Quay on Monday.

Other books have been opened in Dooradoyle and in the Kilmallock, Rathkeale and Newcastle West area offices. An online book of condolence has also been opened by the local authority.

Mr O’Dea was first elected to the council in 2014.

“I am very proud of Limerick. Growing up and working in Limerick I came to realise that the best way to improve our city and county is to be involved,” he told the Limerick Leader in 2019.

Members of Limerick City and County Council will attend a special meeting, to formally pass a motion of sympathy, ahead of Mr O'Dea's funeral Mass.