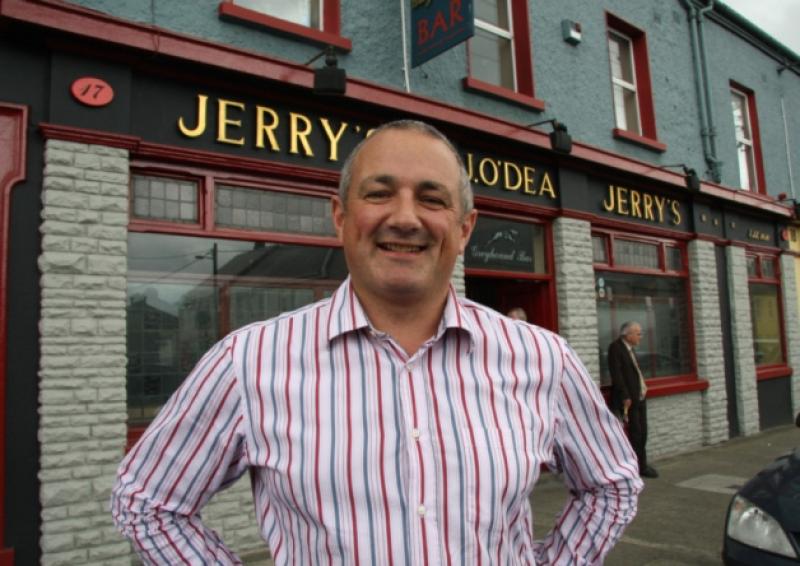 “AN OUTSTANDING public representative” is how popular Limerick city councillor and publican Jerry O’Dea has been remembered this Saturday.

The people of Limerick woke up to the sad and shocking news that the Fianna Fail councillor had died suddenly overnight.

Mr O’Dea, 55, was due to be elected Mayor of Limerick next week.

Tributes have poured in for the well-known businessman who ran the Mulgrave Street-based bar, Jerry’s, which has been in his family for three generations.

The Taoiseach said he was "deeply saddened" to learn of the death of "our party colleague and friend Cllr Jerry O'Dea".

"Jerry was a proud Limerick city man and an active supporter of a wide array of city sports clubs, community groups and charities. He was a very popular local public representative who cared deeply about his city and its people. Jerry worked tirelessly for those he represented and was always active on the ground in an understated and highly effective way," said Micheál Martin TD.

It is understood that Mr O'Dea suffered a medical episode after finishing work early on Saturday morning.

He was a councillor for Limerick City East in the Metropolitan District of Limerick and as part of the Fianna Fail-Fine Gael power sharing pact, Mr O’Dea was due to take the mayoral chain of office and become the Mayor of the City and County of Limerick at the local authority’s annual meeting next Thursday.

“He was looking forward to that. There was a big celebration planned. Lots of his friends and supporters were looking forward to him being elected mayor,” said Mr O’Dea’s brother-in-law Cllr James Collins who is a former Mayor of Limerick.

“He always had a smile on his face and was very cheerful and friendly,” Cllr Collins continued.

“My phone has been ringing all morning - it just shows how popular he was. He supported an awful lot of sports clubs. He had a very strong connection with Pike Rovers and with Geraldines through the pub and loads more sporting organisations. He was a big supporter of Treaty - he used to sponsor buses for them.”

It is with great sadness we have been informed of the death of Jerry o Dea. Jerry was a great sponsor of ours and promoter of League of Ireland and was a publican across from the Market's Field stadium. He was also a great friend of the @LFCBlueArmy. Ar dheis de go raibh a anam pic.twitter.com/qLb9VJ5p7O

Mr O’Dea, whose bar is located close to Markets Field stadium in Limerick, also served as the local representative of the Vintners Federation of Ireland (VFI) and was chairman of the local VFI.

“Jerry was known as the man who opened the pubs on Good Friday,” said Cllr Collins.

One of Mr Collins’ favourite memories of Mr O’Dea is when they enjoyed Limerick’s first All-Ireland final win since 1973, in Croke Park on August 19, 2018 with Mr O’Dea’s father John Joe and extended family.

The Mayor of the City and County of Limerick Cllr Daniel Butler expressed his shock and sadness at the news.

“I was shocked and saddened to hear this morning of the death of our council colleague Jerry O’Dea. It is very difficult to get your head around such tragic news. Our thoughts are with Jerry’s family and friends and his party colleagues at this terrible time. We are all in total shock," said Mayor Butler.

“Since being elected, Jerry prioritised working with communities right across Limerick to help them develop, as he believed that a stronger and better Limerick was built from the ground up. Sporting and local groups were central to this. They will all miss his important advice and guidance.

“On behalf of the people of Limerick, I would like to thank Jerry for all his service as a public representative, his constituents will feel his loss immensely and offer our sincerest condolences to his father, children and wider family circle and friends following his death.”

As a mark of respect, a special meeting of Limerick City and County Council will take place next week, while the Irish flag will be flown at half-mast at corporate buildings in Merchant’s Quay and Dooradoyle.

Minister of State at the Department of Further and Higher Education, Niall Collins, spoke of the sadness in Limerick following the news of Mr O’Dea’s death.

“It’s very sad news to wake up to this morning,” said Mr Collins.

“His family, friends and the local community are deeply saddened. Jerry was an outstanding public representative. He will be greatly missed. People are just shocked to lose such a young man,” he added.

Mr O’Dea was first elected to the council in 2014.

“I am very proud of Limerick. Growing up and working in Limerick I came to realise that the best way to improve our city and county is to be involved,” he told the Limerick Leader in 2019.

Deputy Willie O'Dea who, for decades, held his monthly Advice Clinic in Mr O'Dea's pub on Mulgrave Street and knew the publican and his family long before he got involved in politics said he "always found him to be friendly and courteous".

"He was a dedicated public representative and my thoughts and prayers are with his family and friends at this very sad time," he said.

Mr O'Dea was elected Mayor of Limerick City in 2015 and served as chairman of The Milk Market. He was a graduate of Shannon College of Hotel Management and worked in the hotel industry across Europe and in the US.

"My memories is of a man who only spoke this week to me of how helping local communities and sporting groups was the main reason for him being a councillor and how he was looking forward to the role of mayor to promote that. He was always a gentleman," said the Fianna Fail councillor.

Mr O’Dea is predeceased by his mother Margaret and survived by his father John Joe, his two children Catherine and JD and their mother Sinead, his brother Andrew, his two sisters Siobhan and Eileen, wider family and friends.