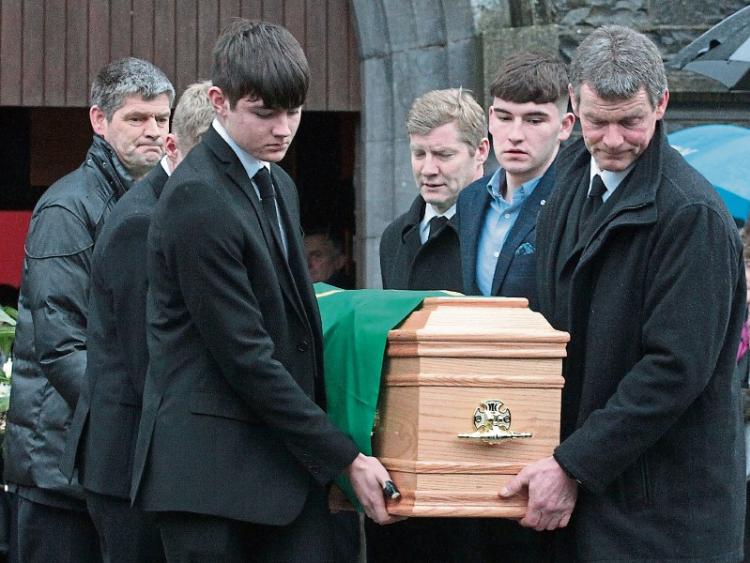 Sad farewell: The Ahane GAA flag was draped over Willie Keane’s coffin as he went to his eternal reward after a life well-lived - PICTURE: Dave Gaynor

AS THE decade comes to a close Ahane GAA said goodbye to an all-time great this Wednesday.

Huge crowds paid their respects to the late Willie Keane, of Gardenhill, Castleconnell at his removal on Tuesday and funeral Mass this Wednesday.

Willie, aged 88, passed away peacefully after a short illness on Sunday. His father, Jack, won an All-Ireland medal in 1918. One hundred years later when Tom and Dan Morrissey brought the Liam MacCarthy Cup back to Ahane GAA club Willie was there. Indeed, Willie was as popular as Tom and Dan!

“I remember the last time the Liam MacCarthy Cup came to Ahane in 1940. It is great to see it again,” said Willie on the day. His sons John, Mike and Pat got specially made T-shirts for All-Ireland final day for themselves and their dad. On the front was pictures of the 1918 and 2018 Limerick teams and on the back was “C’mon Ahane the spuds are boiling”.

Willie hurled with Limerick and Ahane, winning a county final in the 1950s. He passed on his love of hurling and football to his children and grandchildren.

Fr Tom Whelan, who said the funeral Mass, described Willie as an “all rounder.

“From hurling to cards to the choir to farming to the bog - whatever he turned his hand to he was a natural at. He was involved in everything in the community and was a great community man. He is part and parcel of the place, everybody knows him and he is held in very high esteem.

“Nobody would say a bad word about Willie Keane. He was just himself and everybody liked him. He always had a lovely glint in his eye. People are saddened because he was such a lovely person,” said Fr Whelan.

The priest spoke of the closeness of the Keane family - beloved husband of Patsy and dearest dad of Mary, Margaret, John, Peter, Mike and the late Áine.

“He was obviously a great family man because, my God, the family were always by his side when he was ill or in hospital. They never left his side,” said Fr Whelan.

He mentioned the glint in Wille’s eye and fellow co parish priest, Fr Wille Teehan, spoke of his “fantastic smile”.

“I’m only here for the last year and a half. Willie was so welcoming to me. He was such a friendly face and had a fantastic smile.

“He was steeped in the GAA, he and his wife had a huge commitment to the choir and he loved a game of cards. He was a very sociable man and had a great sense of humour.  He was one of nature’s gentleman, a gentle giant really,” said Fr Teehan.

Ahane GAA showed their respect by a huge guard of honour from Meehan’s funeral home to the church on Tuesday and on Wednesday from Chapel Hill to the cemetery. Willie never missed an Ahane GAA match or event. Only a few weeks ago he was at their OsKaR night.

The club issued a statement saying, “We are deeply saddened to hear of the passing of the president of our club, Willie Keane. Willie was a valued member of our club and he was held in high esteem by all in the club.

“Willie was the club’s chairperson and held this position during the centenary year of 1984. Willie previously held the role of the club’s county board delegate and performed the role to the highest standard.

“Willie played on the Ahane team of 1955 that won the county final. In 1956 Willie has a member of the Limerick team that played in the Munster final against Cork. He also played in the 1962 junior football final.

“Willie was a committee member all his life and was a trustee of the club. He received the hall of fame award in 2014 for all his work in the GAA in both Ahane and Limerick.

“Willie’s children and grandchildren have or are currently playing with various teams in the club and the whole family still holds very strong connections within the club.

“We would like to send our condolences to Willie’s wife Patsy and all his family.”