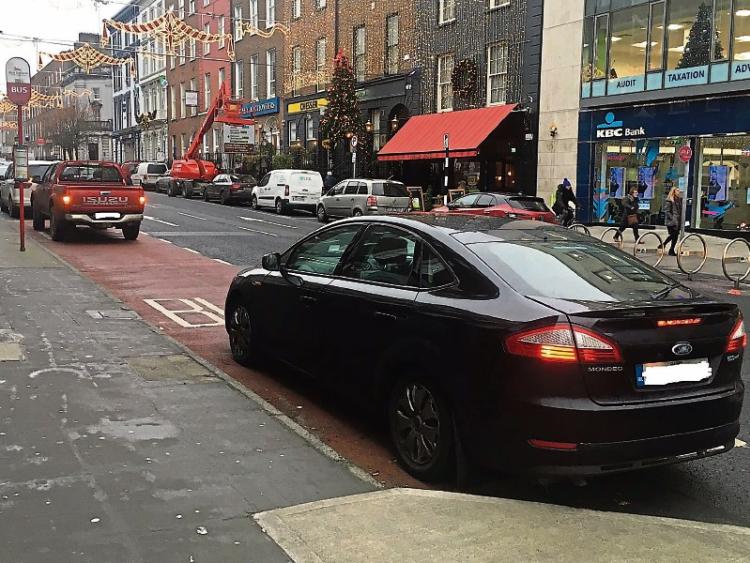 Parking in bus stops is a persistent problem in Limerick - Picture: Seamus Ryan/Twitter

A TOTAL of 500 tickets have been given out to drivers who parked in bus stops since January 2019, it has been revealed.

That is alongside a further 120 tickets that were given to motorists for parking in coach bays, bringing the total to 620.

The news was announced by Councilor Joe Leddin at a  meeting of the Travel and Transportation Strategic Policy Committee, which was held in the Council Chamber, Merchant’s Quay on Tuesday.

“The figures given on Tuesday are definitely reflective of the severity of the problem that we have of non-compliance when it comes to parking. If you walk down O’Connell Street, or Roche’s Street, or any of the main streets and you will see people parking in the bus stops, not for a minute or two but literally hours and going about their business, and that is just simply not acceptable,“ he added.

The news follows the announcement that over 30 extra Gardai will be brought into Limerick over the Christmas period. This will help alleviate traffic issues, particularly in the hours which are not covered by traffic wardens.

“I was delighted to confirm that there will be an additional 32 Gardai in Limerick, with a substantial proportion of them on duty over the Christmas period to help with the movement of traffic,” said Cllr Leddin.

Illegal parking in Limerick city has been an issue of debate for some time, with a number of Twitter accounts calling for drastic changes.

“Sometimes, what is happening, is Gardai are ticketing a car, which is an automatic scan of the registration. So the ordinary person won’t realise that there is a certain amount of action being taken. With a sticker people are going to see that action is being taken,” he added.

The stickers, as well as displaying obvious parking violations, are difficult to remove and will be a nuisance to rogue parkers, Cllr Leddin claimed.

A similar system, which uses stickers, is currently in place at the University of Limerick, among a number of other private parking areas across the country.