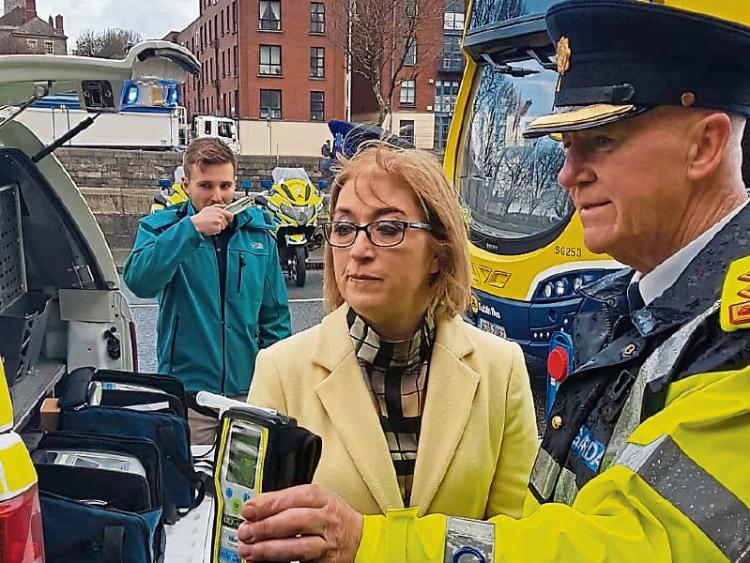 Moyagh Murdock of the RSA and Chief Superintendent Aidan Reid are appealing to motorists not to drink and drive this weekend | PICTURE: Twitter/@GardaTraffic

MOTORISTS are being warned that gardai will out in force across Limerick targeting drivers under the influence of drink and drugs over the St Patrick’s Weekend which is traditionally a high risk period for alcohol and drug driving related crashes.

New figures show there has been a 17% increase in the number of arrests for driving under the influence of alcohol and drugs in the first two months of 2019 compared to the same period last year.

A total of 1,429 drivers were arrested, nationwide between January 1 and February 28.

The Medical Bureau of Road Safety, which analyses the blood and urine specimens of drivers arrested on suspicion of drink-driving, has also reported an increase in the number of specimens being sent for analysis.

“Our job is to protect communities from drink or drug drivers. Their selfish actions put you and I at risk on the roads. Whilst the vast majority of drivers that we test are free from alcohol or drugs, we have detected more drivers this year that are not, which is why An Garda Síochána will have a visible enforcement presence across the country over the St Patrick’s bank holiday weekend. This will include a targeted focus on driving under the influence of an intoxicant, whether that is alcohol or drugs or a combination of both,” said Chief Superintendent Aidan Reid.

“Drivers are required to carry their driving licence on their person. If stopped and breathalysed and you don’t have your licence, you will be tested at the lower level. If you fail, you will be arrested and taken to a garda station for further testing. Having a valid driving licence to hand will avoid this situation,” he added.

Moyagh Murdock, CEO of the Road Safety Authority is appealing to drivers to take case this weekend. “f you are heading out this weekend please plan ahead. Make sure you know how you’re getting home, whether by taxi, with a designated driver or public transport. Also don’t walk home if you’re drunk. Almost half of pedestrians killed on our roads have consumed alcohol. I’m also reminding drivers and passengers to wear seatbelts and to understand that there is a close link between drinking alcohol and the non-wearing of seatbelts in fatality statistics,” she said.

To date in 2019, 34 people have been killed on Irish roads, including two in Limerick.