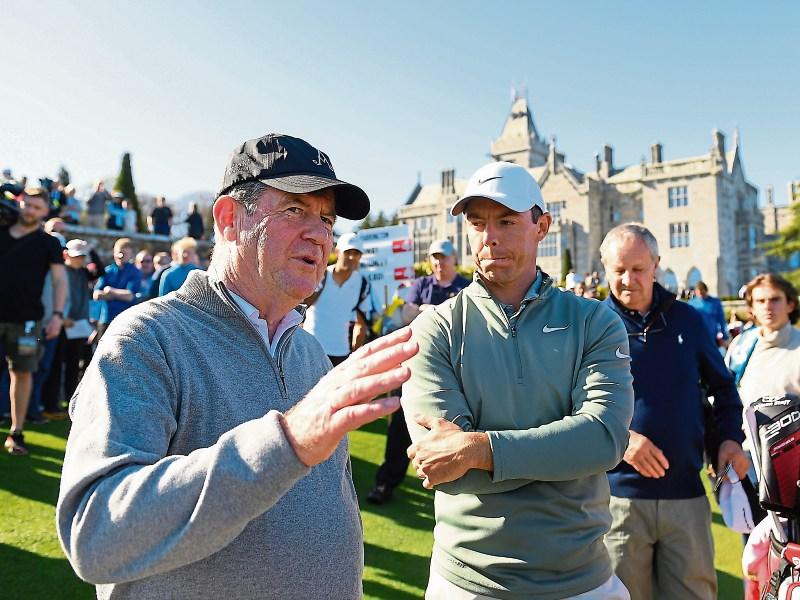 JP McManus with Rory McIlroy at Adare Manor for the launch of the Pro-Am Picture: Sportsfile

THE POSSIBILITY that the 2026 Ryder Cup will be hosted at Limerick's Adare Manor is gaining momentum after Ireland’s top golfers threw their weight behind the bid.

High-level talks are believed to have taken place with Government officials and members of the golfing community to push the 2026 bid.

And Paul McGinley, former Ryder Cup winning captain and member of the board of the European Tour committee, said that Adare Manor has a “strong” chance of securing the major international golf event.

Rory McIlroy, Padraig Harrington and Shane Lowry also voiced their considerable support for the bid while they were in Adare last Friday for the launch of the JP McManus Pro-Am 2020, and the official opening of the new course.

Adare Manor owner JP McManus confirmed his Ryder Cup bid, after he first revealed his hopes a year ago.

The JP McManus Pro-Am will take place in 2020, and it is also expected that the Irish Open will return to Adare Manor in either 2021 or 2022.

By then, Adare Manor will already know its fate in the race for the tournament.

Rory McIlroy backed the bid saying: “I have played and competed at much worse venues in the Ryder Cup. I would be very confident that this would be very successful.”

And Paul McGinley added that he “would be 100 percent behind this as a venue” to stage the Ryder Cup.

Ireland hosted the 2006 Ryder Cup at the K Club, an event that was estimated to have been worth €143m to the Irish economy.

Dr James Ring, CEO of Limerick Chamber, said that the benefits would extend far beyond the event itself.

“It symbolises where Limerick is going. If you look back 10 years ago, we wouldn’t ever even consider something like this. Not only are we considering it, but we would probably be very hopeful of getting it,” he said.

The immediate financial boost of a Ryder Cup in Limerick would be fantastic, but that is just a “snapshot” of the overall benefit the event would offer, added Dr Ring.

Fine Gael Senator Kieran O’Donnell has said that the prospect of the Ryder Cup should be a target for the completion of the M20 Limerick to Cork motorway.

“I would hope this is a three year process [to build the motorway]. Once it’s gone through An Bord Pleanala, we’d be looking at the appointment of contractors to build the route. JP McManus and Adare Manor are looking to bring the Ryder Cup to Adare in 2026, and this is very much the target we should be aiming for.

“We need to be setting defined targets in terms of time, and 2026 is the next Ryder Cup. I feel this is one of many targets, but it’s one that people will understand,” he added.