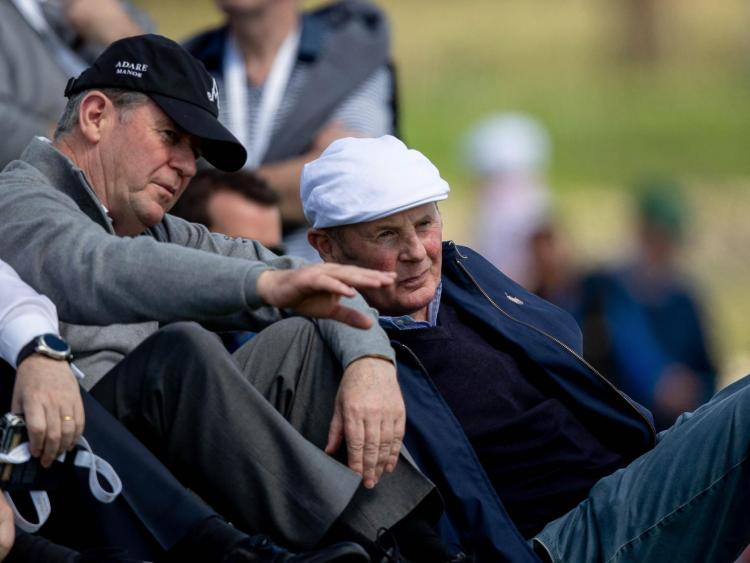 FOUR of Ireland's top golfers played in front of over 4,000 patrons this Friday at Adare Manor in Limerick to both launch the new golf course and the hosting of the JP McManus Pro Am in 2020.

Owner of the Adare Manor, JP McManus, described the day as "pleasing" when asked what he thought of the drawn four ball match and the weather, which was cloudless, windless and topping 19 degrees at times.

Rory McIlroy and Paul McGinley tied with Padraig Harrington and Shane Lowry over 18 magnificent holes at the new look Adare Manor course. Speaking after the players had received a share of €500,000 (donated by Mr McManus) for their selected charities, JP said: "It was a great result. Nobody was disappointed."

The new look Adare Golf Club, a must see for all golfers, was at its immaculate best. The course, built on over 250,000 tonnes of imported sand, was in pristine condition for the four leading golfers to put on an exhibition of golf.

JP McManus, with the help of world famous course designer Tom Fazio who designed the course, admitted that the hard work was done by the greenkeepers and ground staff at the Manor.

"I don't know if it was a vision or that a lot of things happened by accident, but it just worked out in the end," he said.

"They (the greenkeeping staff) put a lot of hard work into that in fairness to them and they have taken ownership of the course and that is what we need. I think we are committed to making this place as good as it can be, but also this team of fine men and women are the same."

JP McManus was also keen to chat about his other love, the Limerick hurlers. The long time supporter of Limerick GAA was smiling from ear to ear when asked if the real vision was to have Limerick hurlers win the All Ireland this season.

"It would be great to win the first game over Tipperary and go from there. It was great to get into 1A. They are a great bunch of lads and they give it their all. There is great spirit there. With that you never know what could develop out of that. It is a tough championship trying to win an All Ireland, but lets see if we can beat Tipperary in the first game and go from there," said the Martinstown man.

Asked for a one word answer to sum up several years of work, a perfect day for golf and hosting four of the best golfers in the World, the ever thoughtful Mr McManus summed it as "pleasing".

Pleasing it was indeed for all who attended, but particularly for those charities who will benefit from a huge €125,000 each.