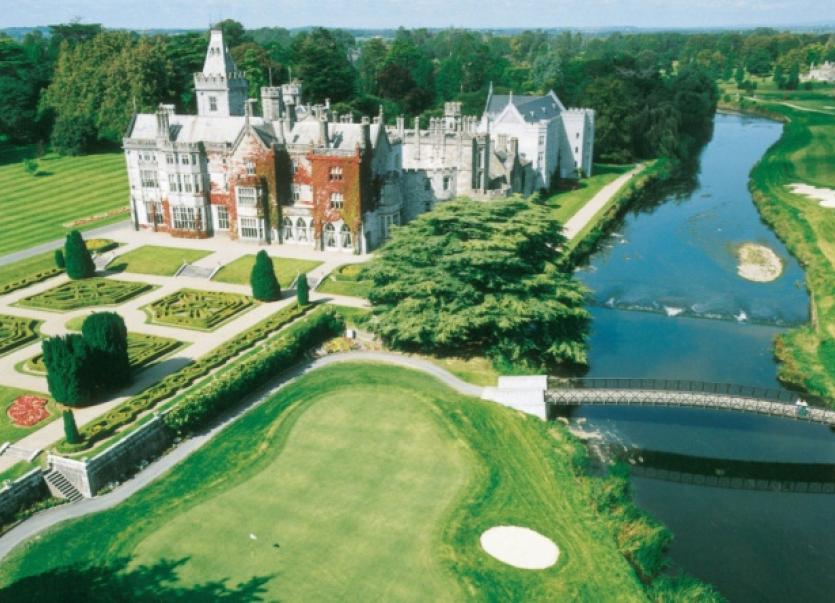 ADARE Manor could become the “Augusta of Europe” under new plans for the resort envisioned by owner JP McManus.

ADARE Manor could become the “Augusta of Europe” under new plans for the resort envisioned by owner JP McManus.

The Limerick Leader understands that the Martinstown Stud owner, who bought the resort last year for a figure in the region of €30m, is planning to invest at least the same amount again in a major redevelopment of the hotel and golf course.

While very little has been said officially, it is believed that major development work will get under way at the beginning of 2016 – causing the golf course to close for a period of approximately seven months, and the hotel for even longer, subject to planning. The clubhouse on the renowned parkland course is to get a major revamp, with a number of holes to be completely redesigned also on the course, which hosted the Irish Open in 2007 and 2008.

A spokesperson declined to comment when asked about the plans for the resort this Wednesday.

The Limerick Leader has however learned that high ranking officials in the golf club were informed this week that the course would likely close for at least seven months next year, with members to get a break on fees while the work is being carried out.

Members are due to be informed by letter about the development plans in the coming days.

It is understood that the intention is to transform the course, with a view to returning the Irish Open to Adare, plus JP’s Pro Am and, looking ahead, making an attempt to secure the Ryder Cup in 2026.

The hotel, it is also understood, will close for a longer period, up to 18 months, with plans in place to build a new wing and conference centre. The figure being mentioned is that of €30m, in an effort to make the Adare facility “the best golf resort in Europe”, according to a source.

JP is understood to have drafted in Colm Hannon to oversee the transformation. Mr Hannon was general manager in Sandy Lane in Barbados for eight years and is currently CEO in Luttrellstown Castle, where he has been based for ten years.

Planning applications have not been lodged for the major development work, but the process is expected to take place soon.

A leading member of the club said that while members had not been told officially, officers had met with management and had been told that all facilities, including the golf course and the hotel, will close for major renovation work early in 2016.

“It seems that the groundswell of opinion at this stage is in favour of it. There will be no sub (fees) for the year and other clubs in the area have indicated that they will do deals for playing for the year,” said the source.

“It will totally improve all the facilities, including the golf course. We have been assured that membership will be fine and that we will have a world class facility when everything is completed.

“Everything is closing at the end of January and work is due to begin straight away,” they added.

Ivan Morris, golf columnist with the Limerick Leader and author, said that JP is, he believes, seeking “to turn Adare into the Augusta of Europe”.

“I think, myself, that JP’s plans are to have the Ryder Cup in Adare in 2026. And if that comes to pass it will obviously be a huge boon to the region. That is long term. I don’t think short term it is going to be of much benefit to the game of golf in the region,” he explained.

“I know that he has been quoted as saying that he wants to turn Adare into the Augusta of Europe. But people must realise that Augusta is a very, very exclusive place - it is an impossible place for the normal person to get into,” he added.

JP told Limerick Leader editor Alan English in an interview in November of last year that he hoped to host the Pro-Am that has raised more than €100 million for good causes in the Mid-West, “in 2016 or 2017”.

“As much as I’d like to have it a year earlier, I think it’s more likely to be in 2017 because with the extra planning time it would be a better event,” he explained.