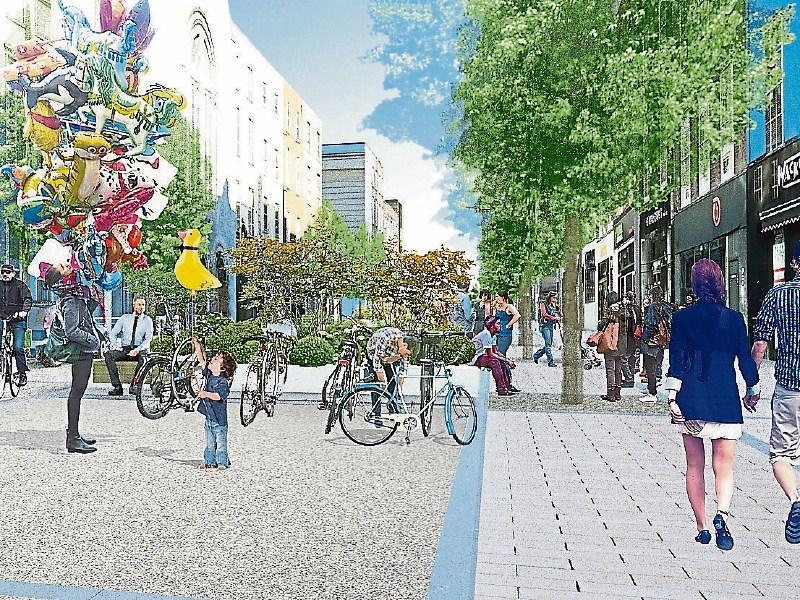 A HIGH-PROFILE group of Limerick business people fear the O’Connell Street revitalisation scheme could bring about a “ghost city” and the plans are not “sufficiently ambitious.”

In a wide ranging submission to Limerick City and County Council, the Limerick Chamber’s city centre group has also said it does not believe the €9.1m allocated is enough funding needed to carry out the proposed changes to the scheme, unveiled last summer.

The group – which includes Gordon Kearney, Rooney’s Auctioneers, Helen O’Donnell, Hunt Museum, John Moran and Michael Tiernan in its number – has issued a series of recommendations to the local authority.

Chief among these is the erection of an “iconic and unique” canopy roof over the retail and hospitality section of Limerick’s main thoroughfare, from the junction of William Street to the Roches Street crossing.

They want this to be a “focal feature” of Limerick’s new city centre, and are calling for it to be made a “priority component”.

“All upgrades to features and aspects need to be ambitious and visionary, rather than formulaic in design,” the submission reads.

In the submission – delivered to council manager Conn Murray this Monday – the group added additional funding will need to be secured by council to complete the redevelopment to a standard which represents “real measurable change”.

The group have also warned that people may not occupy the new plazas.

To tackle this, an “animated, interactive public realm” should be put in place, having both day and night attractions to incentivise increased footfall, the Chamber group says.

The whole plan, they say, must be linked to the Living City Initiative to ensure the Georgian Quarter in the city centre is brought back into greater use.

In terms of big name shops, the group has asked whether there is potential in Ireland to apply grading guidelines for listed buildings, allowing changes to inside units. A call was also repeated for a ‘garda cabin’.

The revitalisation plans were criticised when presented by council, with many taking issue with the fact traffic will be allowed to remain in the initial design.

Councillors will in the coming months decide whether to accept, reject or modify the design.