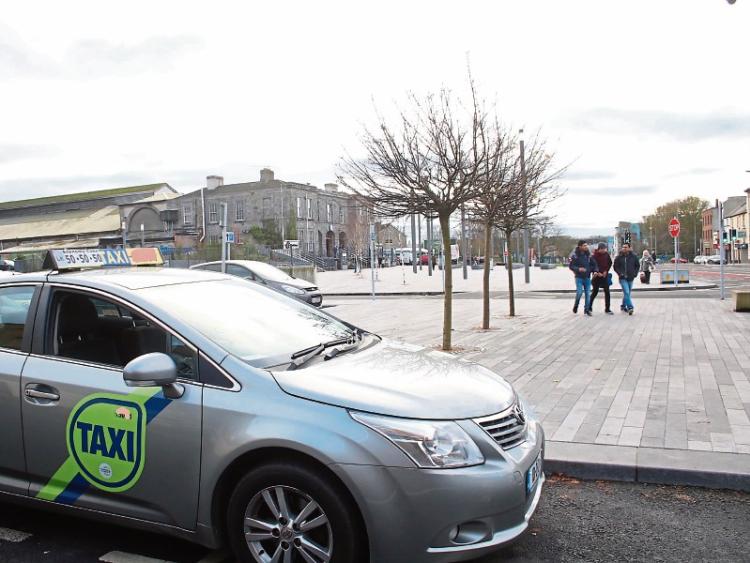 Taxi driver are concerned that there are signs at the station to direct people to taxis when they arrive in the city Picture: Michael Cowhey

TAXI drivers have described the relocation of the taxi rank outside Colbert Station to Parnell Place in Limerick city as “disastrous.”

A number of drivers have said the move, which is part of the major redevelopment work taking place in the area, is having a direct impact on the elderly and is also affecting their business.

“It’s very bad for tourists, it looks like there are no taxis,” said Tony Mc Namara, Mid-West representative of the Irish Taxi Drivers Federation.

Mr McNamara says the fact that the taxis are out of view is resulting in complaints from customers.

“People are coming out of the station and there is no sign to say where we are situated, so they are walking to Cecil Street for a Taxi,” he said.

“Who ever designed it forgot about taxis and they’re needed, especially at the main station in Limerick,” he added.

According Mr McNamara, an elderly person coming off a train recently couldn't find a taxi to attend their hospital appointment.

Jude Williams of Xpert Taxis said the issue can be resolved by turning the bus lane outside the station back into a rank for three or four cabs and according to Taxi driver Dominic Fitzgerald this was the council’s original plan.

“There was to be four taxis at the front of Colbert Station and there would be a holding bay on Parnell Place,they came along and changed their mind last Christmas week,” he said.

“When the weather is fine, the street drinkers are on the Plaza and in the night you have the skateboarders,” said one driver.

A spokesperson for Limerick City and County Council said: “As part of a major redevelopment of the area around Colbert Station and Parnell Street, the taxi rank in front of Colbert Station was decommissioned and relocated to Parnell Place to the side of Colbert Station, less than 100 meters from its previous location which was already used by taxi drivers.

"Limerick City and County Council carried out non-statutory public consultation including a public display in the Railway Hotel on March 26 2015 where taxi drivers and their representatives that presented at the meeting received information about the plans for the taxi rank.”