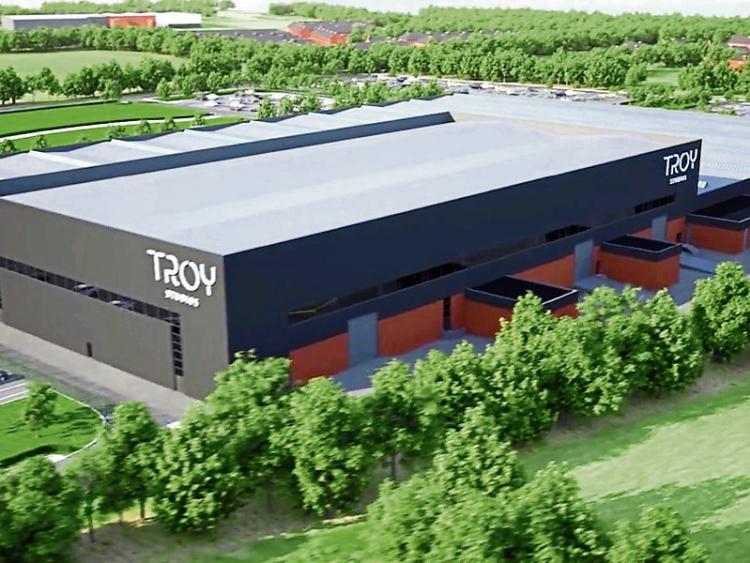 A computer generated, overhead view of Troy Studios, work on which is expected to finish early next month

EXTENSIVE construction and refurbishment work on Troy Studios in Limerick is expected to be finished in “early to mid September”.

Mike Cantwell of Innovate Limerick, the council’s investment arm that was crucial to finalising the Troy deal for the former Dell building in Castletroy, also outlined that the studio has had “a steady stream of interest internationally in what is happening there, it is a world class facility”.

”The construction is at an advanced stage and is due for completion in early to mid September,” he said.

Troy has linked up with Pinewood On Location to handle its international bookings and has “340,000 sq. feet of high-specification sound studio and support facilities for film and television productions” on offer. It has been visited by big name producers since the deal was struck with the local authority last summer.

The council, through LCO Enterprise Development Limited, bought and is refurbishing the building for around €8m, with Troy taking a 20 year lease.

Mr Cantwell said: “It is a world class facility, they have had people from around the world over viewing it and it is the one thing that everybody says back to them, is that there is nothing like this. Because everything is under the one roof. Studios in general have the soundstage in one building and production in another – out in Troy it is all under one roof.

Of potential production bookings, he said: “We are not aware that any particular production has signed up yet, (but) I think that is only a matter of a short time.”

The council announced last week that it was purchasing the former biblical centre on Dominic Street for €2.25m to develop a production and digital skills academy to feed into the opportunities created by Troy – which council CEO Conn Murray has said could result in a €70m spin-off for the local economy, creating upwards of 750 jobs.

The intention, Mr Cantwell said, was to host an “open day towards the end of September” to welcome interested parties to the expansive Troy studio facility.

“That would be where we invite everybody from the region and from beyond that has an interest in working in the area to come and meet Screen Ireland, the Film Board and all the active parties in training and let people come and tell us what their skills are,” he said.

“If they are interested in working in that area, we will then be able to provide – working with the education and training board –  to put together the training courses that are required to get those people ready to be able to go in and work there,” he added.

Troy, run by principals Siún Ní Raghallaigh, Ossie Kilkenny and John Kelleher, has so far maintained a discreet media profile, but Michelle Brassil said in a council issued statement that “in providing world class film studio infrastructure, Troy Studios will be the enabler for incoming productions that will seek to employ local production crews, trained to a very high standard”.

The studio is likely to employ 6-10 full time core staff on site, with up to 500 staff employed during production, which typically lasts 3-9 months depending on the project.