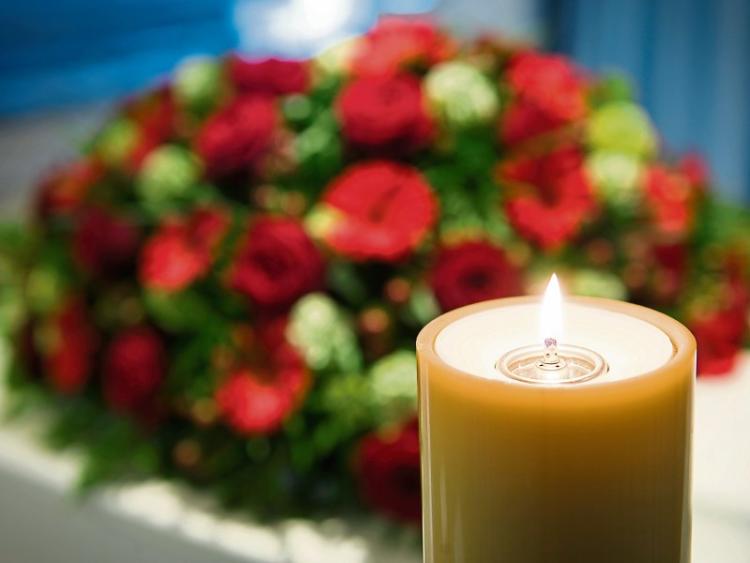 The death has occurred of Loraine Cliffe

On January 11, 2021, peacefully, in the tender and loving care of her colleagues at University Hospital Limerick, Loraine Cliffe. Deeply regretted by her heartbroken husband Michael Walsh, adored mum of Oisín and Ciarán, loving daughter of Pat and Kay Cliffe, brothers Dermot and Alan and their wives Catherine and Nicola, sister Caroline and her husband Maidhc de Paor. Sadly missed by her father-in-law and mother-in-law Nicholas and Marian Walsh, brother-in-law Eoghan Walsh and his wife Clodagh, sister-in-law Nicola Walsh, uncles, aunts, nephews, nieces, relatives, neighbours and a large circle of friends.

Loraine’s funeral cortege will go via Ballinameela National School at 11.15am, on Saturday morning, January 16, 2021, to St. James’ Church, Ballinameela. People wishing to acknowledge the funeral cortege, please do so in line with social distancing.

Due to government and HSE advice and guidelines regarding public gatherings and to protect our most vulnerable family members and our friends, a private family funeral will take place.

The death has occurred of Seán Costelloe

Of Woodvale, Foynes, Dublin and Kerry

Passed away peacefully at home surrounded by his loving family

Predeceased by his loving wife Rita

Sadly missed by his loving sons James and Seán Óg and his loyal friend Sam,neighbours and friends

Seán's funeral cortege will leave his home on Thursday, January 14, for funeral mass at 12noon in St Senan's Church Foynes followed by burial in The Holy Cross cemetery in Athea

In line with government  and HSE guidelines a private family requiem Mass will take place.

The death has occurred of Bernadette Dunne (née Doohan)

Predeceased by her brother Patrick (Michigan), sister May (McGovern, Loughrea).

Requiem Mass for family will take place in Monaleen Church on Friday, January 15 at 11.00am with burial afterwards in Castlemungret Cemetery.

In the interests of public health, attendance at Bernadette’s requiem Mass will be restricted to accord with government guidelines and in line with social distancing protocols. Mass cards and messages of sympathy can be sent to Thompson’s, Thomas Street, Limerick.

The death has occurred of Doreen Holmes (née Reidy)

In line with HSE guidelines and government advice, Doreen's funeral will be private. Removal from Sextons funeral home, Broadford on Saturday at 11.45am to St. Mary's Church, Feohanagh for Requiem Mass at 12.30pm. Burial afterwards in Aglish Cemetery.

Family flowers only please. Donations in lieu, if desired, to Milford Care Centre.

The funeral cortege will travel to the church via Rathpalatine for those who wish to line the route. Messages of condolence and cards can be posted to Sextons Funeral Directors.

The death has occurred of Teresa McCarthy (née Madden)

May Teresa rest in peace

Funeral Mass on Friday at 2pm in St Nessan’s Church, Raheen, Limerick which can be viewed on www.churchservices.tv/raheen/ and burial immediately afterwards in Crecora Cemetery. In line with Government and HSE advice regarding public gatherings, the funeral service and burial will be limited to 10 people. Teresa’s family would ask that over the coming days, everyone who knew her would take some time to light a candle or say a prayer in Teresa’s memory.

Those who would have liked to attend Teresa’s funeral, but due to current Covid restrictions please feel free to leave your personal message in the condolences section at the bottom of this page.

The death has occurred of Joe McMahon (Snr)

Died on January 13, 2021, peacefully in the exceptional care of the staff in Beechwood House Nursing Home. Husband of the late Kitty, and grandfather of the late Kieran. Deeply regretted by his daughters Cathy, Patricia and Rose, sons Joe, Kieran, Derry and Aidan, brothers Paddy, Mick, and Denis, grandchildren, great-grandchildren, son-in-law, daughters-in-law, nephews, nieces, relatives and friends.

In accordance with government guidelines a private family funeral Mass will take in Newcastle West Church this Friday, January 15, at 11:30am. Burial afterwards in Calvary Cemetery. Mass cards or letters of sympathy can be sent to Riedys Undertakers.

The death has occurred of James (Jim) Normoyle

Of Kanturk, Cork and Glin

On January 12, 2021, peacefully, at Marymount Hospital and Hospice.

James, son of the late James and Mary Bridget.

Sadly missed by his loving partner Mary O'Sullivan, his family, relatives, neighbours and his large circle of friends.

A private family funeral will take place in accordance with current guidelines. We thank you for your co-operation and understanding at this difficult time. Please leave your personal message for James's family through www.jerhoconnorfuneralhomes.ie.

A remembrance Mass, will be held in Glin at a later date.

The death has occurred of Seamus O'Rourke

The death has occurred of Seamus O'Rourke of Clounreask, Askeaton at Beechwood Nursing Home, Newcastle West on January 13, 2021, husband of the late Breda. Formerly of Wyeth Nutritional Askeaton.

The death has occurred of Sarah (Sadie) Stanley (née Raethorne)

Requiem Mass for family will be held in St Michael’s Church, Denmark Street this Friday 12 noon followed by burial in Castlemungret Cemetery.

Family flowers only, donations, if desired, to St. Camillus Hospital.

In the interests of public health, attendance at Sarah’s requiem Mass will be restricted to accord with government guidelines and in line with social distancing protocols. Mass cards and messages of sympathy can be sent to Thompson’s, Thomas Street.

The death has occurred of Richard (Dick) Stapleton

Richard will repose outside the front door of his residence, Port Road, Garryspillane on Thursday morning, January 14, from 11.00am to 12.30pm for drive-by expressions of sympathy only. Please remain in your car at all times. Richard's funeral cortége will leave his residence at 12.40pm for 1pm Mass in St. Patrick's Church, Glenbrohane. Burial afterwards in Ballylanders Cemetery. Mass will be live streamed on Ryan's Undertakers Ballylanders Facebook page.

Both the funeral Mass and burial are strictly private and for family only. Messages of sympathy may be expressed through condolence section below or by post to Ryan's Funeral Home Ballylanders.