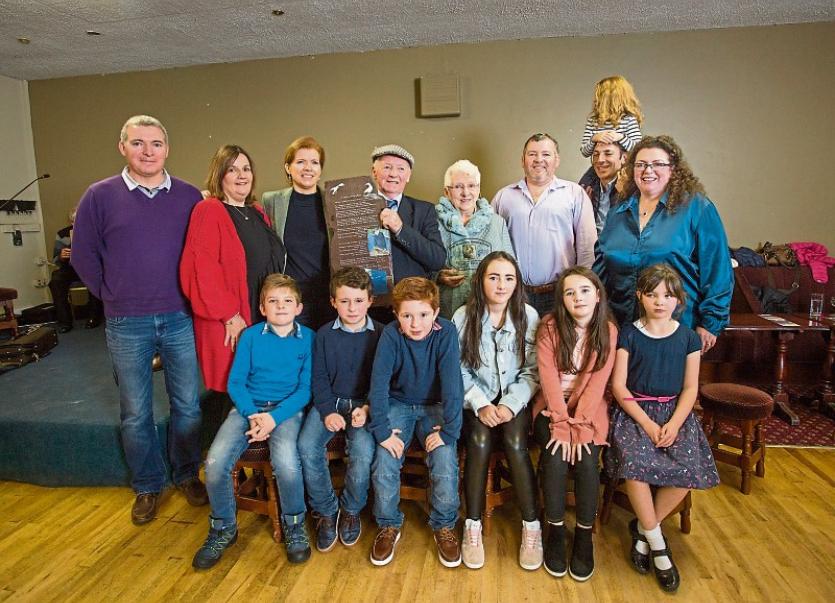 Tomás McKenna is pictured with his family at a tribute afternoon in his honour as part of the Garry McMahon Singing Weekend at Fr. Casey's GAA Clubhouse, Abbeyfeale

TOMÁS McKenna is “the strong arm on the tiller of our little group”, Owen McMahon said in tribute to the man who has been chairman of the West Limerick Singing Club since its foundation in 2002.

Tomás was the man selected by the club for singular honour this year at their Garry McMahon Singing Weekend in Abbeyfeale and there were no seats to spare at the tribute event which took place at Fr Casey’s GAA club on Sunday afternoon.

Continuing his homage to Kerry-born Tomás, Owen  said: “He is a man of integrity, a man of the quiet word and a touch of the elbow. We couldn’t function without him.”

But he revealed that the  tribute was a “big deal” for him personally.  Medals and trophies no longer hold the power they had when “we were young and silly”, he said.

“There is one thing that is important to me and that is the amount of friends and the good-will of the people who have come long journeys to be here. That is worth something to me,” he said with emotion.

Tomás’s wife of 50 years, Eileen, herself a singer, was there to celebrate the honour as were their children and grandchildren.

So too were Tomás’s “comrades in song”, Christy Cronin and Patrick O’Sullivan,  who travel the roads together as the trio with the caps  and who are known in singing circles as The Three Euros. They delighted the crowd with their rendition of “Between the mountain and the sea”.

One of the most tender moments of the afternoon however  was when Tomás sang as Gaeilge with his daughter Nóigín who had travelled from her home in Switzerland for the event.

But the tribute to Tomás was just one in a packed programme of events which kicked off on Friday night when the weekend was formally launched by footballing legend and broadcaster Tomás O’Sé.

“Friday night was outstanding,” Joan  McMahon said. Her late husband Garry, who died in 2008, would have been pleased, she added. “I do find it hard, I find it lonely. But I appreciate more than anything what the Singing Club is doing because Garry got so much enjoyment from it. It is a mixture of loneliness and happiness.”

Garry’s brother Owen, who is PRO for the club said the singing over the weekend was great. “We have had great quality singing,” he said while club secretary Chris O’Shea beamed with pleasure at the success of the weekend.

“This is our ninth and it has been amazing,” she said. “We had new people here again, people who had never been here before but they are now booked in again for next year. We couldn’t believe it.”

“People came from Mullingar and Roscommon,” she continued. “There were people from Holland, from London, from Derry, from all over. And the feedback from people is fantastic.”

Pat O’Sullivan, Scartaglen emerged as this year’s winner of the newly composed ballad. But his Sliabh Luachra Long Ago was just one of hundreds of songs sung at sessions in Abbeyfeale over a weekend which ended late on Sunday night.

“Up the ballad”, as Owen McMahon said.