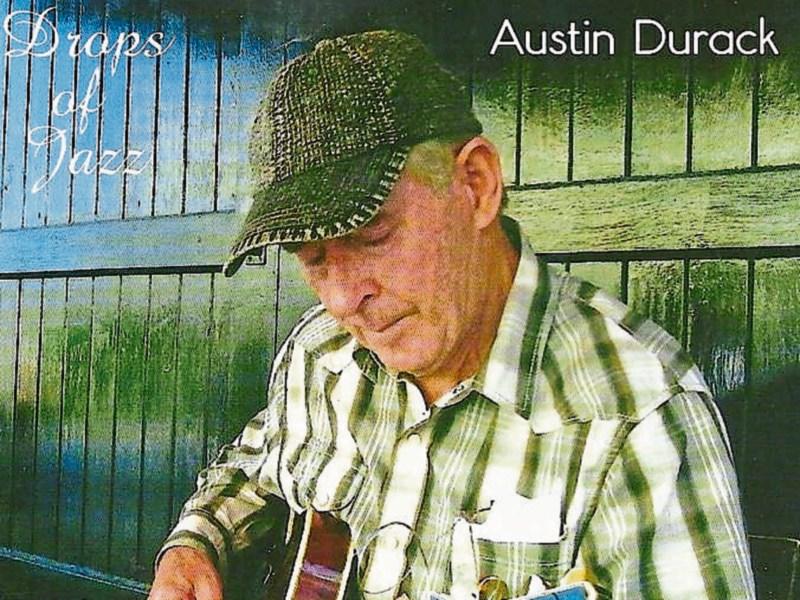 The cover of Austin Durack's 2011 album Drops of Jazz

He left us all too soon after contributing hugely to Limerick life as a guitar teacher, an entertainer and a friend to many, during his short lifetime” Austin says, adding: “Tadhg was but one of three great Limerick musical friends who left us that year. Mick Gleeson from Emmet Place was more from the musical-theatre genre and produced Tops of The Town and Siamsa shows in the city.

He was of invaluable help to me with my Caherdavin productions. Liam Foley from the Ballysimon area was a fine harmonica player and a stalwart of our Regal sessions. I remember these three great friends often.”

The Broonzy Boys consisted of Mike Ryan (harmonica) “who was one of Limerick’s best musicians” Austin says, together with Austin’s son Aidan (2nd guitar/ /vocals). They had a lively acoustic blues residency in Ma Hogan’s, Catherine Street, which used to be frequented mainly by college students.

Austin played his first instrumental guitar gig in The Castletroy Park Hotel in 1994. I believe this is where Austin really shines. Some of his originals of that genre appeared on his 1996 album, What’s Another Continent. He recorded this in Denis Allen’s and Xeric studio with Limerick musicians Bryan Meehan, Dave O Connell, Nuala Mulcahy (percussion), Mick Hinchy (bass), Frank Dolan (drums), Brian O Connor (lead guitar, harmony), Dara McNamara (slide), Noel Casey (bass), harpist Muirne Hurley (who went on to become a Rose of Tralee) and others.

Some tracks were recorded in Ennis with people Austin contacted through Clare FM mainly, including Martin Hayes (fiddle), Declan Masterson of Moving Hearts fame (keyboards) and others. In later years Austin would record his own music in his own studio, The A Fountain.

Thanks to Maurice Dickson, Austin played a one-off gig in The Belfast Folk Club in the mid-1990s with Mike Hinchy (from a great Garryowen musical family) on double bass. Austin had toured N. Ireland a couple of times solo, ten years earlier. “Somehow folk musicians never feared the troubles” Austin says. Considering what happened to The Miami Showband he dodged a bullet there!

Austin recorded some musicians from the Limerick trad. scene like Batt O’Conner, Gerry McNamara and Tony O’Connell for the trad programmes he used to present on summer evenings on Clare FM. “The Limerick trad. community was always kind to me and the musicians would always call on me for a song at sessions in Nancy Blakes, Dolans etc. even though my music was of a different genre” Austin recalls. The great piper and friend of Austin, Mickey Dunne, often recorded with Austin while his multi-talented daughters, Niamh and Bríd also added their magic to some of his recordings.

In 1999 Austin enrolled for a MA in Community Music at UL under the great Michéal O Súilleabháin. Austin became friends with and would write music for many musicians from different genres that were in his MA class. These included Paul Roe, principal clarinetist with the National Symphony Orchestra. Austin recorded two of his new pieces with him for the forthcoming album Dreams and Soft Guitars at his home studio. One of these, ‘Soulsearching’ would later feature on The Blue of the Night on Lyric FM. Austin graduated in 2000 and proceeded to work for the next ten years in many schools (mainly in disadvantaged areas), hospitals etc. with people with disabilities.

“My role was not of a performer but a facilitator. It was a magical process. During the whole decade I would facilitate the composition of many songs by various classes in both primary and secondary schools, including a number of school anthems and ‘homework blues’ songs” Austin explains. He recorded all of them!

Limerick City Arts Officer, Sheila Deegan, once commissioned compositions by pupils from three city schools, Corpus Christi, Moyross, Gaélscoil Sáirséal and St. Kierans, Roxboro to be workshopped in The Granary and recorded for the CD, Pushing Towards The Future, which would eventually be launched in City Hall.

From 1981 to 1991 Austin taught Spanish through music in Scoil Ide, Corbally, likewise for a couple of years in Kildimo and German in St. Senan’s, Foynes. In 2005, with Scoil Ide he won The European Language Label, a prize given for innovative ways of teaching a modern language. It was given to him for teaching through original song. The award was given by Leargas and presented to Austin by Minister Mary Hanafin at the Law Society, Dublin.

The first one, A Guitar Journey (recorded in Brian O Reilly’s studio in Fermoy, Co Cork in 2007) was a breakthrough album with a lot of airplay on late night radio stations – Lyric, Radio 1, Radio Na Gaéltachta etc. Gay Byrne featured the duet Austin did with Mike Hinchy’s brother Ken (saxophone) of Fats Waller’s ‘Ain’t Misbehavin’, on his Sunday Jazz programme.

It received a very good review in Acoustic, a highly respected UK magazine (available in Easons). Gay Byrne played tracks from at least three of Austin’s albums during those years. Eamonn Lenihan and Carl Corcoran were also great supporters on Lyric (The Blue of the Night) plus John Creedon and Alf McCarthy (Late Date) on Radio 1.

Austin started performing during that period with three lunchtime gigs at UL, also at jazz festivals including Doonbeg and Ballydehob some of which he did with his favourite Limerick jazz vocalist and friend, Judy O’Conner.

“She made a couple of wonderful contributions to my 2011 album Drops of Jazz” Austin says. This was reviewed very favourably by Gráinne Farren in The Sunday Independent (Arts Review section). Conner O’Brien (of Roper) played double bass on that album as did Joe Mulcahy electric bass.

Around that time Austin had a residency in Milano’s Restaurant, Limerick, where he played with a different guest each night. These included Joe Mul (bass), Neil Linehan (guitar), Dave O’Connell (violin) and percussionist Bart Kiely. He continued playing right up to the first lockdown in places like Marie’s Café in The Milk Market, The Absolute Hotel (Limerick), Matt The Threshers (Birdhill) and finally a St. Valentine’s Day (2020) gig in the Kilmurray Lodge (Castletroy).

About seven or eight years ago Austin started playing guitar in a Kris Kristofferson tribute band fronted by Pat Mulcahy, from his first band, The Reno. They played in some lovely theatres like Friars Gate, Kilmallock and The Village Arts Theatre, Kilworth, Co Cork.

He has also been working with his brother Mike on arrangements of his poems with Austin’s music. In 2013 they released an album called The Secret Chord and another two years later called Going Gone. Tracks from these featured on radio also with plays on The Blue of the Night and Lorcan Murray’s Classic Drive plus a play on Gay Byrne’s Sunday Jazz programme, all on Lyric FM.

They performed at many poetry readings in Limerick venues like The White House, The Locke, The Lime Tree, The Belltable and further afield. Many of their Limerick appearances were run by Dominick Taylor, Director of Limerick Writers’ Centre. Dominic would occasionally call on Austin to play solo, for other events.

“The most memorable of these was at the Pavillion, UL, Limerick in August 2013 where John and Liam Liddy with Spanish poet Beatriz Villacañas read their poems at the Limerick Gathering Tailtean Nua Festival” Austin recalls.

Three year ago Austin started a Tuesday singing session with the old folks in Milford Nursing Home, Castletroy. “It was very rewarding work in more ways than one as it was a chance to get my vocal chords going once again” Austin says. Early last year Austin started writing songs relating to the new Covid 19 reality. These can be heard on his album New Songs for Strange Times.

“The album includes two poems Limerick poet Kieran Beville and one by my brother Mike, all of which I put to music” says Austin – unsolicited and undeserved praise (about me) voluntarily given, without threat or inducement!