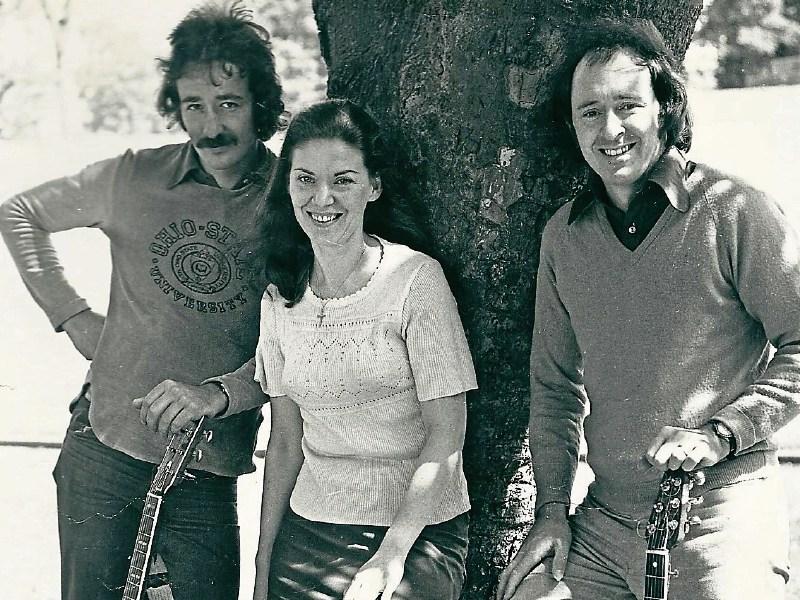 Renowned musician, Austin Durack, has been immersed in the Limerick folk music scene since the mid-1960s. He played support to many top showbands in the Stella Ballroom, Limerick with his first band The Reno, in 1967. They were based in Ballina/Killaloe but sometimes had Limerick musicians – Murty O’Halloran (Drums/Vocals) and Louis McMahon (Sax and Keyboards) in their ranks. They played in various halls around the mid-west but also in a couple of Limerick clubs (including one in Post Office Lane).

In 1968 Austin joined his younger brother, Mike, who sang and played kazoo – a fact I thought he might like to consign to things best forgotten! One of their first gigs was playing support to Emmet Spiceland (one of the top groups on the Irish folk-ballad scene), at one of the then regular ballad sessions in The Royal George Limerick. In 1969, with an additional member they became The Prodigal Sons and had residencies in The Yacht (now Squire Maguire’s) Limerick and Slattery’s, Kildimo, a venue that used to attract many acoustic fans and musicians from the city.

In 1971 (after returning to Limerick from a two-year work and solo gigging period in Killarney) Austin hooked up with the late Jack Hickey who spearheaded the new folk music in Limerick (Tom Paxton, Gordon Lightfoot etc.). “I learned a lot from him, also from Willie Browne who played electric guitar with Reform but was a fine acoustic picker too, and Diane Hogan who with her husband Mick used to run Joe Malone’s, Denmark St. From them I learned how to pick claw-hammer style which would be the basis of many songs I went on to compose later” says Austin.

They had sessions in Donovan’s, Glentworth Street, The Regal (Cecil Street) but sometimes frequented Joe Malone’s and O’Malley’s (Denmark Street). These were great music houses at that time. Austin started to write his own songs and one of his first concerts was in The Crescent Theatre where Bill Whelan was performing a piece of his that had been accepted for a Richard Harris movie. Austin opened for Brendan Grace at The Savoy Cinema around then and that was his biggest stage so far in his solo career.

Austin entered Hughie Greene’s Opportunity Knocks in The Savoy in ‘72 or ‘73 with one of his songs ‘West Wind Best Friend’ but without success. In 1973 his friend Aidan Corr (of The Limerick Leader and music sessions etc.) asked Austin to fill in for him, backing Michael Meaney (Vocals/Accordian) for 2 weeks in a summer residency in The Ardhu Ryan Hotel. It was there Austin met U.S. singer Anne Shumate and started a duo with her. They added another member, Terry O Reilly from Farranshone and became Jabberwocky in 1974.

In 1975 they won an international music competition in Tralee and as a result they were to get tours of Germany and Switzerland. They also appeared on The Late Late Show in 1976. In the same year Austin got an honourable mention in an American song contest for his song 'Crossover' which he recorded with Willie Browne in Denis Allen's studio. The American Song Contest was a prestigious annual event that carried a large cash prize plus some kind of record deal. It invited entries from around the world. So, there was a certain value in getting an honourable mention even without a monetary reward. The accomplished Bill Whelan also received an honourable mention that year for one of his songs.

Jabberwocky then broke up and Austin did a few solo gigs plus a summer residency in The Hydro Hotel, Kilkee with the late John Browne (Bass) who had been an occasional member of Jabberwocky. In the late 1970s Austin was writing songs and making an album became a priority for him.

That first album The Soldier was recorded at Denis Allen’s, with Bobby O’Driscoll engineering and Limerick musicians Joe Mulcahy (Reform bassist) together with the now director of the Limerick School of Music, Dave O Connell (fiddle) together with Nuala Mulcahy and Tadhg Horan (Harmonies). The album opened the door for many tours of Irish, German and Dutch folk clubs in the coming years. Later Austin was managing The Olde Tom Folk Club in Thomas Street, where he opened for many headline acts, including Martin Carthy, Frankie Gavin and Dolores Keane. Austin with his friends Tadhg Horan (guitar/vocals) and Nuala Mulcahy (vocals) started a trio called Balance and had a Saturday night residency in The Glentworth Hotel. In 1983/84 Austin produced two Siamsa shows for his parish of Caherdavin, the second one with Vincent Prendergast. He also played guitar for a couple of Tops of The Town spots in the Savoy.

Austin released his first single, ‘How Many Times’, which received a lot of airplay from Larry Gogan (RTE Radio 2) and people like Ken Stewart and Val Joyce (RTE Radio 1) in 1985. His second single, ‘A Beautiful Flight’ was released in 1986 and it became an airplay hit. Austin performed it on The Late Late Show in that year. Its success led to Austin having a manager – Limerick-man, Declan O Brien and an album called Heroes which had contributions from the best of Limerick musicians including Bryan Meehan (sax and keyboards) and Denis Allen (guitar/harmonies).

Around that time Austin began playing with a fellow Caherdavin man Ray O Brien (bass). With him and Tadhg and Nuala he took part in The Charleville Song Contest around 1987. He and Ray called themselves Double Vision and gigged in Tralee, Killarney, and Clare and had a residency in The Ardhu Ryan Hotel, Limerick. In the late 1980s Austin gigged a lot with Dave O’Connell and together they made an album called High Road to Glory, which dealt with the feats of his Australian cousins, who were land pioneers back in the 1800s and whose story was told by Mary Durack in her book, Kings in Grass Castles. The timing was good as 1988 was the Australian bicentenary year. That helped with the release of the album in Australia and New Zealand by Larrikin Records.

As a result Dave O’Connell and Austin appeared on the Nighthawks TV programme with Shay Healy. They augmented their duo with two other musicians Gerry Ryan (Corbally) and the late Pat Costelloe (Shannon) for that. Austin and Dave also appeared on Evening Extra (RTE 1) with Bibi Baskin in 1989 and played live a number of times for RTE radio programmes, including The Andy O’Mahony Show. These were all recorded in the local RTE studios, Cecil Street.

At that stage Austin’s children were approaching third level education and he wasn’t earning enough to finance that so he felt the need to supplement the music with extra work. He sought advice from a long term advisor on songwriting, Limerick’s Jim Liddane (of the magazine Songwriter) who was about to set up the local Limerick radio station. “He told me he had been talking to Caimin Jones who was the first head of Clare FM. and he was looking for presenters” says Austin. He joined Clare FM in 1989.

Austin had six shows a week as a radio presenter with Clare FM while also teaching guitar in the new Savin’s School of Music and engaging in other new and exciting musical activities as well. Tom Canty was the lead singer with legendary Limerick ballad group, The Farren Folk. Years after the ballad boom he started to perform solo “And somewhere along the way our paths crossed” Austin says. Austin subsequently gigged with him many times in Limerick and around the country. Austin produced Canty’s album, The Dream, in Denis Allen’s studio. “I was honoured that not only did he make one of my songs the title track but he recorded a second one also. It was called ‘Do You Want To Know The Truth About The Wild Colonial Boy’, from my Australian album” Austin says.

To be concluded next week…