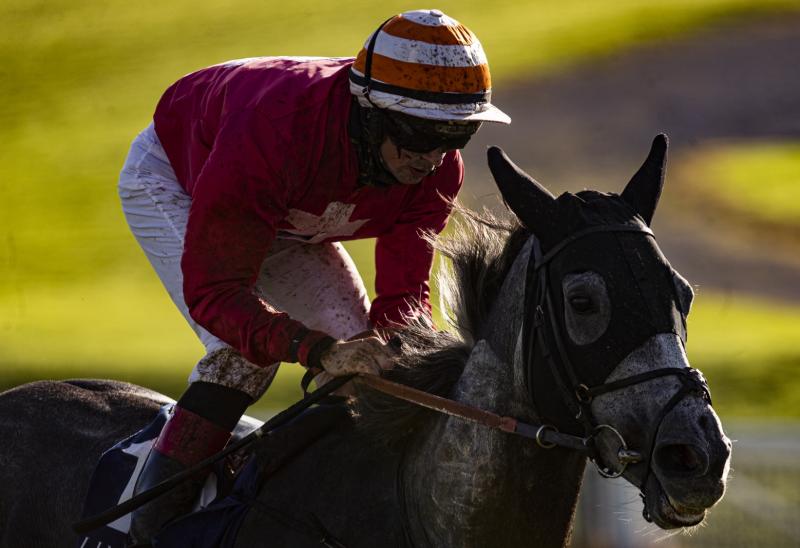 Among the winners at Limerick Racecourse on Saturday was the Austin Leahy-trained Ask Delaney and jockey Conor Hoban Picture: Patrick McCann/Racing Post

SHANAGOLDEN jockey Chris Hayes landed an opening race double but that feat was trumped by Billy Lee who won the final three races on the card at Tipperary on Monday last.

Hayes was first off the mark when partnering the Newtown Anner Stud Farm-owned Enthrallment to land the nine-furlong maiden. The Dermot Weld-trained 7/2 chance finished with a flourish to see off Noel Meade’s 5/1 shot Zoffman, the mount of Colin Keane, by three-parts of a length.

Weld’s son Kris suggested that the Eyrefield Stakes at Leopardstown could be a possible target for the winner. Hayes followed up straight away on the Fozzy Stack-trained Ahandfulofsummers in the fillies’ maiden over the same distance.

It was a little easier this time as the even money favourite scored by three and a half lengths from another ridden by Colin Keane, Ger Lyons’ 3/1 shot Essential Part. Lee rounded out the meeting with a flourish, winning the second division of the seven and a half-furlong handicap on the David Marnane-trained 8/1 chance Cracking Name before taking the five-furlong handicap on Ken Condon’s 4/1 shot Moss Tucker.

His treble was completed in the concluding maiden over the same distance on Condon’s even money favourite Swift Flight which got the better of the Fozzy Stack-trained Notoriously Risky by two and a half lengths.

Ballingarry trainer Charles Byrnes and Herbertstown jockey Donal McInerney made a wining start to proceedings at Galway on Tuesday where Blazing Khal took the maiden hurdle in great style.

The well-supported 100/30 chance was running all over the Gordon Elliott-trained 6/4 favourite Gringo D’aubrelle on the approach to the final flight and pulled clear on the flat to score by two and three-parts of a length.

Castlemahon jockey Mark Enright again teamed up with Curragh trainer Jennifer Lynch to win the second division of the 10-furlong handicap with Wish Me.

Owned by former jockey Barry Cash, the gambled-on 5/1 joint-favourite had loads in hand as he beat the Chris Timmons-trained Jazzelle by a length and a half to give Lynch her second winner. Enright partnered the trainer’s first winner, Clara’s Approach, at Naas in August.

Gowran trainer Jimmy Barcoe sent out the longest-priced winner of the day at Downpatrick on Friday where 40/1 chance Kingston Retreat landed the two-mile five-furlong maiden hurdle. Ridden by Cathal Landers, the six-year-old came from off the pace to lead after the final hurdle and she powered clear for a three and a quarter-length win from Midnight It Is.

Chris Hayes was a winner again at Dundalk on Friday where he won the seven-furlong maiden on the Edward Lynam-trained Jack Rose. Sporting the colours of Lady O’Reilly, the strong 11/8 favourite went clear early inside the final furlong to win by two and a half lengths from the Johnny Murtagh-trained 7/4 chance Navagio.

Rathkeale's Emmet McNamara rode the longest-priced winner of the afternoon at Limerick on Sunday where Allihies took the seven-furlong maiden for two-year-olds. Trained in Carrick-On-Suir by Kevin Coleman, the 50/1 chance was a little slowly into his stride but came from well off the pace to lead inside the final furlong and beat the Joseph O'Brien-trained De Vega’s Warrior by three and three-parts of a length.

Clogher trainer Austin Leahy took the seven-furlong handicap with Ask Delaney which recorded the widest winning margin of the day. Conor Hoban guided the Ellen Leahy-owned 10/1 chance to a six and a half-length success over the Ger O’Leary-trained Born Invincible.

Emmet McNamara’s brother Conor took the maiden hurdle at Limerick on Sunday on the Bellbea Holdings-owned Stumptown. Trained by Gavin Cromwell, the 12/1 chance led in the closing stages to beat Pat Kelly’s Figurehead by three-parts of a length.

Ballingarry jockey Billy Lee rounded off the week in style as he teamed up with trainer Paddy Twomey to notch up another notable success as Limiti Di Greccio won the Listed Staffordstown Stud Stakes at the Curragh on Sunday. Owned by Martin Schwartz, the strong 15/8 favourite had no luck in running but flew home once the gaps opened to beat Joseph O'Brien’s Tranquil Lady by a length and a quarter.

Colin Keane has dominated the jockeys’ championship since the season began in March, his third title has been secure for months and it was fitting that it was at Flat racing’s headquarters that he created a little bit of history on Sunday.

He rode a double at the Curragh and his first of the day saw him set a new mark for the number of winners ridden by a Flat jockey in Ireland in a season.

He partnered his 127th winner on the Ger Lyons-trained Power Under Me in the Hatstone Solicitors Waterford Testimonial Stakes, breaking Joseph O'Brien’s eight-year-old record in the process. And 35 minutes later he had 128 winners to his name as he made all the running on the Sarah Dawson-trained Pretty Boy Floyd to land the five-furlong handicap.

Keane, 27 last month, had equalled O'Brien’s record on Torn at Dundalk on Friday night and said, “It hasn’t sunk in and probably won’t until we start on zero next year and we’re looking back on it all. We try to beat last season’s tally every year but we mightn’t have a year like this again for a while so we’ll appreciate it while it’s here.

"When we got to 100, the next logical thing was to try get to 126. The horses have been in great form all year so that’s why it has happened. I’ve been riding for great people and I have a great agent so I wouldn’t have achieved it without them.”