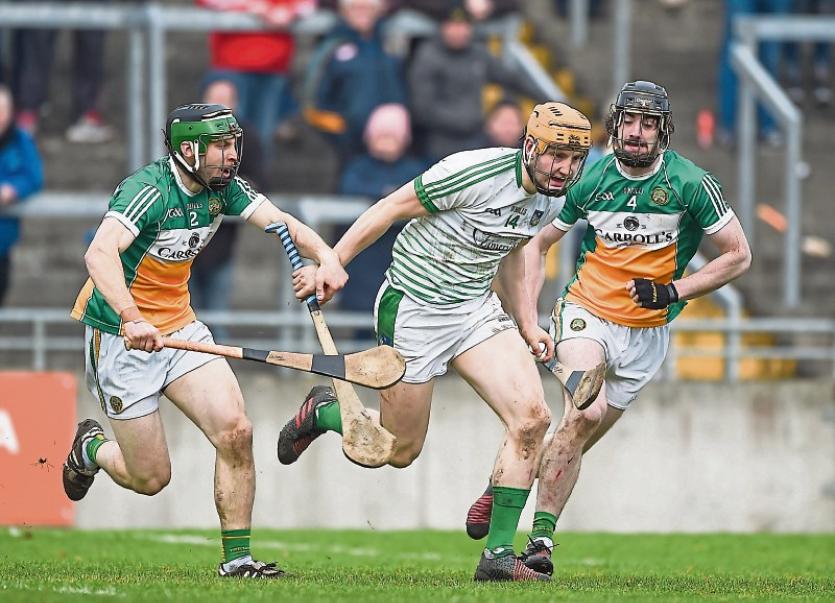 Séamus Flanagan of Limerick in action against Tom Spain, left, and Ben Conneely of Offaly during the Allianz Hurling League Division 1B Round 2 match bewteen Offaly and Limerick in Tullamore

The Allianz Hurling League is only a couple of weeks old but already people are starting to get giddy in anticipation of what might be for the rest of the hurling year.

By any standard, this years league has gotten off to a flying start and many teams look to be in really good form.

Yes, it’s early days, but having seen games now in both divisions I think we could be in for a superb year of hurling. I do think the league will taper off after another couple of games but teams such as Limerick, Clare, Wexford and Cork will make a big push for the knock out stages.

The quality delivered and the level of fitness expressed so far is a fair indication that teams like Limerick and Wexford will push some of the bigger guns this season.

Limerick have a one hundred percent record so far with wins over Laois and Offaly. Many of the younger players are making progress and the competition for places, when others return, will ensure that training and games will have a cutting edge to them.

Teams and players make real progress when they are fighting for places and its been a while since Limerick had this problem. Right now Limerick have a superb crop of young players. The majority of these lads have done really well at underage and they have gained valuable experience over the past couple of years.

This group know what it is to win and most of them have a fine collection of medals already in their bags. That has to stand for something and I get the feeling the team are gelling well together.

What is most pleasing is that they are playing as a team, working hard for each other and if they build on that, they will hurt a few teams before league and championship is over.

They didn’t look composed against Laois but they got the tempo right when they went to Tullamore last Sunday. Offaly went into the game on a bit of high after beating Dublin but I think too much was read into that win. Offaly have a long way to go. Dublin fielded a team of which the majority hadn’t played at that level before.

John Kiely didn’t take them for granted and long before last Sunday a win in Tullamore was his focus. He traveled to Croke Park to see them play Dublin and to his credit he has taken the time to attend colleges games also. The quality in some of the Fitzgibbon Cup matches has been good and Limerick have a huge number of players on show.

It’s too early to see where Limerick are at, but the team already looks to be taking shape. Key positions are being filled and it looks like the management have decided to post Seamus Hickey to full back. He is doing well so far and the more simplistic he plays the better the results.

Cian Lynch is thriving around midfield and his work rate is good. Both he and Paul Browne are developing an understanding and when they get dry ball and dry ground I expect they will do a fair bit of damage.

Work rate is key to any team winning and in the past I have said Limerick haven’t worked hard enough. We are seeing signs that this bunch of players understand the requirement of working hard. Sure skill and a touch of magic is important but the vital ingredient is working. Teams that master this become really difficult to beat.

We know that Limerick potentially has the makings of a very decent forward line and I am looking forward to seeing them express themselves come championship time.

Limerick now have size and they also have power and if the management can mould them they will put fear into many defenders. When you look at the players that are not available at the moment, through their involvement with Na Piarsaigh and others with injuries, it offers real hope for the future.

In 2013 Limerick had a great chance and they failed badly in Croke Park. Like many times before they lost the run of themselves after winning the Munster title. The gap for winning only comes around now and again and teams like Limerick need to be ready to take such an opportunity.

I hear people saying that we will have a great team in two years time. Rubbish, the time is now. Take the chances, go for it now. We have no control of what the future will bring. I have mentioned already that this will be a year of surprises and new teams will emerge as contenders in 2018.

For many of the Limerick players this is a very busy period as so many of them are involved at colleges level. Three Limerick teams have reached the quarter finals but unlike previous occasions Limerick players are to the fore in Limerick colleges. That’s a great learning ground for those players and that will stand to them as they develop with Limerick.

Limerick have Dublin at home for a game under lights in two weeks time and that will be an interesting encounter. Dublin lost to Offaly in the opening round and just about got over the line last Sunday against an improving Antrim.

If Limerick continue to win, it will all come down to the meeting with Galway in the last game. The All Ireland champions did enough to win their opening games but Michael Donoghue is taking no chances. He watched Limerick and Offaly last Sunday so from his point of view he will know what to expect from Limerick.

For now, Limerick have taken care of the business but the big challenges lie ahead. They look like a real team.

After a long wait Na Piarsaigh senior hurlers will make the trip to Parnell Park on Saturday to face Ulster champions Slaughtneil in the All Ireland semi final.

The Limerick champions will be mindful of the last time they played Ulster opposition in this venue and you can be sure manager Shane O’Neill will have left no stone unturned for this contest. Slaughtneil GAA club are quite special and have enjoyed a couple of great years across hurling, football and camogie. They are a strong team but from a technical point of view they will not have the craft of Na Piarsaigh. In the build up for this game Na Piarsaigh have played Waterford and Wexford so you can be sure they will be taking nothing for granted against Slaughtneil. The other semi final is on in Thurles and the current champions Cuala of Dublin are the favourites here. I expect Na Piarsaigh to win and that will set up a cracking final on St Patricks Day.

The Limerick senior footballers have lost their two opening games and it looks like we are in for a few difficult years. Little progress has been made in recent years and much of what I was saying five or more years ago is now coming to pass. When Limerick were doing well and competing with some penetration no real effort was made to build a foundation for the future of Limerick football. It’s hard to see how progress can be made at senior level now. Has the time come for Limerick to drop out of senior and put all their efforts into winning the junior All Ireland title? Some will see that as a daft idea but unless we build a platform there will be no chance of building a future for Limerick football. Some players have walked away and the glamour of playing for Limerick no longer floats a boat for them. We are miles away from the top teams and at some stage someone might just do the right thing and put a plan that will help develop the game, players and teams in Limerick football.