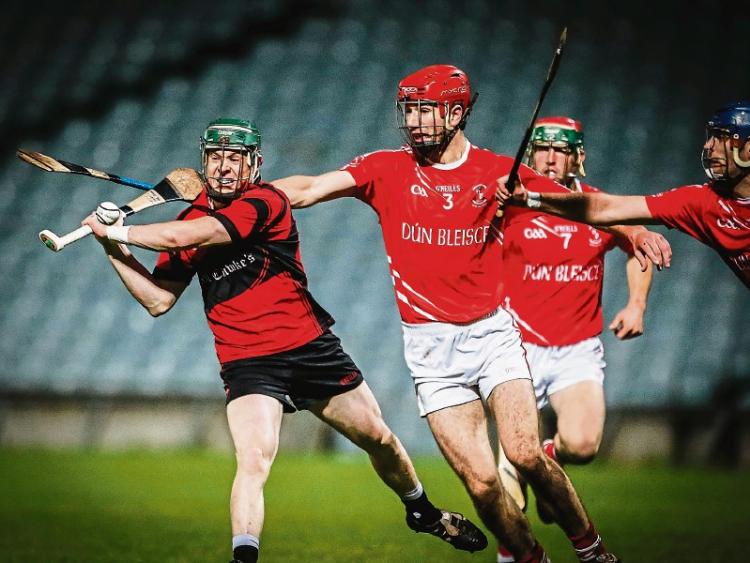 Lights, camera and poor enough action were the ingredients for the first of the TV games broadcast from the Limerick senior hurling quarter finals played last weekend.

The quality over the two games was really poor and at times the standard was shocking. At this stage in the championship one would expect more, but sadly what we witnessed was on a par with many of the games in the earlier rounds of the championship.

The small crowd had little to shout about and I am sure most of them left the Gaelic Grounds feeling less than inspired by what they saw. From a quality point of view these quarter finals were as poor as I have seen in Limerick for sometime. I will accept that it was a bad evening for hurling, but that alone does not explain the poor nature of the games. Of the four teams on view Doon were the only ones that looked like they had more to offer. Simply put they were miles ahead of a hapless Adare that never showed any appetite to battle. This was a poor display once again by Adare in the knock out stages of the championship. They were out run, out played and most of all out hurled by a Doon team that could have beaten them by at least ten points or more.

When it gets to the knock out stages of a championship you would expect to see players work really hard and put themselves on the line but we saw little of that in these quarter finals. Training teams is now a business, a serious money earner for some people that go from one club to another. Winning is the target, but either way many of these lads on the circuit get paid anyway. For all of the training these teams are doing it’s baffling to see so many players out of condition and unable to last a sixty minute game.

For as long as I can remember Doon have always produced good hurlers. At underage level they will match the best of them. They have promised much over the years but on too many occasions they have failed to cross the line. They are improving and some of the younger lads are getting stronger but it would be impossible to judge them based on this win over Adare. I think most people expected more from Adare, they too have some young players but they also have a fair bit of experience. The most disappointing aspect from an Adare point of view was the lack of passion. They were flat, sluggish and slow to the ball and at no stage did they even look like coming into the game. Doon on the other hand had the look of men that came to get the job done.

I was not surprised with that. Any team that Niall Rigney is involved with will have passion and hard work by the bucket full. Rigney wears his heart on his sleeve and he will not be slow to make hard calls. If you don’t do the work or you think you are bigger than the team then be ready to be taken down.

What we saw from Doon is that they are building a team that won’t be too far away from winning a championship. I am not so sure it will happen this year but they are going in the right direction. They have a good spine to their team. Young Tom Hayes at full back was superb. He does the simple things well. Richie English was commanding at centre back while Barry Murphy, Denis Moloney, Dean Coleman, Pat Ryan and Darragh Stapleton were impressive in attack. Moloney was outstanding and showed great leadership.

Doon will now play Na Piarsaigh in the semi final and this will provide a better opportunity to see just where they now stand. It was interesting to hear people in the stand last weekend saying that the title was Na Piarsaigh’s to lose. They have a very strong player base and will go into the game as favourites.

The game between Patrickswell and Ballybrown was very disappointing. Last year Patrickswell beat them well in the County Final but this time round Ballybrown offered much more. It was a poor game but given the amount of possession Ballybrown had they should have won the game.

They hit some very bad wides but despite that they failed to close the game out when they had Patrickswell on life support. The level of performance from a number of players on both sides was well below what they are capable of.

Patrickswell somehow found a way to cling on to the game but they are a fair bit off where they were last year.

The standard of their hurling was poor and they lacked pace and accuracy. Ballybrown had many opportunities but they failed to covert them. They might yet regret those mistakes but they have room for improvement. Alan O’Connor often had better days on frees but his late effort secured a replay for his club.

Cian Lynch came on and while clearly carrying an injury, he did upset the flow and that created space for Patrickswell.

Diarmuid Byrnes is getting back to form and played really well at times but the team as a unit has lots of room for improvement.

Ballybrown will know that they left this game slip away from them. They will need to bring even more if they are to have the better of Patrickswell in the replay. If they hold focus they have the potential to cause a major upset.

You have to hand it to Knockainey. They are the great survivors of senior hurling and last weekend they won the local derby by beating Bruff. Like other small parishes they are suffering from a lack of players but for heart and passion they would match anyone. Bruff have made no real progress and despite a change of management mid year they failed to cross the line. There comes a point when the players must stand up and be counted because management can only do so much. If you don’t put the work in on the training pitch you have no hope and it might be time for less talking and more action by the players in Bruff.

Hard work over a number of years is paying off for Garryspillane who last week reached the Premier minor hurling final. They had a big win over Doon and will face Mungret in the final. Indeed Mungret also had a big win over Na Piarsaigh. Garryspillane have always produced players but this current group have done well at underage and they are making real progress. Dave Ryan has put in a massive effort for many years and from a club point of view they are going in the right direction.

He wore the colours of this club with great pride and people will tell that few pasted him on the edge of the square. He gave outstanding service to his club and indeed the Godfrey family have had a life time association with South Liberties. To his family, club members and friends I offer my sincere sympathy.