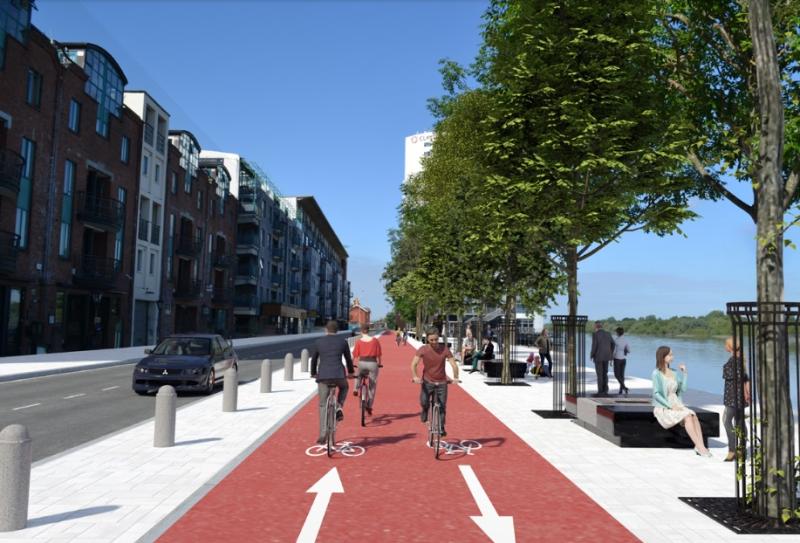 PUBLIC representatives have been reacting to draft plans which could see €1.5bn being invested in Limerick city's transport infrastructure over the next 20 years.

The revised draft of the Limerick Shannon Metropolitan Area Transport Strategy (LSMATS) 2040, which was published earlier this week, was discussed by councillors in a Travel and Transportation Special Policy Committee (SPC) meeting.

Following a presentation by National Transport Authority (NTA) officials to members of Limerick City and County Council on their vision for the strategy, Brian Kennedy, Director of Services welcomed the draft plan.

“Obviously there is huge investment going to be attracted to this transport strategy over the next 20 years. This is a huge opportunity for us to make a once in a lifetime change in Limerick," he commented.

He spoke of a serious “ramping up of investment” in Limerick from the NTA, following an allocation of €24m this year and a 23-strong Active Travel team to help roll out the strategy in the coming years.

Chair of the SPC, Cllr Joe Leddin, welcomed the strategy but stressed the need for a “significant increase” in Limerick city’s population, to justify the level of investment and reap the rewards.

“We have the funding and the engineers here. It’s taken so long to progress the Active Travel cycling routes. What we don’t have here is the full autonomy to get on with it,” he added.

Mayor Daniel Butler commended councillors on pushing back on the previous draft, stating that they felt it wasn’t ambitious enough.

He described the addition of rail links across the city and Shannon as a “huge positive.”

However, the First Citizen expressed concern at the omission of the Northern Distributor Road (NDR) from the strategy.

“By taking the NDR away, we still have chronic issues at the Mackey Roundabout,” he said.

Mayor Butler stressed that the area is a serious bottleneck, and that the situation is “unacceptable” and will likely lead to an accident due to excess traffic joining the motorway.

He asked NTA officials to outline, very clearly, their plan to address these issues.

In response, Hugh Cregan, Director of Public Transport Services with the NTA said: “We will make some explicit reference to the Mackey Roundabout in the final transport strategy, that it needs to be upgraded and measures put in place to address the issues there."

Mr Cregan added: “With regards to the NDR, the transport strategy will provide alternatives to that congestion, but will not fully solve it.”