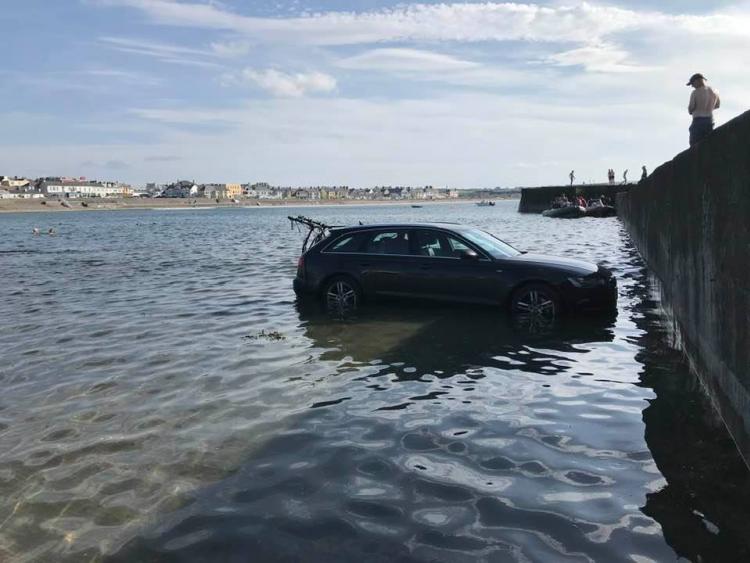 One of the cars before it was removed from the water

TWO motorists had that sinking feeling recently when they returned to find their vehicles submerged in water in Kilkee.

Gardaí were notified of an Audi A6 and Ford Focus which had been left unattended at the pier of the Clare seaside town on Tuesday afternoon of last week.

According to onlookers, one man returned in shorts and flip flops as authorities were making arrangements to recover both vehicles from the water.

One of the motorists “threw off his shoes” and made his way to his car which was flooded up to the bumper, explained Kilkee Civic Trust Secretary Joseph McCloskey.

“He was horrified when he saw the exhaust underwater. He started the car regardless, threw it into reverse and got up the slipway. Water poured out in every direction.”

The second car was less fortunate due to an inability to turn it caused by a locked steering wheel.

It is understood a four-wheel drive vehicle had to be drafted in to assist.

Mr McCloskey, who is originally from Ennis Road in Limerick, added that cars that park on the pier instead of at the pay and display parking lot can find themselves submerged in water.

He also stressed that these vehicles block up major boat access at the pier and that a similar incident of a car in the water was reported the previous day.

“We see it here every summer. People even drive and park on the beach. They forget that there are tides. It’s as if there is an ignorance to the forces of nature.”

“When the tide is fully out, it is essential to park above the high tide mark. Both cars were very fortunate to make it back to land,” he concluded.