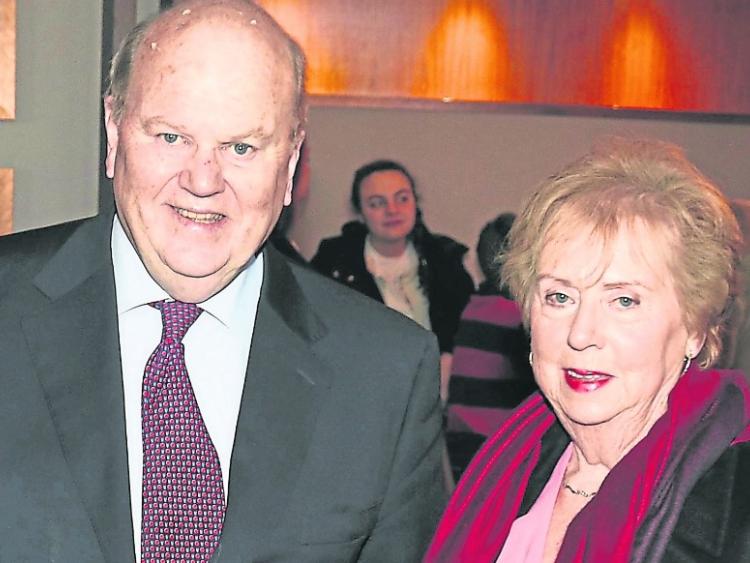 A SISTER of Limerick TD and former Minister for Finance Michael Noonan was one of the three women killed in an horrific road collision near Loughill on Thursday night.

Mary Noonan, who was aged  78 and from Loughill, was the driver of a car which was in collision with another car on the Listowel side of the village at around 6.30pm.

A single woman, she lived near the former Noonan family home at Mount Trenchard, Foynes - not far from where the fatal accident occurred.

Mary Noonan, who worked as a nurse at Aughinish Alumina for around 30 years, was a strong supporter of her brother throughout his political career and regularly attended functions with him including last year's Limerick Person of the Year awards.

Two other women – named locally as Mary Costello, 73,  from Ballinacragga, Foynes and Mary Bradley, 77, from Pallaskenry – were also killed in the head-on collision which happened on the N69.

A fourth woman – Mary Griffin, 70, from Ballynash, Foynes – was airlifted by the Shannon-based Coast Guard helicopter to University Hospital Limerick with what have been described as non life-threatening injuries.

Mary Noonan, Mary Costello and Mary Griffin were travelling together in one of the cars while Mary Bradley was the sole occupant of the second car.

Gardai at Newcastle West are investigating the cause of the collision and are appealing for any motorists with dash cam footage to contact them at 069 20650.

The collision happened on a straight stretch of road near a picnic area overlooking the Shannon Estuary and weather conditions are said to have been good at the time of the collision.

The scene of last night's horror road collision on the N69 near Loughill in which three elderly women died @Limerick_Leader pic.twitter.com/3cSi3EBiLi

Prayers were said for the deceased at 10am Mass at the  Church of the Immaculate Conception in Glin this Friday morning.

Many members of the congregation knew one or all of the women but most were too upset to speak publicly about the tragedy.

“It’s so sad, it’s so tragic for the families that they are left in such a state of shock and disbelief but what can you do,” said local resident Kathleen Wallace.

“There is a sense of shock and disbelief . They are all extremely well known in Loughill/Foynes and the thing about it is they are all from very popular families,” she added.

Fr Tom Crawford, who attended the scene of the fatal collision on Thursday said he was numbed by what he witnessed but did what he was trained to do as a priest.

“Life goes on and you don’t know what’s going to happen like I didn’t know yesterday evening leaving a meeting with other priests that I was going to come across this horrible scene,” he said.

Fr Crawford, who said it will take some time for the community to come to terms with the tragedy, praised the efforts of emergency services who attended the scene of the collision – with many remaining there until the early hours of Friday morning when the road reopened.

Cllr John Sheahan from nearby Glin said a “terrible air of doom and gloom” has descended on the locality and that his thoughts are with the families of each of the women.

“All these people knew one another and people are just trying to fathom out how these things can happen. We know that three of the ladies involved would always have been palling around together enjoying their retirement late in life,” he said.

This tragedy comes just weeks after the community of Loughill celebrated a massive communal achievement, when it opened its new Abha Bhán Parish Park at the heart of the village.

The park, built through a combination of local labour, local fundraising and grants, cost over €250,000 and includes playgrounds for different ages as well as a sensory garden and a walking track.