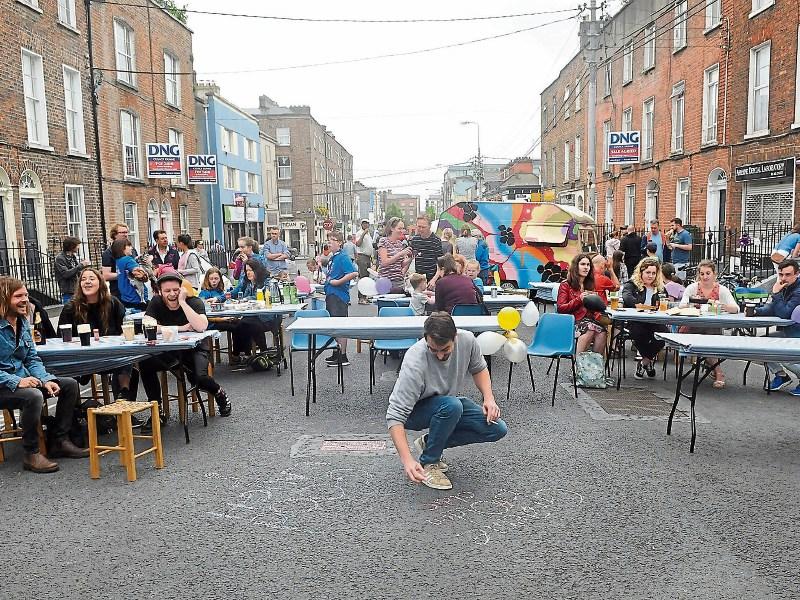 The Catherine Street Feast on Sunday was a great success and was achieved with minimal disruption, Nigel writes Picture: Gareth Williams

Last Sunday, I sat on the steps of a Georgian house and I people watched. I saw kids play with puppets, giant Jenga, chess and hopscotch.

I saw friends gather to share food on a city street. I saw local comedians and musicians entertain the crowd from a specially installed entertainment caravan.

What I didn’t see or hear was a car. For five hours last Sunday a part of our city was given back to people. And you know what? The world did not end.

Thanks to the Liveable Limerick team, Catherine Street was selected to hold a family-friendly community ‘street feast’.

The concept of a Street Feast is very simple. It started nine years ago, when 30 neighbourhoods across Ireland came together to organise their own gatherings. The idea started out as a local solution to building stronger communities and to tackle loneliness and isolation in Ireland.

Limerick’s event was focused on inviting members of the Limerick city community to connect and reconnect with their neighbours and to celebrate the vibrancy of Limerick city.

It worked. It was such a simple exercise in community-building and required virtually no funding and the minimum disruption.

In Limerick, over recent years we have heard plenty of talk about the likes of the Opera Site, the Gardens International, Colbert Station, Cleeves and the city quays.

Yet quietly the Catherine Street part of the city has been the silent phoenix in terms of urban renewal in Limerick. A key development was the introduction of Uber some years back. The company is now employing over 300 young, talented professionals.

Many of these people have experience of living in places where city centre living is the done thing.

The resurgence of Georgian streets in Limerick is in its infancy but looks set to continue. Over recent weeks we have seen a number of Georgian houses come to market in this part of the city. Demand was there as a large group of people attended open viewings of these properties.

Anyone who has had the opportunity to set foot within some of our more neglected Georgian buildings will know the work that is required to bring them back to life. The fact that some of these properties have been allowed to be used as rental properties in their current state is a disgrace.

Thankfully, things seem to be changing.

When the Living City initiative was announced some time back it was criticised. Uptake was poor and it was eventually conceded that amendments were required. Every day there now seems to be more and more of these properties coming to the market suggesting that the concept of Georgian renewal is taking off.

As these parts of our city witness a rebirth it is critical that our local authority shows a commitment to improving the public realm. For far too long most of Georgian Limerick has been allowed to fall into an embarrassing state.

Ghastly electrical cables adorn the facades of our historic architecture. Our street paving is a mish mash of various materials. Street lighting is often minimal to say the least.

Our decision makers do have the power to intervene today to guide the renewal and revitalisation of our urban centre. We need to be creative, responsive and mindful of best international practice in this regard.

What last Sunday showed was that a simple exercise such as closing part a city street really does attract people. There are many, many people living in Limerick who want to be empowered to use it in quirky ways.

What really struck me last Sunday was how children-friendly the festivities were. These children are our city’s future. The event last weekend was quietly educating them as to what a city can be. The people making decisions today will dictate how the city of those children’s future will look and feel.

Isn’t it time that little street parties such as the one seen on Catherine Street on Sunday are not seen as novelty but as a norm?