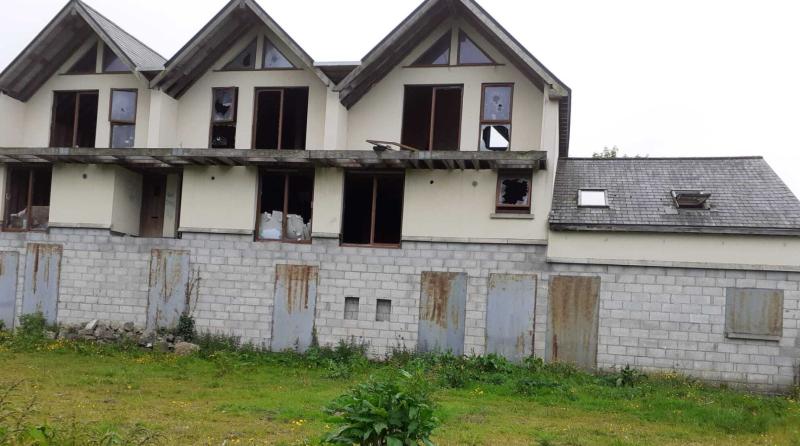 THERE has been another twist in the saga involving an unfinished apartment block in Kilmallock, Limerick which the council plan to demolish, with it appearing for sale on Daft.

It was due to go to auction later this month with a guide of €140,000. The sale was being handled by an estate agent not based in Limerick.

The Leader discovered this on Wednesday, August 3, and contacted the auctioneers.

They said there was “moderate to good interest” in the development in Wolfe Tone Street.

When told that the building they were selling was due to be demolished by the council, the estate agent said it is the “first we have heard of it to be honest with you”.

“Nothing official has come across our desk. We are selling it on behalf of a receiver,” said the auctioneer. The Leader also sent a query to Limerick City and County Council on Wednesday, August 3.

This all dates back to September 2021 when Cllr Mike Donegan got unanimous support for a motion to knock the apartments saying they were an “eyesore, a spot for anti-social behaviour and flooding came up close to the building”.

In 2021, the council’s reply said the Cappamore Kilmallock Municipal District office is “currently assessing the site with a view to advertising a demolition tender shortly”.

The buildings were still standing when Cllr PJ Carey put down a motion this May that they be sold to “an interested property developer and brought back into viable housing provision”.

The council’s reply was that they made a decision to demolish the apartments.

Then at the July meeting, Cllrs Carey, Ger Mitchell and Eddie Ryan put down a motion that the seven apartments “be put on the market with a view to be sold to any interested developers and brought back into viable housing provision”.

Cllr Carey left the meeting, “In protest at not being allowed to speak on this”.

The council’s reply to that motion was that the property is on the Derelict Sites Register and has been acquired compulsorily.

“A structural assessment has deemed that the unfinished and derelict structure is not suited to repair and completion.

“In addition there are planning / flood risk constraints. In view of the above, it would not be appropriate to put the property for sale and a decision has been made to demolish,” read the reply.

It was assumed everything was done and dusted but then they appeared for sale on Daft. Cllr Carey said: “You couldn’t make this up. What is going on?”

Both he and Cllr Eddie Ryan welcomed the news.

They both hoped that the interested developer, who has a track record in restoring unfinished buildings, would purchase the apartments at auction and complete the works.

“They say it is going to cost €31,000 to demolish the apartments. The structure is not that bad.

“They got full planning permission; this isn’t an unauthorised development. We have a housing crisis and this will help in a small way in Kilmallock. It’s a win-win for the taxpayer,” said Cllr Ryan.

The council then replied this Tuesday afternoon to the Leader’s query about the apartments being for sale.

“This site is registered in the ownership of Limerick City and County Council having been acquired compulsorily through legislation of the Derelict Sites Act, 1990 in September 2020. It is planned that the structure on site is to be demolished.

“It appears that the site had been marketed for sale in error by a third party. The estate agents facilitating this have been made aware of this error and the council’s ownership of the site,” said the spokesperson.

Cllr Carey called it a “debacle” and “amateur hour”.

“If the council put more effort into answering my questions instead of trying to silence me they would not be in this mess.

“I asked repeatedly for the structural report to be circulated to the councillors.

“It was paid for by taxpayers’ money, we as public representatives should have that information circulated before any vote.

“There are still a lot of questions - do they have to reimburse the receiver the €140,000? Would they have known about this if the Leader hadn’t sent in a query?

“What if someone had bought the apartments? What then – legal challenges? This is all very, very strange,” said Cllr Carey, who called for a special meeting on the unfinished apartments in Kilmallock “to get to the bottom of everything”.