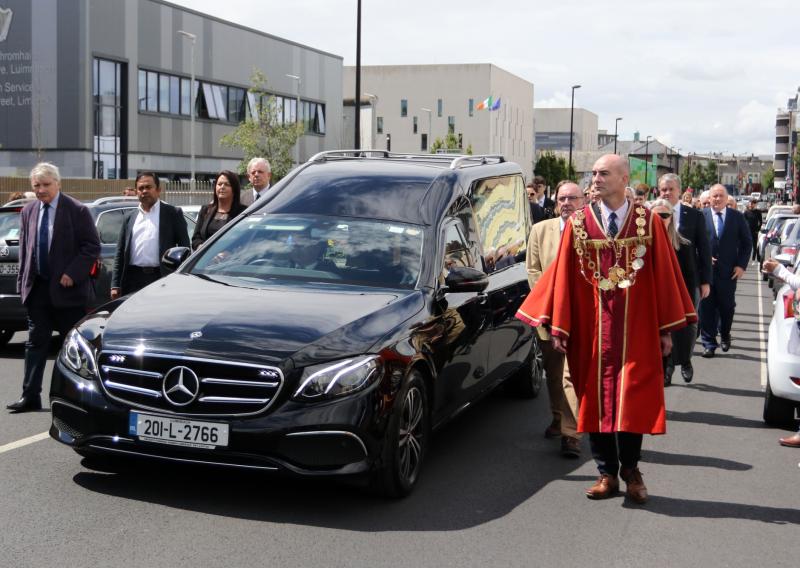 HUNDREDS of people gathered today to pay tribute to the former councillor and Mayor of Limerick City Jerry O'Dea as he was laid to rest.

Mr O'Dea's funeral Mass was held at St John's Cathedral on the same day that he was due to be elected Mayor of the City and County.

Mr O'Dea, formerly of Ballyclough, passed away on Saturday after he suffered a medical episode after finishing work early on Saturday morning.

Fr Frank O'Connor started the Mass by saying that they should be celebrating another milestone in Jerry's life today before symbols representing the 55 year-old's life were brought to the altar.

A cookbook, a painting of Kilkee, the crest of Shannon School of Hotel Management and a miniature Treaty Stone were laid in front of the proud Limerick man's coffin.

Fr O'Connor told Mr O'Dea's family, friends, colleagues from the council and other mourners that the popular publican would be remembered as "forever young".

The Fianna Fáil councillor's brother Andrew shared beautiful memories of "his Jerry" on a day that was very different to what they had planned.

"Jerry would have hated to have missed this, he was in his element with people. Our family have been blown away by the outpouring of condolences, kind words, generous actions and genuine love over the last few days.

"We have heard from some of the many sports clubs Jerry supported and sponsored, his school friends from comp, the crowd from Shannon, the Vintners Federation, Milk Market trustees, An Taoiseach, councillors, the list goes on and on."

Andrew said it was "impossible" to put into words how much Jerry meant to him and their entire family and tearfully asked: "How do you describe someone as unique, kind, giving and free spirited as Jerry?"

His brother listed the many reasons why Jerry was loved by his family and the wider community including being a "devoted father", "going out of his way to help as a councillor" or because he "picked you up and dusted you off when you fell as only a big brother can."

"He was mischievous, funny and sharp as a pin. At times he was infuriating but he did his best to put things right in the end."

Andrew remarked that his brother was always a welcome visitor to his home in Reading, England where he would point out how homely it felt with the abundance of family photos.

"In recent years he had plans to build a house in Ballyclough and fill it with memories, adventures, travels, stories and love. It is such a huge shame that he will never get to complete that dream."

Mr O'Dea's coffin was taken from the church to his resting place at Crecora Cemetery to the words of the apt Limerick You're A Lady.