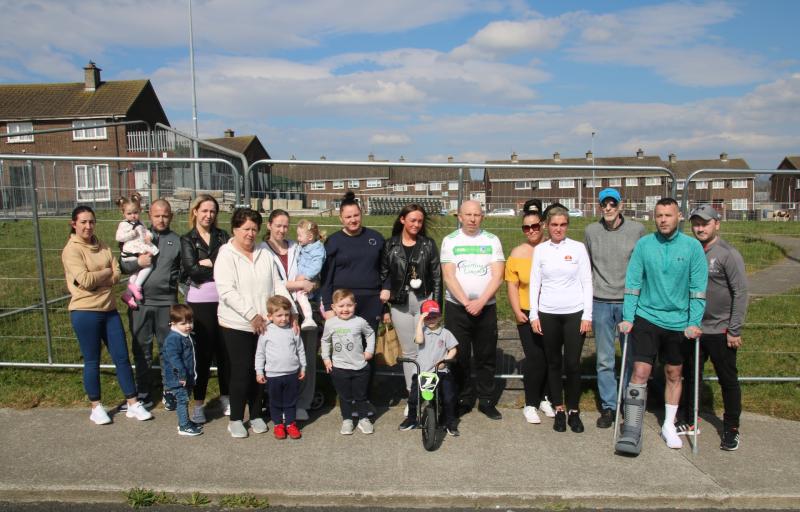 Cosgrave Park residents gathered in opposition to the latest round of development in Moyross | Picture: Adrian Butler

LOCALS IN Moyross have warned Limerick City and County Council against making the same mistakes which led to the area becoming a crime hotspot.

Building work on the latest round of homes under the Limerick Regeneration programme, 57 across Cosgrave Park and Dalgaish Park has kicked off.

But residents are unhappy at what they feel is a lack of amenities for youngsters and families, and claim people "are being put on top of each other" in terms of the location of the homes.

For its part, council says it's been receiving "great community support" for the development and has held "extensive pre-construction" with the Moyross Regeneration Committee and resident representative groups - including an open day held last month.

Despite this, residents gathered outside one of the building sites cordoned off with steel railings yesterday to express their opposition to the lack of amenities, something which was in the past blamed for an escalation in crime in the northside estate at the height of the Limerick feud.

The chairman of Moyross United soccer club Philip Power said: "I know houses are needed, but by God, they've not thought this plan out right."

He said alongside the 57 new homes in this latest chapter in Regeneration, there will also be 108 new homes being constructed beside the planned University of Pittsburgh Medical Centre, and others elsewhere.

"In total, there will be 220 families moving in. If they have two kids each, that's 400 children. In ten years' time. they'll have nowhere to play. We'd be happy to have housing if there were amenities. But we have no amenities in Moyross," he said, "It could become a concrete jungle."

Mr Power said an additional issue is the fencing off of the land - some of which is not set to be developed for a period, has led to elderly residents facing an extended walk to the only shops in the estate at Watch House Cross.

Another local, John-Paul Cahill added: "They are making the same mistake they did when Moyross was first built by putting everyone on top of each other. This will lead to feuds and disasters will happen."

He said council should have spread the housing out more evenly across the estate.

Local activist Dean Quinn said there is "uproar" in the area, and alleged the council did not listen to what residents had to say.

However, a spokesperson for Limerick City and County Council said: "Planning permission for the Limerick Regeneration development at Cosgrave Park, Moyross was approved by the elected members of the council in 2015. Following extensive pre-construction consultations with the Moyross Regeneration Committee and resident representative groups leading up to this point, the first phase of this development consisting of 30 units is being advanced to construction stage as part of an amalgamated development of the adjacent Dalgaish Park area."

"Limerick City and County Council has been receiving great community support for this new housing development which seeks to improve local connectivity and generate an improved sense of place in addition to delivering much needed new homes. Moyross Regeneration Committee including Moyross Residents Forum were updated regularly over the last year in relation to project progress," they added.