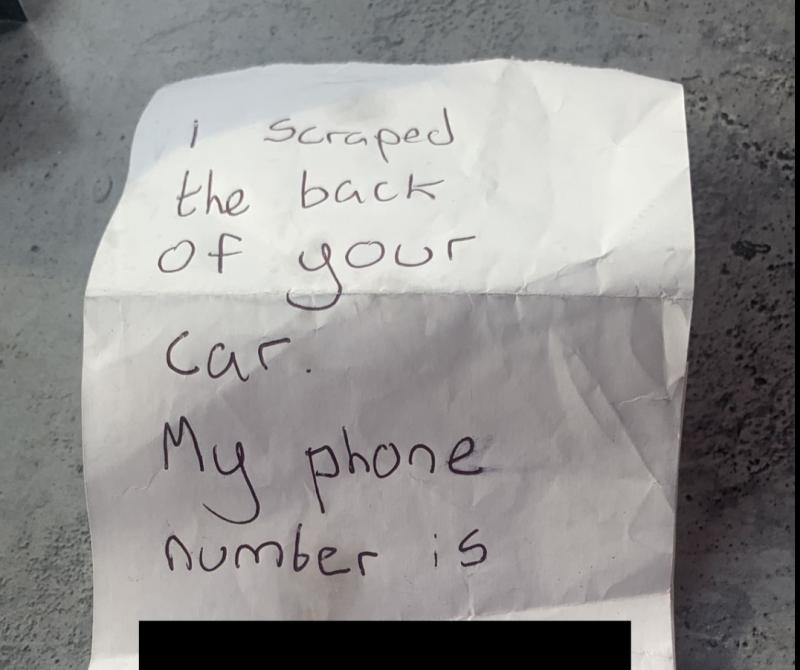 The note from the honest young driver

A LIMERICK woman has been praised for not seeking financial compensation against a young driver who accidentally scraped her car.

Sabrina Dawson was out for lunch with her partner John, who was marking his 50th birthday, in the city centre over the weekend, when she arrived back to her parking spot in Lower Cecil Street to discover the rear bumper of her silver Ford Focus had been scraped after the other driver was trying to reverse into a parking spot.

He then honestly left a note with his telephone number apologising for the incident, and leaving his phone number for Sabrina to contact him.

It was first highlighted in the Random Acts of Kindness Facebook group - which allows people to anonymously submit acts of goodwill.

Sabrina, who agreed to be identified, said: "It’s not everyday that someone goes to the trouble of owning up to their mistakes. Needless to say I thanked him and left him off with it as he was so kind to leave a note."

Taking up the story, Sabrina, who lives in the Old Cratloe Road, said: "We were in such a good mood that day. He was lovely, he was very relieved. We told him it was fine, and we'd let it go as a good gesture. We were thanking him for leaving the note on the car."

She confirmed the other driver insisted on paying, but at the same time, she was insistent that they let it go due to his honesty.

"There are people out there who go above board when it comes to people paying. They'd go and get the most expensive quote and everything. I wouldn't like to see that happen to anyone, especially a young driver," Sabrina said.

"He could have just driven off and not say anything. I've had people do that to me before where they scrape the car and not left any note. So I was really thankful he left a note," she added.

Although Sabrina was in a good mood when she saw the note from a distance, she initially thought it might have been something which would have turned it sour in quick order!

"When I was walking towards the car and saw the note, I thought I had received a parking ticket at first, as it was placed under the wipers. So it was a relief it wasn't a parking ticket," she laughed.