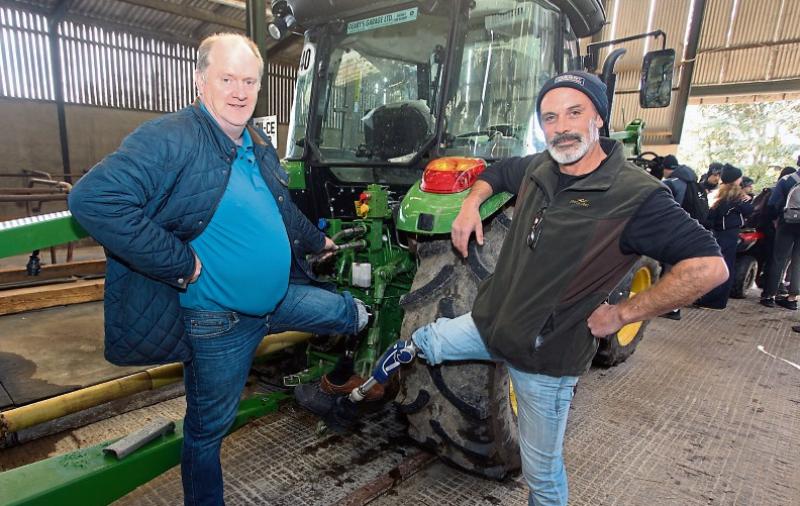 IF A picture paints a thousand words then this one sadly paints 2,000 words, says Gabe Cronelly.

He is pictured with Peter Gohery. Gabe says the two are “like brothers” since they met in the National Rehabilitation Hospital. They are both amputees following separate accidents three months apart in 2009.

Gabe was injured when a shotgun went off. Peter’s accident involved a tractor’s PTO shaft. The two men were speakers at a farm safety display and talk on mental health in Salesian Agricultural College, Pallaskenry, organised by Garda Enda Moroney.

Gabe said he and Peter unfortunately went to the university of hard knocks.

“We met in the National Rehabilitation Hospital when the two of us were there getting prosthetics. We’re like brothers since. 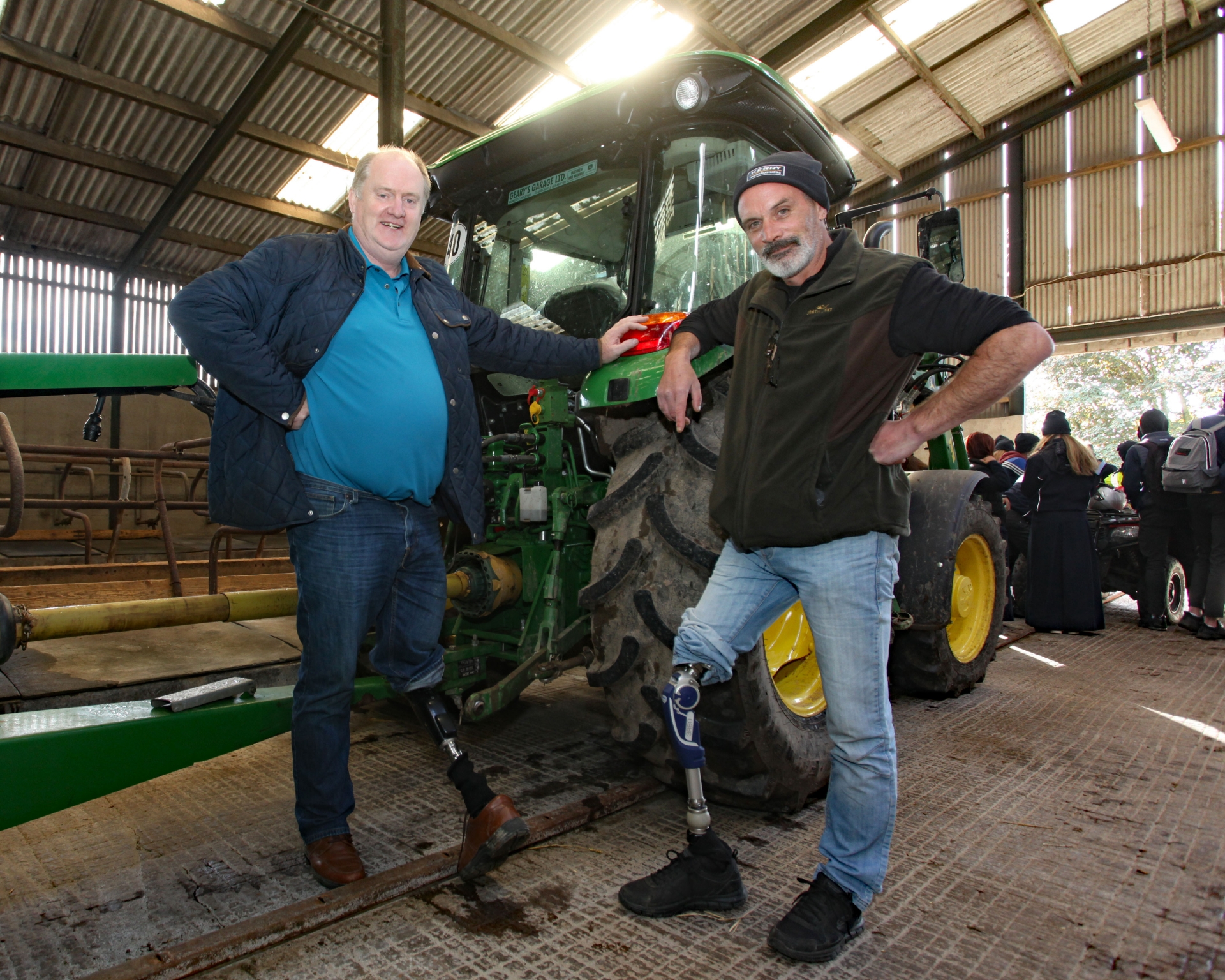 “They are quite graphic photos but they do exactly what they are supposed to do – create awareness. If we can prevent one accident it is worthwhile doing these talks,” said Gabe, who is a county councillor from Athenry.

He was out hunting in December 2009 when his life changed.

“It was an accidental discharge of a gun. It was another fella with me. It was the first of the bad winters. Possibly his hands were cold and it accidentally discharged a couple of feet away from me. Mine is a visible scar and his is a mental one.

“There are so many farmers around the country with shotguns. I talk about gun safety at events like this,” said Gabe.

It happened when he was 39.

“In the blink of an eye a lifetime can change if you’re lucky and you survive. Go around with your two eyes open and don’t be distracted with mobile phones. No matter what prosthetic you get it will never replace the original you’re born with,” said Gabe.

Peter, aged 54, from Eyrecourt had his accident in October 2009. He had moved back from America 10 years before and took over the family farm following his father’s death.

On that fateful day he put on his overalls and his steel toe capped wellingtons as he was going dosing and dehorning cattle in a crush. Just before dinner his knee came out through the waterproof section and as it was annoying him he got the scissors out.

Peter said he left a “tail” of about 4 to 6 inches. Later on he went feeding cattle in a shed with his diet feeder.

“I could hear a noise coming from inside it. I got down from the tractor and climbed up on the ladder to see what was wrong. I left the tractor barely ticking over with the PTO turning. As I walked around the tractor I said I'd change the hydraulic lines because they weren’t in right.

“Then I noticed I couldn't feel the ground with my left leg when I went to stand back. I said 'something's wrong here', I looked down and saw the leg was clean off of me below the knee

“It stripped the overalls off me without me really knowing it. It made a rope effect, squeezed the left leg and pulled it off me,” said Peter.

Skin and muscle on his right leg was stripped to the bone and shattered his ankle. Peter had also broken two bones on his left arm. 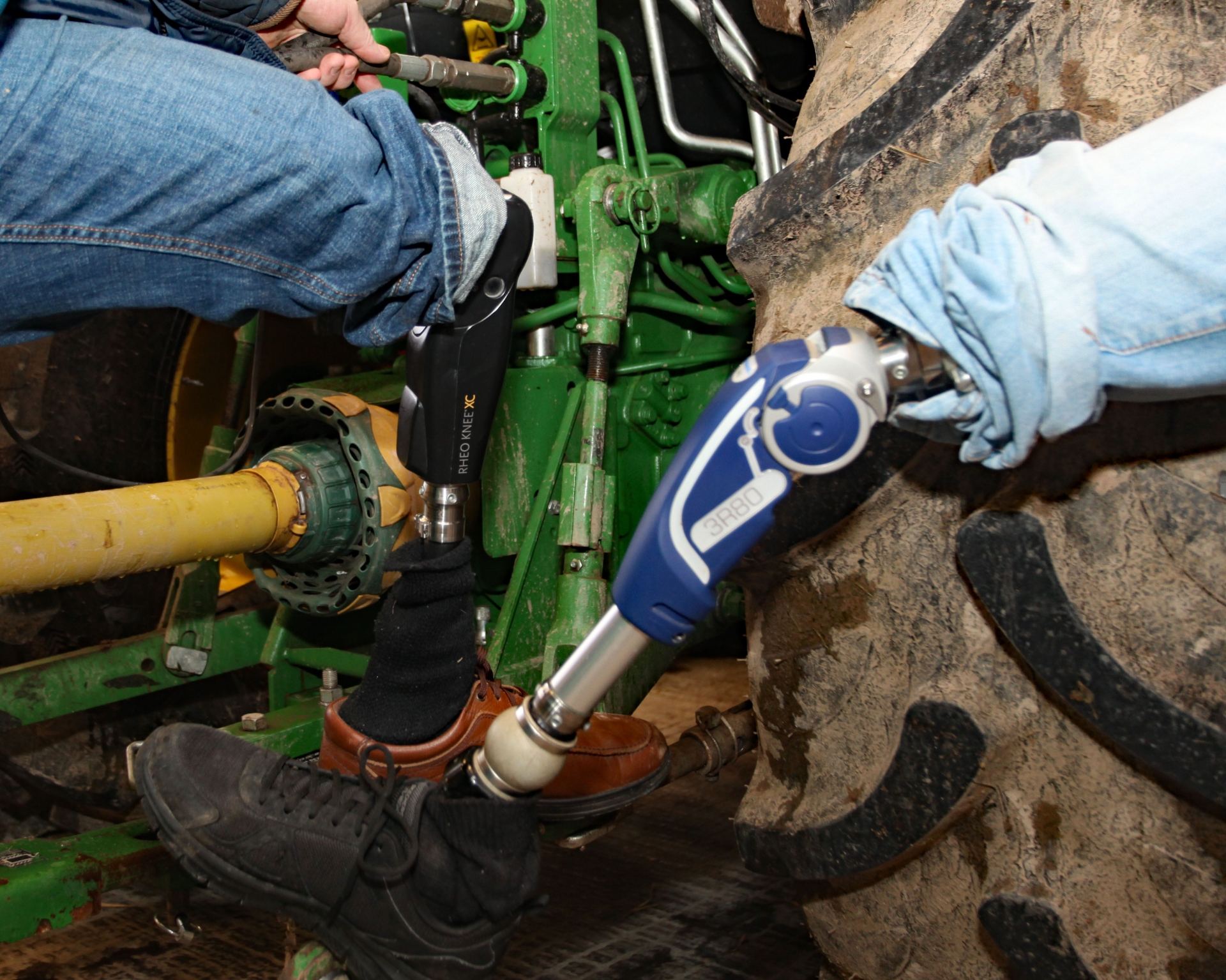 While the vast majority of farmers are aware of the dangers of a PTO with no guard, some might not be aware of the vacuum effect which sucked in the thread on his overalls.

“The PTO creates a slight vacuum - it sucks anything in close proximity to it,” explains Peter, of Embrace Farm. Like Gabe, Peter said he is “alive and getting around” but doesn’t want it to happen to anyone else.