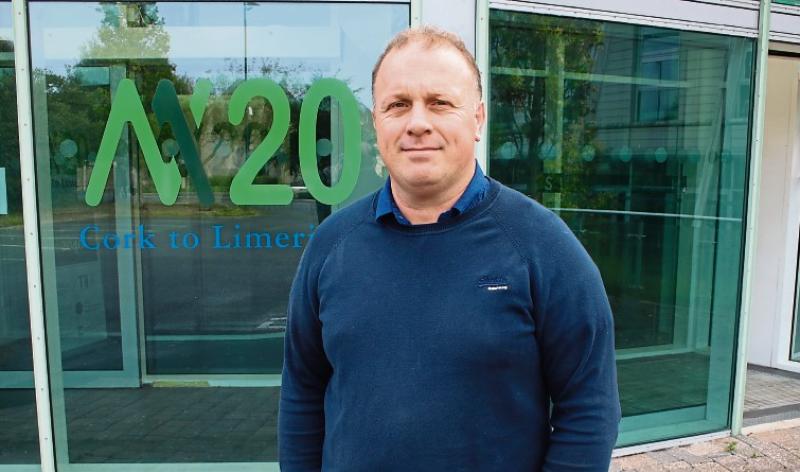 THE project co-ordinator on the €1bn M20 Limerick to Cork road project says no decision has been made if it will be motorway or dual carriageway.

But Jari Howard has insisted that “there’s not a lot of difference” between the two, and confirmed that: “Even if it’s not a motorway, there will still be a project” to link Ireland’s second and third cities.

With the preferred route option to be unveiled in early 2022, he has urged farmers and landowners impacted, to work with the design team, adding: “Wherever we want to build infrastructure, and especially in this part of Munster, you can’t avoid good land.”

This comes after local Green TD Brian Leddin, and the party’s leader - Transport Minister Eamon Ryan - cast doubt on whether the link will be categorised as a motorway when an update to the National Development Plan was announced last week.

Mr Howard, who has also worked extensively on the Limerick to Foynes road in the past, has also warned the “window of opportunity is narrowing” to get this link in place in time for the 2027 Ryder Cup at Adare Manor – and ensure the village is bypassed to stop traffic buildup.

An Bord Pleanala has again postponed its decision on the new, 35km road, which is designed to link in with the new Limerick to Cork route near Patrickswell.

The national planning body is expected to make a decision next month.

Mr Howard expressed confidence it will happen, saying: “I think the Ryder Cup adds another dimension that other schemes do not have. It’s a flagship event for Ireland, and will be huge for Limerick and the region. I’d be very surprised if there’s any opposition from government in a funding sense. That one has the best chance.”

On the Limerick to Cork project, Mr Howard said he hopes in as much as possible, the existing N20 road will be used. “There are some sections of the existing road which won’t be able to be improved to a dual carriageway standard. To widen the roads, where there are existing properties, you are talking about a huge impact, and serious impacts on a lot of properties. Where we can use the existing, we will try to.”

“As a bare minimum,” however, he said, the towns along the route will be bypassed. While Croom is already bypassed, towns in North Cork on the current N20 including Charleville are not.

This week, many farmers who may be impacted by the route have spoken out again, with Granagh man Jimmy Sheehy saying: “It seems they’re intent on cutting up some of the best dairy land in the country.”

Mr Howard said: “We don’t intend to do harm to any farm, we’d try to minimise that as much as we can. But there will be impacts on individual landowners, and we have to acknowledge that. The most important thing is for them to talk to us, to work through it, especially if they become part of the preferred option.”

“It is tough on the individual, but you cannot build major linear infrastructure without acquiring land. I wouldn’t be happy. These are inter-generational farms, my wife is from a farm in Kerry so I understand the passion for the land, and the desire to hold on, or gain more land. It is difficult, but we have a good process to work through it,” the co-ordinator continued.

“The current traffic is back up to pre-Covid levels. We’ve a range of traffic. We have around 25,000 coming into Cork, and 17,000 coming into Limerick. There are sections of the route where it gets down to 13,000. But that’s growing, and obviously Cork and Limerick are destined to increase population, so there will be more movement,” he explained.