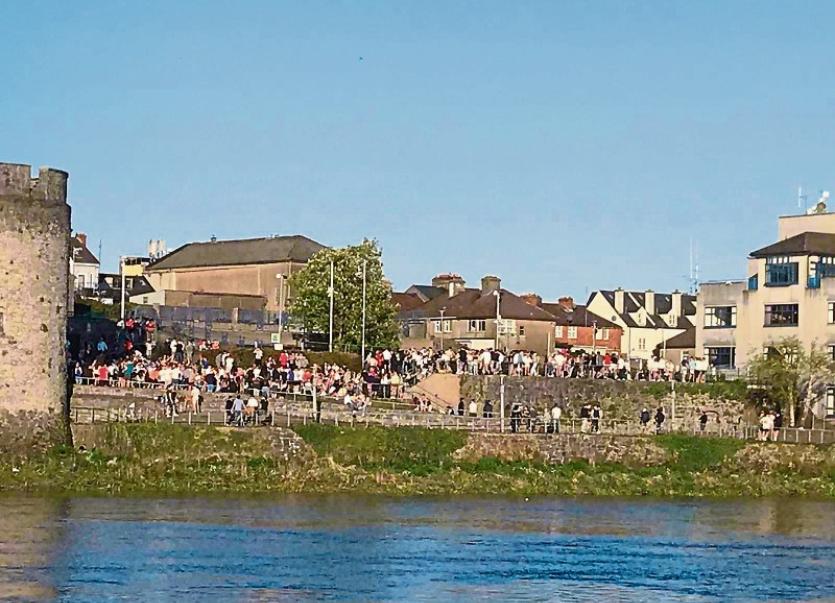 WITH political leaders and health bosses urging an “outdoor summer”, anger has been expressed at anti-social behaviour and littering following open-air drinking in Limerick.

Glorious sunshine over the weekend saw many people relax by the River Shannon.

And while the vast majority were well-behaved, gardai were forced to intervene in a number of large congregations of people.

The local authority has stepped up its cleaning shifts this week following an increase in littering, with one councillor, Conor Sheehan, condemning the “absolutely disgusting” and “feckless” behaviour of some people.

Locals living in Clancy’s Strand say they were subjected to a “hail of abuse” when they confronted some of those drinking, with claims some were “urinating” against walls – something backed up by Cllr Sheehan.

All this comes as An Taoiseach Micheál Martin prepares to address the nation later this week, with a slow re-opening of society widely expected to ensure the progress made in controlling Covid-19 is maintained.

The resumption of construction, the re-opening of hairdressers and personal services, the phased return of retail and a re-start to in-person religious services are expected in May.

Outdoor dining is due to resume in either May or June. June likely will see the re-opening of guesthouses and hotels, with a ban lifted on travel outside county boundaries then too. Indoor hospitality will only fully resume sometime in July, it is thought.

While pubs are not allowed to trade indoors, they are allowed to sell take-away pints, bottles and other alcoholic drinks, with a number of bars in the city opting to do just this over the weekend.

However, many feel that this contributed to an upsurge in littering and anti-social behaviour across Limerick.

Cllr Sheehan said he had seen big crowds gathering along Brown’s Quay in Thomondgate, the boardwalks and beside King John’s Castle.

“The vast majority of people are doing their best. But there is a minority who engage in feckless behaviour. It’s not acceptable to gather absolutely massive crowds playing music, and leave your rubbish behind,” he said, claiming that the litter left beside King John’s Castle could fill an entire rubbish truck.

He said this adds weight to his call for more public toilets in the city centre, something the local authority has so far ruled out.

The Labour councillor will submit a notice of motion to the next metropolitan meeting.

A garda spokesperson confirmed “on a number of occasions” officers from Henry Street approached members of the public congregating in the city centre.

A member of the Clancy Strand residents association – who did not wish to be identified said: “It was a rough weekend. But we’ve seen this coming months and months. Everything that happened here was drink-related, and it led to aggression. How someone didn’t fall into the river or get killed by a car was a miracle.”