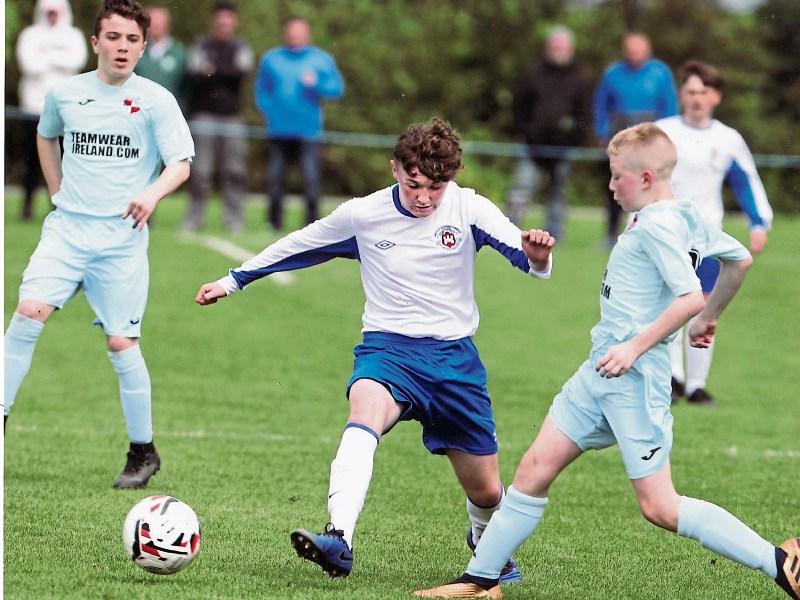 Rian O'Halloran, centre, in action for the Limerick Kennedy Cup side in 2019 | PICTURE: DERMOT LYNCH

THERE is immense sadness in Limerick this evening after the news of the sad passing of a young sportsman to cancer.

He was described as being a “warrior”, but also “kind and charismatic”, and a “born leader “ with a “natural football brain”.

He had been diagnosed with osteosarcoma, and had undergone intensive treatment at Crumlin Hospital, which resulted in the loss of his right leg. It led his friends at St Clement’s College to raise more than €50,000 as part of the Miles4Rian campaign to help his family pay to adapt their home.

Tributes have been paid to the teenager from both Shelbourne FC – where he was under 16s captain – and St Mary’s RFC.

In a statement posted to Facebook, Tony Cusack, chairman of Shelbourne, wrote: “This is one message I never wanted to post. Rian was widely regarded not just within the club but across the local football and sporting community. He received numerous awards and represented the LDSL In the Kennedy Cup. He was a tough tackling centre back with a natural footballing brain. He was a born leader and was an absolute gentleman with a wonderful warm smile. Rian also excelled at rugby and he played with St Mary's RFC.”

This is one message I never wanted to post. Our fantastic U16s captain, Rian O'Halloran, lost his brave battle earlier...

Tony also described him as a “great, loyal member” and recalled the youngster’s joy when his beloved Liverpool FC won the Premier League title last season.

“Rest assured Rian, you will never walk alone,” he added.

His rugby club added: “Life can be very cruel at times, and sometimes words are difficult to portray how special a person was.”

“Rian was most definitely a special person to all who met him. Warrior, kind, charismatic are but a few words to describe him. He was a gentle soul who was a talented sportsman,” the Corbally club added.

“He was a leader, a teammate, a captain, always smiling, always respectful, always dependable.  Never forgotten, always missed. We will cherish the great memories you have left us Rian and you are now at peace. No more suffering. There will be a special bed in heaven for a special boy.”

A very very sad day in the club today with the passing of our Honorary Life member Rian O'Halloran. Where to start,...

St Clement's College also paid tribute, saying their Transition Year pupil was "a fantastic student and friend to all who knew him. He will be missed dearly by all here in St Clement’s College."

Counselling is being offered to bereaved students of the city school.

It is with great shock and sadness that we inform you of the passing of Transition Year pupil Rian O’Halloran. Rian was...

Rian passed away peacefully at home surrounded by his loving family.

The cherished son of Ray and Debbie, he was dearly loved brother of Aaron.

A private requiem Mass, for family only, will take place in St. John's Cathedral this Thursday at 11am, and will be able to be streamed at https://www.churchservices.tv/limerickcathedral

He will be laid to rest at Mount St Lawrence. Family flowers only please. Donations, if desired, to Milford Care Centre or the Irish Cancer Society

In compliance with the current HSE guidelines, the funeral will be limited to 10 people.