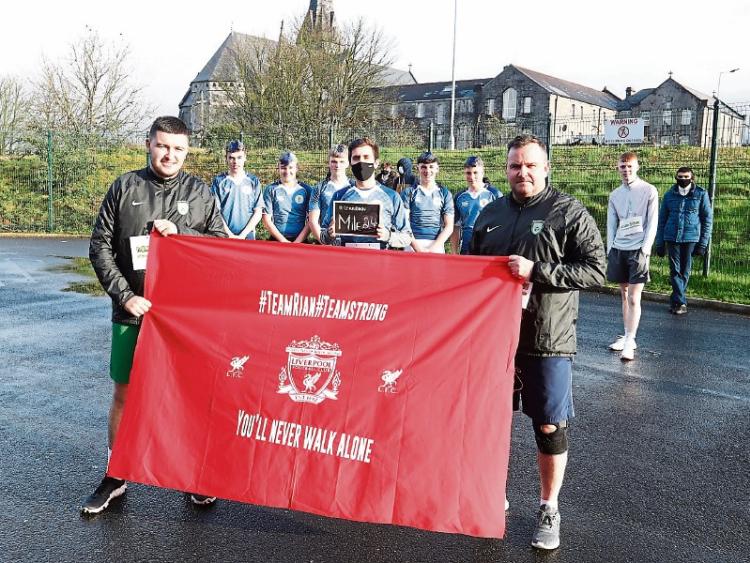 Aaron and Ray O’Halloran with David Tidswell, St Clement’s and the TY year students before the start of the last run | PICTURE: Keith Wiseman

Students have run hundreds of miles as part of a unique fundraiser to raise money for a teenager who lost his leg to cancer.

The Transition Year class at St Clement’s College took part in the final mile of the Miles4Rian challenge, and raised €4,000 for their school pal Rian O’Halloran, who was diagnosed with osteosarcoma and will need to have a prosthetic leg.

A core team – including the 15-year-old's science teacher David Tidswell – ran 24 miles in 24 hours, with the overall bid raising over €50,000 which will go towards adapting his home.

The run took in many of Rian’s haunts – including St Mary’s Rugby Club and Shelbourne Soccer Club. But it ended in his school, where the entire class took part in the final mile.​

Addressing his students, David said: “Given what's happening in the world at the moment, for one class of 15 and 16 year olds to raise €4,000 is insanely incredible, and ye should be very proud of yourselves.”

He thanked the school’s fundraising committee, staff, and of course students.

The O’Halloran family themselves were praised, with David saying: “For the past 24 hours, we have all been wrecked. We've been tired. We've been out in the hail, the rain, the sleet, snow and wind. We've literally seen every single season.”

Sadly Rian could not attend the finish line – but his brother Aaron, 20, says he’s “overwhelmed” with the support.

“It will mean loads, to get the house done for him, to allow him to get back dome sort of normality. He's at home at the moment, getting on with it, and looking forward to whatever's coming. We were sending him on videos from the fundraiser last night, and he was a bit overwhelmed with all the support alright,” his elder brother added.

Donations to the GoFundMe page will remain open until this weekend.