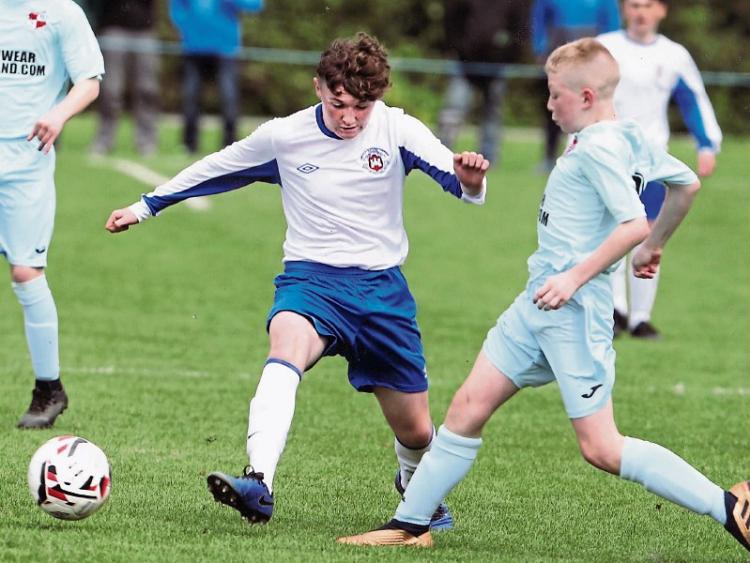 Rian O’Halloran, white jersey, in action for the Limerick Kennedy Cup side last year in UL

A PROMISING young sportsman has tragically lost his right leg to a rare form of bone cancer.

Rian O’Halloran, 15, has been diagnosed with osteosarcoma, which accounts for just 3% of the cancers impacting youngsters.

The popular lad, who plays rugby for St Mary’s and soccer for Shelbourne, has undergone intensive treatment in Crumlin Hospital and will eventually have a prosthetic leg fitted.

Now, his pals at St Clement’s College have rallied to help raise money to help adapt his family home just off the Childers Road, with over €16,200 donated so far.

It was initially thought to be Osgood-Schlatter disease, a common cause of knee pain in growing teens who are particularly sporty.

“However, the swelling persisted and his ongoing discomfort led to further tests. Months of x-rays, MRIs and scans followed until he was sent to Our Lady’s Children’s Hospital at the start of lockdown for a biopsy,” Gill said.

It was then the family received the devastating news of the cancer, with further tests revealing it to be metastatic osteosarcoma, meaning it spreads to secondary locations in the body.

His leg was amputated earlier this summer following four months of aggressive chemotherapy to reduce the tumour, which Gill said “ravaged his young body”.

“Rian’s life changed overnight beyond all recognition – along with the lives of his mam Debbie, dad Ray and older brother Aaron,” she added.

Despite this, Gill says her nephew is keeping the good side out.

“He is a very resilient kid and has a wicked sense of humour which has definitely helped,” she said, “But he is an avid sports fan which makes this all the more heartbreaking. He is such an active kid – really good at the football and rugby, captain of his under-15 team at Shelbourne, in Limerick’s 2019 Kennedy Cup team, and a St Mary’s RFC player of the Year.”

From noon on December 2, Rian’s science teacher at St Clement’s David Tidswell will kick off a unique fundraiser, where he will run a mile each hour for the next 24 hours. He will be joined by Rian’s friends and local personalities, for the event which ends 12pm the folllowing day.

Donations are still being sought.

Speaking of his student – who has taken a break from Transition Year – David said: “He is a fabulous young fella. Any time he’d come into class, he’d have a big smile on his face, he’s ask how you are, and every single time, he’d thank you as he left. He was one of the most polite young fellas.”

Rian has been told by the staff at Crumlin that once the prosthetic leg is fitted, there will be nothing he won’t be able to do. His aunt Gill hopes they may have a Paralympian on their hands!

To donate to the fundraiser, telephone St Clement’s College at 061-315878, or alternatively, you can visit the Miles 4 Rian GoFundMe page