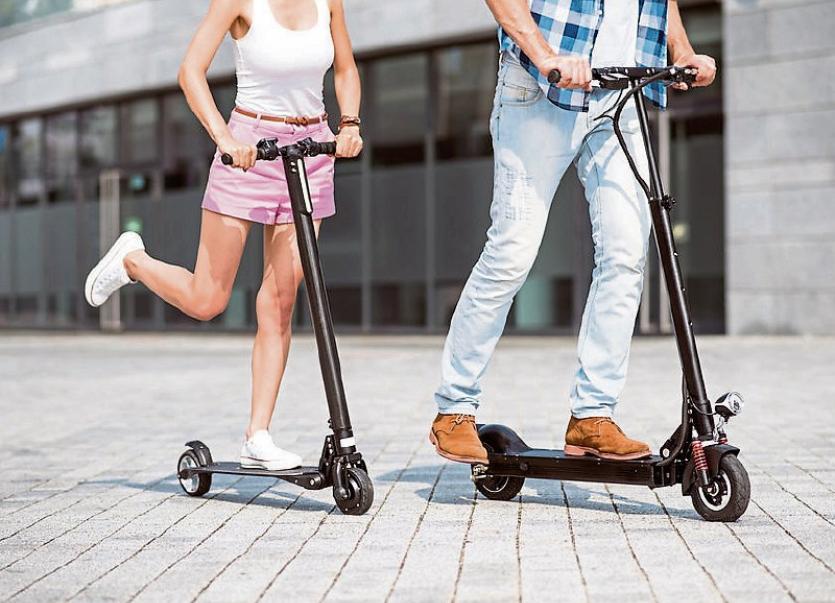 “They are highly dangerous. Sometimes you have two people on the one electric scooter. They fly along at some speed. Someone is going to get seriously hurt," said Cllr Tom Ruddle

THERE were a number of charges made against electric scooters at a Newcastle West municipal district meeting.

“They are a major safety issue,” said Cllr Tom Ruddle, who submitted a question saying they are “highly dangerous for young and old pedestrians when used on footpaths in Newcastle West”.

“Can the council put signs, messages on footpaths to make people aware it is not acceptable? I thing the council should also liaise with the gardai on this,” said Cllr Ruddle. Speaking at the meeting, the Fine Gael councillor said he has got numerous complaints about electric scooters.

“They are highly dangerous. Sometimes you have two people on the one electric scooter. They fly along at some speed. Someone is going to get seriously hurt.

“I know of people who have come out of shops and missed been hit by inches. If an older person got hit by one it is all over. Something needs to be done regarding signage or putting messages on footpaths,” said Cllr Ruddle, who also highlighted the dangers of cycling on footpaths.

“Because they are silent they come up on you without being aware,” said Cllr Scanlan, who also raised bikes being cycled on footpaths.

“I have stopped a number of youngsters cycling on the footpath on the Dromcollogher Road. They were not aware it was illegal,” said Cllr Scanlan.

Mayor Michael Collins said he has spoken to the local sergeant. “He said he would keep an eye on it. The problem is the gardai have to see them. In a few seconds they are gone. Something has to be done before a person is seriously hurt,” said Mayor Collins.

Cllr John Sheahan said they just have to be careful regarding elderly people using motorised aids. “We don’t want to force them from the footpaths onto the main road and a lorry ploughs into them,” said Cllr Sheahan, who commended Cllr Scanlan for stopping and talking to the youths cycling on the footpath.

The council gave a lengthy response to Cllr Ruddle’s question.

Part of the reply reads: “Since 2015 gardai have the power to stop cyclists and fine them for specific fixed charge cycling offences. Included in these offences are riding a bicycle without reasonable consideration and cycling in a pedestrianised street or area. The law in relation to e-bikes and e-scooters is somewhat less clear.”

The council concluded by saying they well discuss this matter with gardai.