Limerick man watches Spurs-Arsenal in company of his footballing hero 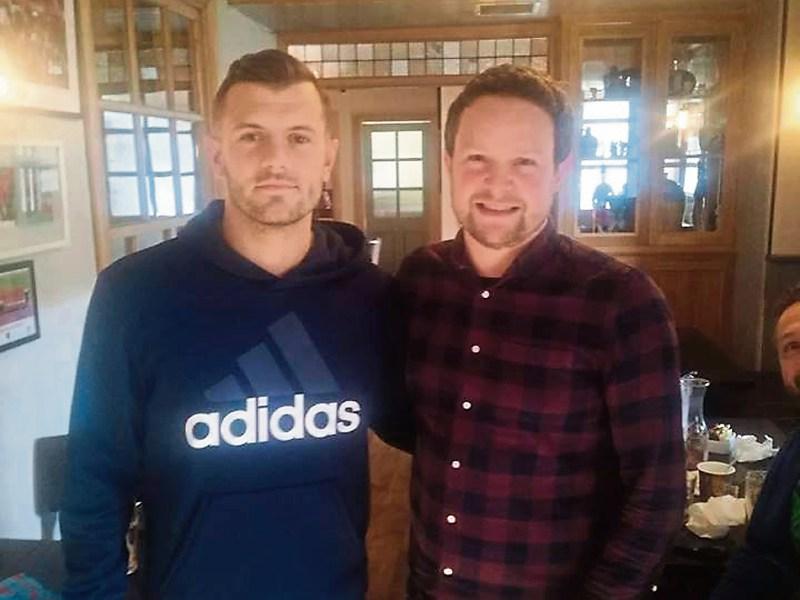 IT’S not every day you to go work and you meet your footballing hero.

But that’s exactly what happened to Bobby Byrnes’s food hall manager Stephen Byrne over the weekend, when he watched the closing stages of the Tottenham v Arsenal game with former Gunners star Jack Wilshere.

The midfielder, who now plays for fellow London club West Ham United, has been in Limerick, while having treatment in the area, as he continues to nurse an ankle injury sustained just before Christmas.

On Saturday, Jack – who remains a huge Arsenal fan – joined a couple of friends in Bobby Byrne’s pub at O’Connell​ Avenue to watch the North London derby.

Unfortunately, Stephen could not get the time off to watch the game – but he timed his break so he could at least watch the first half of the game, in which his team went 1-0 up at Wembley.

During the second half, he kept an eye on the score and came across the 27-year-old England international watching in the pub’s back room.

“When Tottenham had equalised, I poked my head in to find out if anyone knew who had scored. I got a shock, because Jack was sitting there with two of his buddies and a couple of their kids. It was actually Jack who shouted ‘Harry Kane’ back at me,” in reference to the striker, who equalised from the penalty spot, and also has strong Limerick connections.

“I stepped outside, as I was a little bit starstruck,” Stephen admitted.

With just minutes to go Pierre-Emerick Aubameyang was hauled down in the box, giving Arsenal the chance to win the huge derby.

And Stephen sensed the opportunity to watch the defining moment with Wilshere.​

“We got a penalty in the last minute, and I asked if there was any chance I could watch the penalty with them [Jack’s group]. It was the last minute and I thought we were about to win the game. Unfortunately the penalty was missed. We were obviously all gutted,” he explained.

After the full-time whistle, Jack agreed to pose for a picture with Stephen, something the Dooradoyle man described as a “surreal” moment.

“I've followed his career throughout. I went up to him after the match and explained how I was a huge fan and asked if there was any chance I could get a picture. He said absolutely, and he was out of the chair before I even asked. I've always looked up to him. He did his ACL a couple of years into his career at Arsenal. I had the same injury a couple of years ago. You look to your heroes, and feel 'If you can do it, I can do it,” Stephen concluded.

Jack Wilshere has been seen a number of times in Limerick in recent months: he was spotted shopping at Gleeson’s Sports Scene over Christmas, and he dined in Alex Findlater’s Restaurant in January.