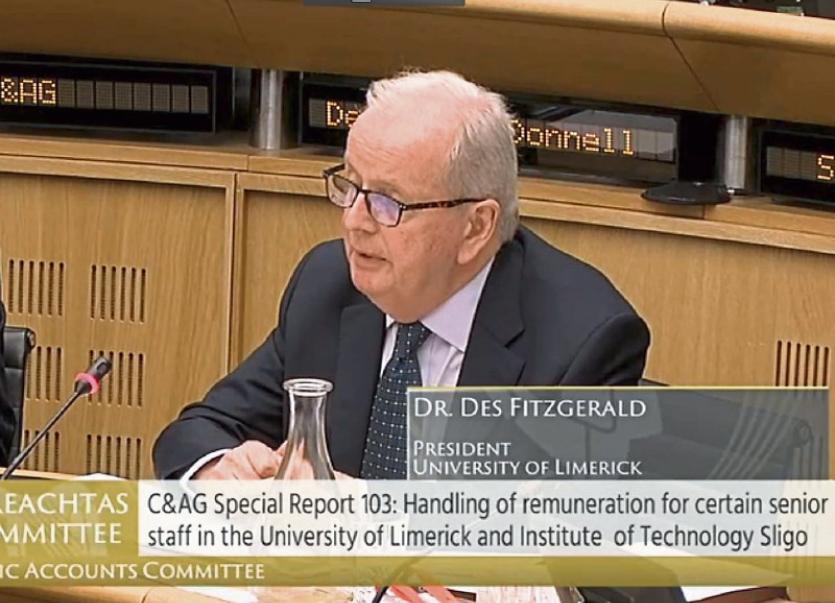 THE president of the University of Limerick has been formally asked to write to the Garda Commissioner to ask if the findings of a report that was highly critical of the university should be investigated for fraud.

Last Thursday, Dr Des Fitzgerald, appeared before the Dáil Committee of Public Accounts (PAC) over a number of long-running controversies related to the HR and finance departments at the university.

A special report by the Comptroller and Auditor General (C&AG), published last November, found UL previously “withheld relevant and material information” from the C&AG, the PAC, the Department of Education and its own legal team.

“I am sure all the policies of the university have to be cognisant of the law of the land, in particular, the existence of the Criminal Justice Act 2011,” Fianna Fáil Deputy Marc MacSharry said.

Following the publication of the report, the university received “expert legal advice” which said there was “no evidence of fraud”, the committee heard.

“That is the university's own legal adviser though and it is somewhat compromised when Professor Fitzgerald is doing the asking and it is his institution that could be guilty of it,” Deputy MacSharry said.

“No. I asked a legal adviser what the process would be should there be fraud and the reply was that there is no fraud,” Dr Fitzgerald responded.

The C&AG Seamus McCarthy had previously advised it was not within the remit of this office to determine if the findings of the report constituted as fraud, deputy MacSharry added.

“Will Professor Fitzgerald write to the Garda Commissioner after this meeting and ask that his organisation, specifically those with the expertise and investigative ability in fraud, would look at these matters,” he asked Dr Fitzgerald.

“I will take what Deputy MacSharry has said under advisement,” Dr Fitzgerald said.

Later during the day, Deputy MacSharry asked Dr Fitzgerald if the Revenue Commissioners been asked to consider benefit-in-kind implications of the findings of the report.

“I made a formal request that (the Garda fraud unit) be invited in to consider these matters and was told it would be taken on advisement. I look forward to following how that matter will be responded to,” he said.

“For me, it is not a case of advisement but a case of law or not law,” he added.

“In the interest of the integrity of the college, it would serve the college very well by bringing in its representatives, if for nothing else than to clear its good name.”

“If there are outstanding issues then we can deal with them using the full rigours of the law to cleanse any issues that there may be.”

UL deputy president Gerry O’Brien said one of the issues in the report had been raised with Revenue.

“We did raise it with the Revenue back in August and we are still waiting for a response from them,” he said. The university would also raise the "benefit in kind" implications, he added.