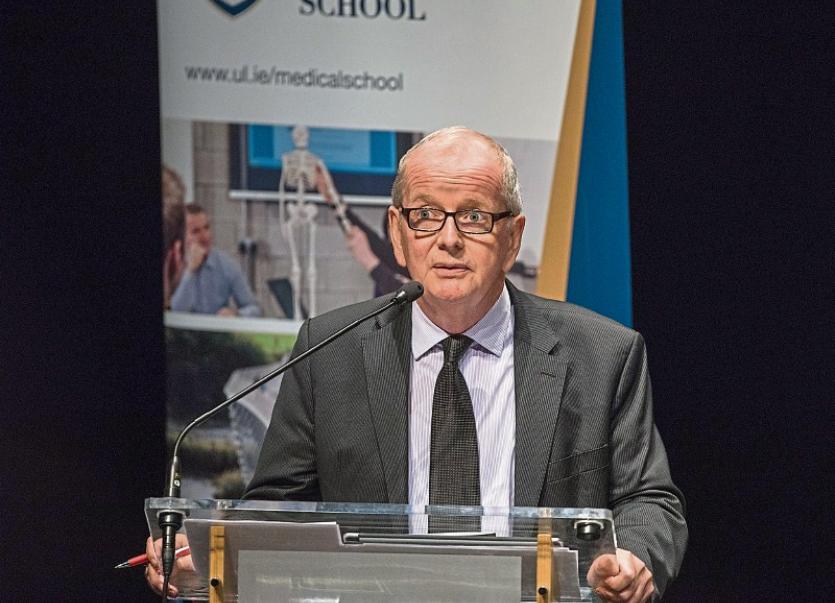 Questions: Dr Des Fitzgerald, the UL president, will appear before the Committee of Public Accounts (PAC) this Thursday

THE president of the University of Limerick, Dr Des Fitzgerald, is expected to face questions from TDs this Thursday about concerns over whether potentially thousands of students were given incorrect exam records over many years.

Dr Fitzgerald will appear before members of the Committee of Public Accounts (PAC), which has previously examined a number of long-running controversies related to the HR and finance departments at the university.

Serious concerns about the reliability of UL’s student records system were set out in a confidential report commissioned from Deloitte in 2015. A long-serving UL employee brought the Deloitte report to the attention of Dr Richard Thorn in July 2017.

At that time, Dr Thorn was conducting an investigation into various matters at UL, commissioned by the Higher Education Authority.

The employee told Dr Thorn about his repeated efforts to raise concerns about the stability of the student records system with senior management and the possible consequences, which included an unknown number of students potentially being given incorrect degree results, or being unable to progress to the next academic year.

UL uses a complex system known as QCA, which expresses a student’s result as a number between 0 and 4.0. A student’s QCA determines the class of degree awarded by UL. A low QCA can result in a student being required to repeat a year, or leave the university altogether.

In his published report, Dr Thorn noted that “potentially serious weaknesses” in the student records system had been flagged by different reports. He added that the employee, referred to as Person G, was “of the view that university management has not paid sufficient attention to the findings of these reports and that the Governing Authority has not been made properly aware of these issues”.

However, Dr Thorn concluded that while the matter was “worthy of attention by the university”, he was “satisfied that the issue is receiving appropriate attention and warrants no further investigation”.

The Leader sought to obtain the Deloitte report on the student records system under Freedom of Information legislation in October 2015, but UL declined to release it, for reasons of confidentiality and commercial sensitivity.

The university also rejected an appeal of this decision. When this decision was further appealed to the Information Commissioner, UL fought to prevent the report’s release and the appeal was turned down in December 2016.

Sean Fleming, chairman of the PAC, has confirmed that Person G was one of a number of UL whistleblowers who were invited to private meetings with committee members this Tuesday. He described this as “a listening process”.

The university was also criticised for misrepresenting the severance packages offered to two different staff members who were immediately rehired as highly paid consultants.

The matters occurred during the presidency of Dr Don Barry, who vacated his post in 2017.

The top-up pension arrangements were disclosed in a report by the Comptroller and Auditor General (C&AG) last November. Dr Fitzgerald has already criticised the payments and he will be questioned about the findings of the C&AG report from 9am this Thursday.

Dr Fitzgerald will also be asked about UL’s progress in implementing the recommendations of the Thorn report into HR, finance and other matters at UL. That report was published more than two years after UL sued the Limerick Leader over claims made by two whistleblowers from the finance department.

That High Court action was later dropped, but the two women – known as Persons B and C - remain in dispute with the university.

Persons B and C were among the whistleblowers invited to private meetings with PAC members this week. Leona O’Callaghan, a third whistleblower from the UL finance department who left her job in 2012, also met the PAC.

Ms O’Callaghan, known as Person A, reached a settlement with UL last year. She thanked Dr Fitzgerald at that time for “owning the hurt caused to me”.

Ms O’Callaghan first contacted the PAC about her concerns over being asked to pay questionable expenses to UL employees more than seven years ago, but her claims were brushed aside by Dr Barry in a letter written to the committee in April 2012.

UL confirmed this Wednesday that the university “was asked for, and has provided, documents relating to the student records system to the Public Accounts Committee”.

A statement added: “We are not in a position to comment on the employment status of any of our UL staff.”