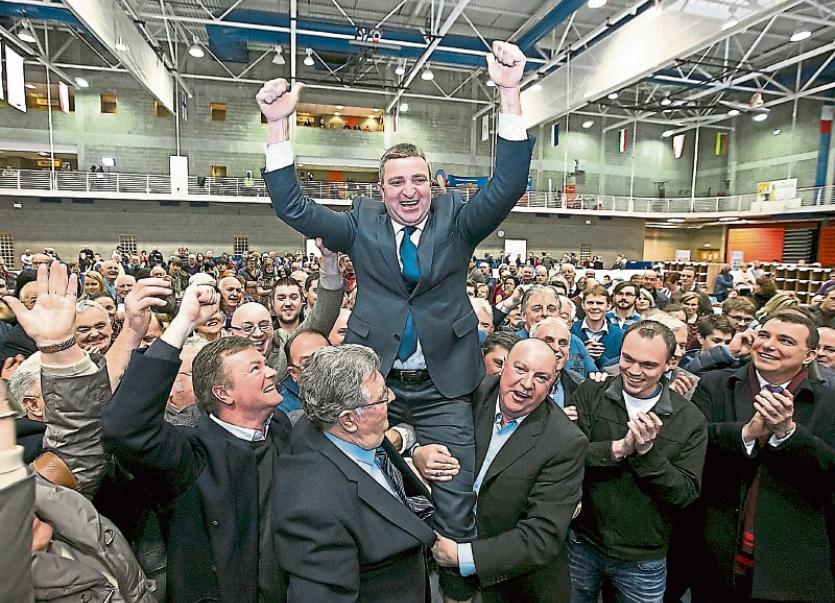 Niall Collins topped the poll in Co Limerick back in 2014 PICTURE: PRESS22

At a selection convention in the Woodlands House Hotel, Adare on Friday evening, the polltopping TD saw off competition from Cllr Eddie Ryan, Galbally and Aidan Gleeson, Ballyorgan.

One of this pair will be added to the ticket, as Fianna Fail returns to its traditional two-candidate strategy in the rural constituency. That decision rests with the National Constituencies Committee, who will interview the two and make a choice based on a number of factors.

Speaking to the Limerick Leader, Mr Collins said the party will be going “all out” to win the second seat in Limerick for the first time since his maiden general election in 2007 when both him and John Cregan secured a Dail berth.

“I'm delighted the membership has endorsed me as one of the Fianna Fail candidates in the constituency. I will be joined on ticket by either Eddie or Aidan shortly. I'm looking forward to working with either of them in the campaign,” he added.

Thanks to the @fiannafailparty members in Limerick for selecting me as a candidate for next general election last night in @WoodlandsHouse Adare. Well done also to Cllr. Eddie Ryan and Aidan Gleeson, one of whom will he added to the ticket in due course. pic.twitter.com/0onj10mWH0

First elected in the Bruff ward to the old Limerick County Council back in 2004, Mr Collins was elected to Dail Eireann at the first time of asking in 2007 – when he topped the poll. He was returned in 2011 and at the last election in 2016, where he once again led the pack.

The selection convention was chaired by Cork TD Billy Kelleher, who is expected to seek the Fianna Fail nomination for Ireland South in the European election, which is set for May 24.

All addressed the meeting.

Mr Collins is to face competition from sitting TDs Patrick O’Donovan and Tom Neville, who have been selected for Fine Gael.

Fianna Fail has already shown its hand in Limerick City, with Willie O’Dea and Mayor James Collins on the ticket.

A general election is unlikely this year, after Fianna Fail leader Micheal Martin confirmed the Confidence and Supply agreement with Fine Gael will go on until early next year, due to the ongoing instability over Brexit.