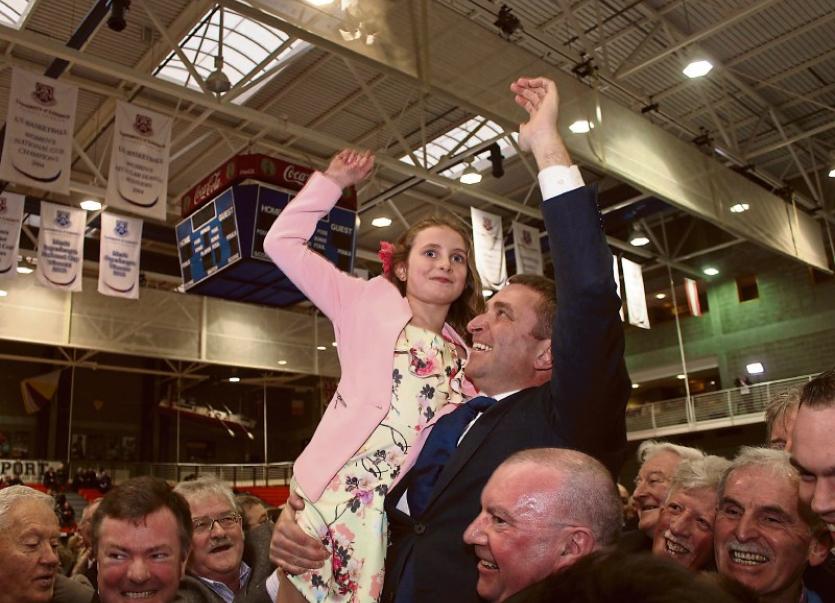 Niall Collins is hoisted high along with his daughter Kealon at the count in UL Picture: Michael Cowhey

THE POLL topper in Limerick county, Deputy Niall Collins, says that he does not think there were two Fianna Fail seats up for grabs in either of the two Limerick constituencies.

And the outgoing justice spokesperson, who took the first seat on the first count with 12,276 votes, is adamant that the party will not do business with Fine Gael or Sinn Fein.

"I can't see it happening. What this country wants is a change of emphasis from government. I can tell you on March 10 Micheal Martin with the nominee for Taoiseach,” said Mr Collins, whose first preference vote represents almost 28% of the valid poll.

"We have said and I have said personally under no circumstances are we going in to prop up a Fine Gael proposition.... We have worked long and hard to rebuild our credibility as a political party and I think all that would just go for nought if we were to turn around and step into coalition with Fine Gael."

In response to talk locally that, given the fine performances of both Deputy Collins in the county and Deputy O’Dea in the city, also a poll topper, that two candidates should have been run, the Patrickswell resident, says there is no regret that the party didn’t run two candidates.

“What you have to remember is the base which we are coming from. I came to this count centre five years ago and I got the last seat without reaching a quota and Willie O’Dea came to the count seat five years ago and he got the third seat out of four. We were well back.  We had a good campaign – we have done better than we expected. I think everybody recognises that including ourselves but up until a couple weeks ago we were stuck at 18% or 19% in the opinion polls so the strategy was to pick your candidates and target the seats that you feel you could gain.”

The 42-year-old father-of-two said he is - “very humbled” by the vote he got in the Limerick constituency.

“It surpassed what I expected and it just shows that you have to work very hard as I do between elections. You can’t just rock up to an election a month beforehand and expect that you are going to get elected or do well. I want to thank everybody who did vote for me and the entire Fianna Fail organisation and my network of canvassers and right supporters across the constituency and my wife and my kids and family because it is a very tough couple of weeks and it is a tough job – but days like this make it worthwhile.

“It’s a very long campaign. There is one certainty in politics – there is always an election coming down the road. Really it is nearly like a rolling campaign now from election to election.  The tempo doesn’t drop too much between elections. You have to keep abreast of all the issues – it’s a very vast constituency, covering the whole of County Limerick from one side up near Rearcross, Oola and Doon right down  to Kilbehenny and over to Galbally.”

In relation to the wider political landscape, Deputy Collins said that nationally “we are very pleased”.

“Our headline target was to double the number of seats in Dail Eireann and it looks like we are going to achieve that – we may exceed it by one or two seats which would be great.  It is testament to the leadership of Micheal Martin. I think he outplayed the expectations that were on him by many people. I think he resonated with people.”

“We ran 71 candidates across 40 constituencies. We have ran the second highest number of candidates. Fine Gael have more than us  but from that point of view based on the numbers I see here today – I don’t see that there was two seats in County Limerick and I don’t think that there was two seats in Limerick city either.  Not on this occasion, but there will be in the future.”

Deputy Collins arrived to the University of Limerick Arena to huge applause at 4pm this Saturday. He had been monitoring the tallies from his home in Patrickswell.

“My brother James was here to keep an eye on the tallies,” said Deputy Collins who was accompanied at the count centre by his father Sean, wife Eimear, and daughter Kealon, 8, and son Conor, 10.

Kealon, who canvassed with her dad in Patrickswell, said she was “very proud” of him.

Deputy Collin’s wife Eimear said it was “a proud moment for the family”.

“We are so excited and delighted for him. He ran a great campaign and had phenomenal support and a wonderful team. It is a real privilege to represent the people of Limerick – a huge, huge honour.” 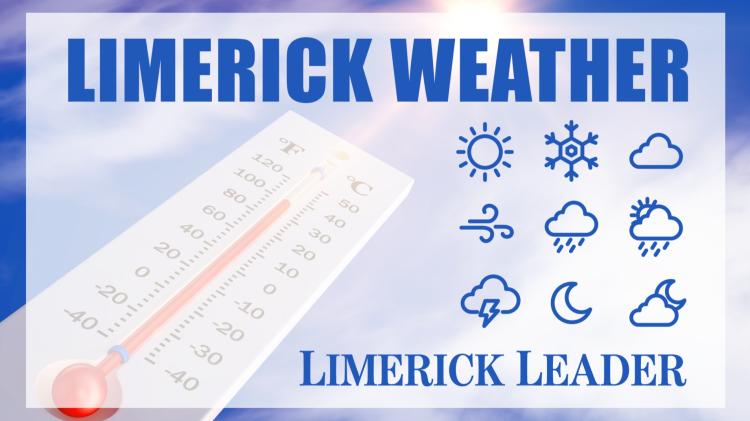