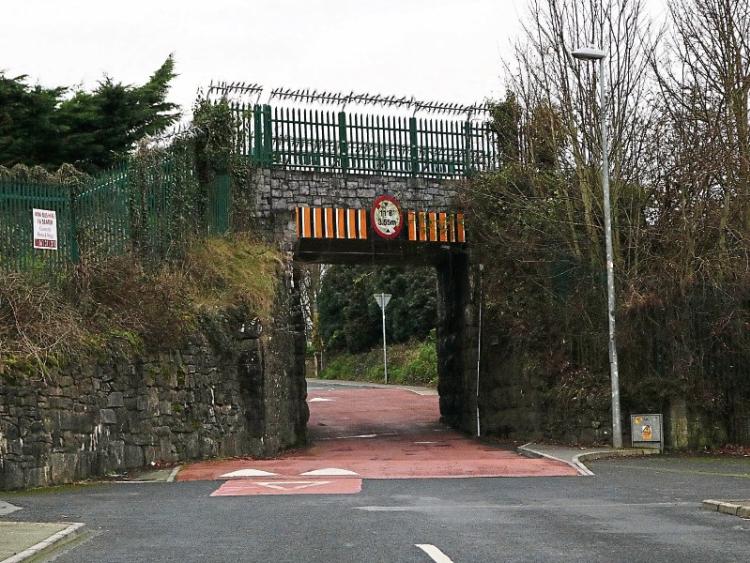 Limerick City and County Council is planning to build a pedestrian tunnel next to the railway bridge Picture: Michael Cowhey

PROPOSALS are being drawn up to construct a tunnel for pedestrians adjacent to a narrow railway bridge at a traffic blackspot in Limerick.

Safety concerns have been repeatedly raised in relation to the bridge in Rhebogue, which is only wide enough to accommodate one vehicle at a time.

Cllr John Costelloe, who raised the plans to build the pedestrian tunnel at a meeting of the Metropolitan District, says action needs to taken before someone is killed or seriously injured.

“It’s a blackspot, it’s an absolute death trap and something needs to be done,” he said.

Former Mayor of Limerick, Cllr Kieran O’Hanlon, agreed with his colleague and he pointed out that a large number of pupils are passing under the railway bridge on a daily basis as they walk to and from schools in the area.

In a written reply to Cllr Costelloe an official with Limerick City and County confirmed plans are to be drawn up, under the Limerick-Shannon Metropolitan Area Transport Strategy, which, if approved, would see a ‘pedestrian walkway’ being constructed to the side of the railway bridge.

While the project is being progressed locally, the council says funding in the region of €500,000 will be required from central government and other agencies such as Transport Infrastructure Ireland and Irish Rail.

Additional lands will have to be acquired by the local authority to facilitate construction of the proposed tunnel.

“It’s an absolute death trap and I’m surprised nobody has been killed there and the reply which I received (from the council) is favourable enough and I'm glad there appears to be some light at the end of the tunnel” Cllr Costelloe told the Limerick Leader.

”This is an ongoing issue for many years and it’s crazy stuff and I welcome the fact that funding is to be sought from central government and it’s one of my aims to get that sorted out,” he added.

It’s understood there is no definite timescale to complete the project.