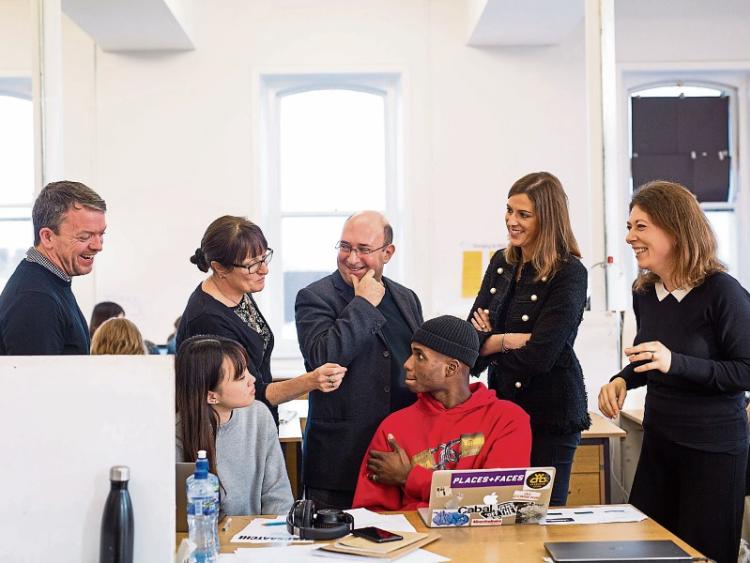 THE world famous creative agency tasked with delivering an ambitious new brand for Limerick have said they hope it will “be able to articulate very clearly what Limerick stands for and how Limerick wants to position itself on the global stage”.

In a lengthy interview with the Limerick Leader, Mary Harris, managing partner at M&C Saatchi, outlined her belief that it “wouldn’t be right to have something shiny or airbrushed, because that wouldn’t be true”.

The leading London-based agency has a 20 year track record of place brand development and strategy, having worked with New Zealand, Abu Dhabi, Malaysia, the USA, The Kingdom of Bahrain and others to develop their brands.

M&C Saatchi were appointed to create a new brand for Limerick “that will reflect its resurgence as a thriving economic and visitor destination” by the Council in August, following a tender process. It was hailed as a major statement of intent regarding the city and county’s ambition to win more indigenous and international investment and attract more people to live, work and visit here.

After a series of visits to Limerick and dozens of meetings with stakeholders, business leaders, key institutions and organisations and surveys conducted with many more people, Ms Harris say the creative team are “feeling good about where we are”.

“Every time you scratch the surface, there is another incredible story emerging about Limerick and that is something that has been so valuable to us,” she explained. “Because obviously with brand design, you are trying to dig down and get to the DNA of a place. Brand design has to come from what is really, really true about a place - otherwise it won’t stick and there is no point. You can’t make something up, you can’t have something that isn’t true to that place,” she added.

Mary and her creative team of David Glass and Alex Lemecha-Sim, have immersed themselves in Limerick and embraced all aspects of the city and county’s history - both positive and negative.

“Right from the very beginning, we just felt there was something special and interesting about Limerick. That there was a sense of untapped potential,” she explained. “This real sense of resilience and this feeling that Limerick always comes back bigger and brighter. That tough resilience and that grit is matched with a quite humble, not in your face, not braggy, kind of real warmth and friendliness and connectedness. And we feel that we have been plugged into this network.

“It wouldn’t be right to have something shiny or airbrushed or plaster over all of the roughness, the urbanness of Limerick, because that wouldn’t be true. And I know it wouldn’t be right to have something arrogant and chest-beaty - that is not Limerick. Those are wonderful parts of what Limerick is and why it slightly reminds me of Detroit in a way, in that actually brands and business came to Detroit because they wanted something that was a little bit edgy and had some character.

Laura Ryan, head of marketing and communications with the council, explained: “We need a strong umbrella brand for Limerick that is world class and one that reflects the scale of our ambition. Limerick has really become the urban success story of the last five years and now has a great new story to tell. The fact that M&C Saatchi, one of the world’s leading agencies wanted to work with Limerick says a lot about where Limerick has arrived at.”

The team have already taken and distilled that information they have soaked up and are now writing up a plan for the roll-out of the brand, which is expected in mid-2019. They have started to show some of their work to various groups, and have received positive feedback. They recently worked with students at LSAD to get some creative input, and Ms Harris said it was “fantastic and inspiring, working with the students” in a workshop as part of their brand design process and consultation.

She explains that the creative agency’s “philosophy is all about brutal simplicity, all around the idea that it is easier to complicate than to simplify. But it is the simple ideas that go into your mind faster and stay there longer”.

M&C Saatchi’s bid for the tender to create the brand identity was the “most economically advantageous” the Council received and it is clear that there is a great passion behind the project for the world famous agency, who Mary Harris says have “fallen in love with Limerick”. She cautions, however, that there must be support for what is created.

“The launch is going to be such an important moment for us to get right - how we communicate that, how we unveil that positioning to the world,” she explained.

“It has to be true; I don’t Limerick has had something that really brings everything together to really define what it stands for and where it should be going.

“I think it comes down to everybody thinking, ‘now is the time to be confident, now is the time to really recognise that we have something special’ and we must support that and we are excited about it and ought to get behind it.