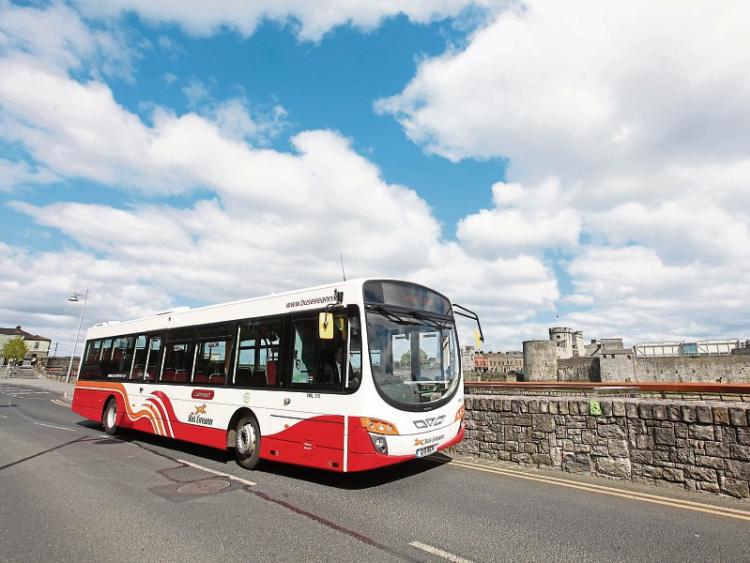 THE private sector may be called in to operate some of Limerick’s bus services, as complaints about reliability continue.

Following on from a recent call from former top civil servant John Moran for Limerick City and County Council to take over the operation of services from Bus Eireann, it has now emerged that private operators may be drafted in.

The National Transport Authority is working in collaboration with Limerick Council in a bid to devise a Limerick Transport Strategy to try to bring up customer satisfaction rates – which at 72% are the lowest in all cities in the state.

Already a handful of Limerick city bus routes are operated by the private sector, including two on the corridor between the centre and the university.

A spokesperson for Limerick City and County Council said: “We are in the initial stages of working with the National Transport Authority to develop a new integrated transport strategy for Limerick. This will take into account all modes of transport and will plan for the future development of the greater Limerick city area.”

In a consultation paper, the NTA stated that the main factor which brought down the satisfaction rate in the Limerick area was reliability, and it said it was is currently considering putting some of Limerick’s bus services up for public tender.

Speaking about this lack of reliability, Limerick Smarter Travel’s Smarter Travel Coordinator, Sadbh Hanley, said: “Although there are areas of bus priority approaching the city, we are currently underserved when it comes to dedicated bus corridors.

“This means that our city and regional buses are subject to the same congestion as private vehicles leading to timetable delays and associated dissatisfaction.”

Ms Hanley also said that Limerick Smarter Travel will be feeding into the Limerick Transport Strategy to tackle the issue head on.

But Sinn Fein councillor Séighin Ó Ceallaigh, whose father is a bus driver, has said he would be against further privatisation here – and he supported Mr Moran’s call for the local authority to take control.

He said: “Be under no illusions, Fine Gael want to privatise our public transport service. They have shown that in Dublin. It’s something that is 100% coming to Limerick. We are going down a road where many bus services may not exist anymore, as it will all be about profit.”

Mr Moran made the call for Bus Eireann to be stripped of the responsibility of operating Limerick’s network, with passengers complaining of a litany of delays and no-shows on the network.

Fares on the services increased last week to almost €5 for a day ticket and €2.40 for a single ticket – although the latter is just €1.68 with a prepaid Leap card.

Speaking to the Limerick Leader, Mr Moran said: “It makes no sense to have a local authority looking after roads and transport like cars, but not able to make co-ordinated decisions on their own about public transport. As the local authority in Limerick, I think the people of Limerick expect them to be answerable for late buses.”

He wants more regular services in the city centre, adding: “The reality is if we want to get to a more modern city we should be seeing electric buses on the streets of Limerick and enough of them so that people never feel it’s quicker to grab a car to go places.”

In response, a spokesperson for Bus Eireann pointed out journeys in Limerick were up by 20% since the start of 2017, with further improvements to the network planned for early 2019.

“These will address some of the reliability and punctuality concerns, and are being introduced in conjunction with the NTA,” the spokesperson added.

The spokesperson acknowledged delays can happen due to “unusually high” levels of traffic congestion.

“All services are continually monitored in order to ensure service reliability and punctuality, this function is overseen by staff in our control office in Limerick.

“Where required, necessary interventions are made in order to ensure service levels are maintained and passenger disruption is minimised,” they added.

Dermot Healy, a national executive member of the National Bus and Rail Union, said Mr Moran’s comments were “highly irresponsible and also shows a distinct lack of knowledge on the issue and does a disservice to those who are genuinely interested in contributing positively to the debate to enhance and improve the provision of public transport in this city and its environs”.

“The lack of decent Public Transport infrastructure in this city such as Quality Bus Corridors (QBCs) and bus lanes conflicts with the at times smooth running of services in this city with buses having to take their place in the queue of traffic once the buses have moved off the token gestures of bus lanes that are currently in place,” he said.